A one-hour penalty slapped on Wild Oats XI stripped the super-maxi and her crew of its first-across-the-line title, which went to LDV Comanche after a record-breaking run down Australia’s east coast.

LDV Comanche was named the line honours winner of the Sydney to Hobart yacht race in dramatic circumstances on Thursday when Wild Oats XI was stripped of the title over a near-collision.

Wild Oats crossed the line in record time late on Wednesday, but an international jury handed the super-maxi a one-hour penalty after Comanche protested over an incident between the 100-footers early in the race.

It is just the third time the result of the annual race, which has been held since 1945, was decided by a protest, and the first since 1990.

Comanche owner and skipper Jim Cooney said that the complaint was about a near-miss involving his yacht and Wild Oats, which appeared to tack too late when exiting Sydney Heads on Tuesday.

An international jury convened on Thursday heard evidence from both crews before finding in favour of Comanche, saying Wild Oats had “failed to keep clear [of Comanche] while tacking.”

The jury’s chairman John Rountree said Wild Oats also did not comply with the rules requiring the super-maxi to make a two-turn penalty after breaking the initial rule.

“Wild Oats XI is … penalised a time penalty of one hour to be added to her elapsed time,” he said.

Comanche finished 26min and 34sec behind Wild Oats’ 1 day, 8hrs, 48min and 50sec, enough to seal victory after the one-hour penalty was imposed.

Cooney said the jury’s decision was “an enormous relief … to feel that we did deserve to win.”

“I didn’t expect to protest in order to win the race,” he said, adding that the “rules are there to protect people’s lives… and if we can’t rely on that it’s a difficulty in the sport.”

Wild Oats skipper Mark Richards said his crew was “very disappointed” but that they would “take it on the chin.”

Richards denied the situation had been dangerous, but added that he could “see the jury’s point of view.”

“The whole situation was under control. It was just one of those tricky situations in a yacht race and that’s what happens, and we all paid the price.”

The decision is a blow to Wild Oats’ owners, the Oatley family, after the super-maxi was forced to retire from its previous two races.

“We’d just like to congratulate Jim Cooney and his crew for their success, and move forward,” owner Sandy Oatley said.

This is the second time in three years that Comanche has won line honours, although the 2015 triumph was under the ownership of Netscape founder Jim Clark and wife Kristy Hinze. 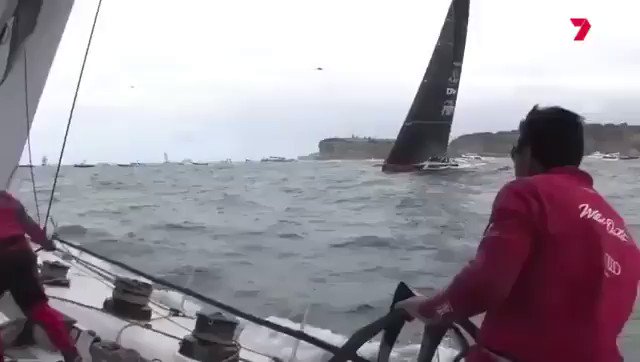 Handicap title not yet decided

Attention now turns to the Tattersall Cup, awarded to the overall winner, with Matt Allen’s new TP52 Ichi Ban among the favourites.

The handicap honour goes to the vessel that performs best according to size, giving smaller boats a chance to prove their worth in what is regarded as one of the world’s toughest yacht races.

“This is the best Hobart race I have ever done… I’ve never seen conditions like it,” Ichi Ban owner-skipper Allen said, after sailing into the Tasmanian state capital early on Thursday.

“I think the breeze is lightening off though, and they [the other Tattersall Cup challengers] won’t come home as fast as we did.”

Gold down on stronger U.S. dollar