Militants have stepped up attacks in contested Indian-ruled Kashmir, including raids on the homes of police officers, amid a spike in violence after the army allegedly tied a man to the front of a jeep as a human shield.

Police have filed a case against an army unit after soldiers in the Himalayan region were accused of seizing a 24-year old shawl weaver on April 9, before strapping him to the front of their vehicle and parading him through villages.

A video of the episode widely circulated on social media exemplifies for many viewers the human rights abuses allegedly committed by Indian security forces battling to contain a separatist insurgency now in its 28th year.

Army spokesman Lieutenant Colonel Rajesh Kalia said the video’s authenticity was being ascertained, adding, “Action will be taken against those found guilty of misconduct.”

Police fired tear gas on Monday to scatter students in the region’s main city of Srinagar, the latest outbreak of protests since demonstrations last week after a botched by-election in which at least eight people were killed.

Some colleges were forced to close.

Over the weekend two more videos circulated on social media showing workers of the ruling political party in the Indian state of Jammu and Kashmir renouncing mainstream politics, one of them beside a man wielding a gun. 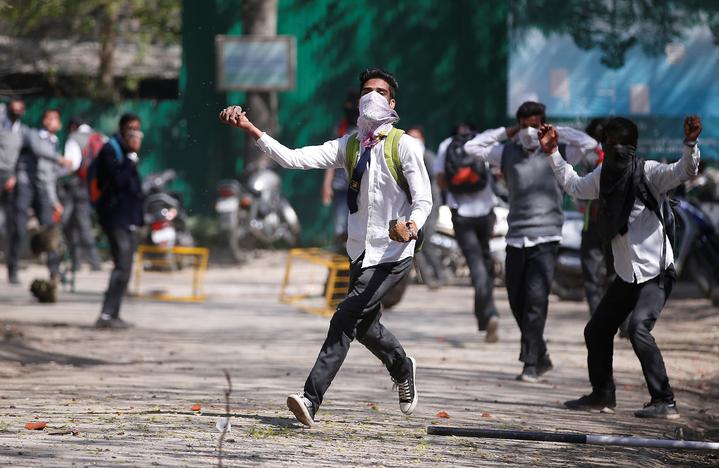 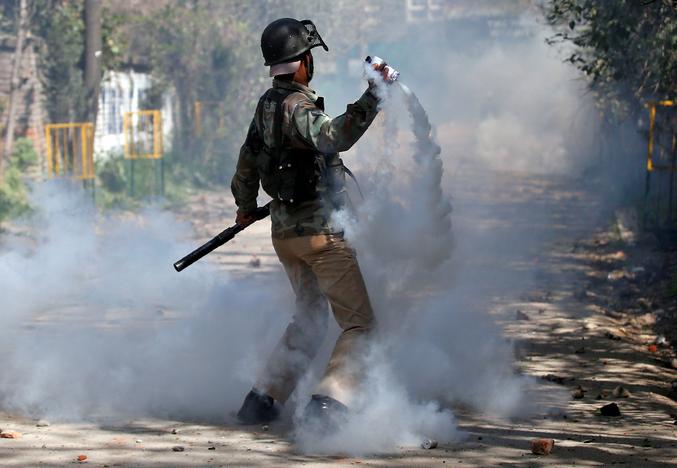 Another video, allegedly showing the killing of a 17-year old by paramilitary officers during the April 9 by-election, has also stirred anger. Reuters could not confirm the veracity of the videos.

The clashes in Kashmir, a region divided between India and Pakistan but claimed in full by both, come ahead of the hot summer months, when protests surge.

Violence has declined since the early 2000s, when thousands died each year, but disillusionment and anger against Indian rule is widespread, and the separatist revolt is now largely homegrown.

Soldiers picked up the shawl weaver, Farooq Ahmad Dar, near the home of a relative after he voted, he told media. “Look at the fate of the stone-pelter,” a soldier is heard saying over a loudspeaker in the video while Dar is tied to the vehicle.

“This is a phenomenon that has been going on for the last 27 years,” Khurram Parvez, a leading Kashmiri human rights activist jailed last year, told Reuters.

“This is not the first human shield case. What is different now is that this case has been documented, thanks to social media.”

The state’s police chief on Sunday told officers to avoid visiting their own homes in South Kashmir, after militants stormed the houses of at least four officers.

Militants also shot dead a lawyer affiliated with an opposition party and a former counter-insurgency commander, police said. A worker of the ruling party was killed late on Saturday.

Azerbaijan sues Armenia in ECtHR for crimes against humanity