The UN Security Council on Saturday unanimously adopted a resolution demanding a 30-day ceasefire “without delay” in Syria, in a bid to allow for humanitarian aid deliveries and medical evacuations.

What does the resolution say?

Resolution 2401 demands an immediate ceasefire for “a durable humanitarian pause for at least 30 consecutive days throughout Syria” to enable the safe, unimpeded and sustained delivery of humanitarian aid and services and medical evacuations of the critically sick and wounded.

According to the resolution, the ceasefire does not apply to military operations against ISIL, al-Qaida and Al Nusra Front and their associates, and other terrorist groups as designated by the Security Council. After the vote in New York, activists said air strikes were continuing.

The resolution also demands the immediate lifting of sieges on populated areas, including Eastern Ghouta, the last major rebel stronghold, which has seen heavy bombardment in the past week. 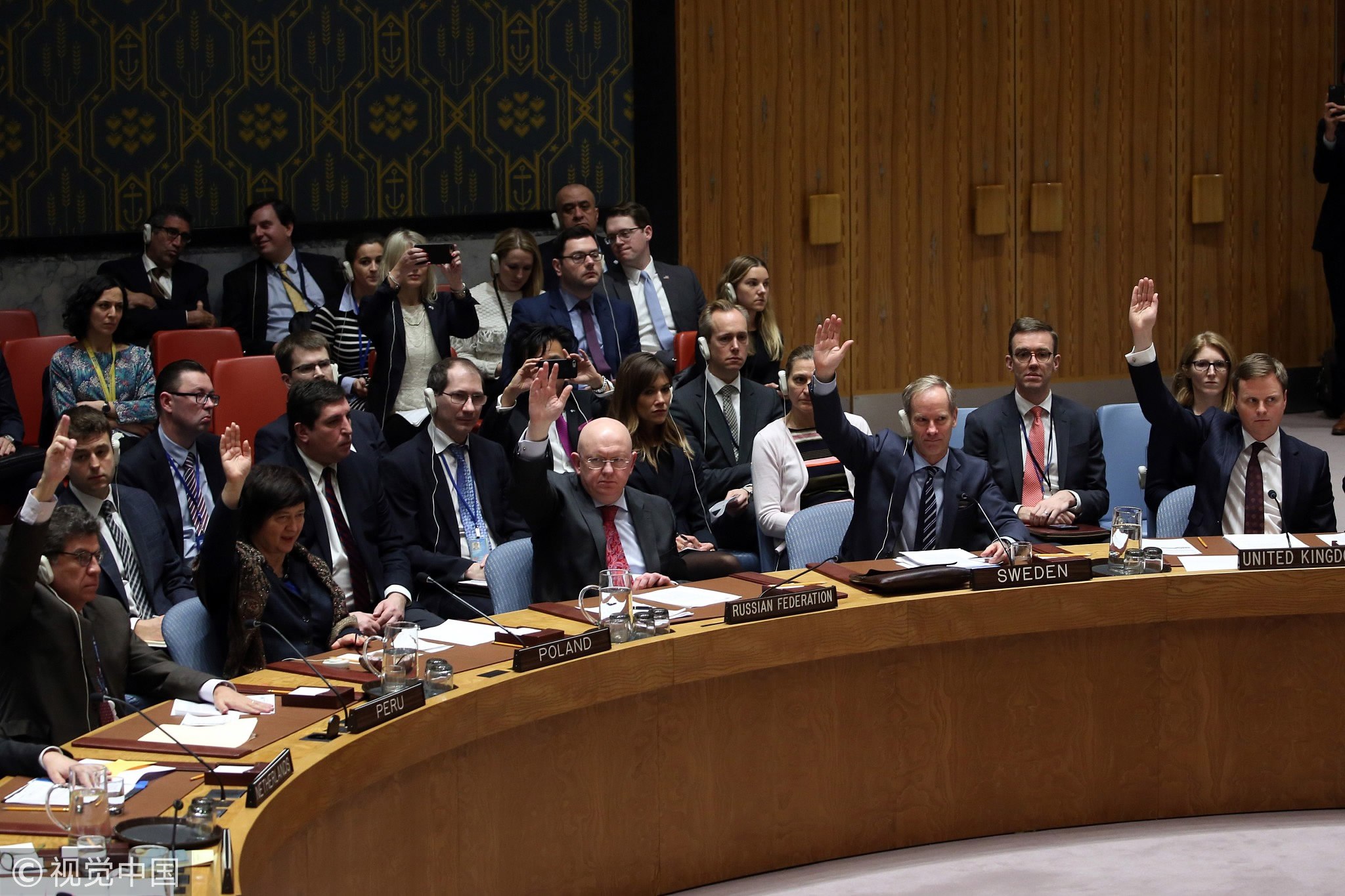 Ambassadors of Poland, Peru, Russia, Sweden and the United Kingdom vote in favor of Sweden’s Syria ceasefire resolution during a Security Council meeting at the UN HQ in New York, United States on February 24, 2018. /VCG Photo‍

Is the resolution feasible?

“It would be naive to think that internal Syrian questions can be solved by a resolution,” said Nebenzia following the vote, adding that Moscow had “supported the intentions” behind the document, but that no ceasefire was possible “without agreement from warring parties.”

US envoy to the UN Nikki Haley slammed Russia for “obstructing the voting,” saying “in the three days it took us to adopt this resolution, how many mothers lost their kids to the bombing and the shelling?” 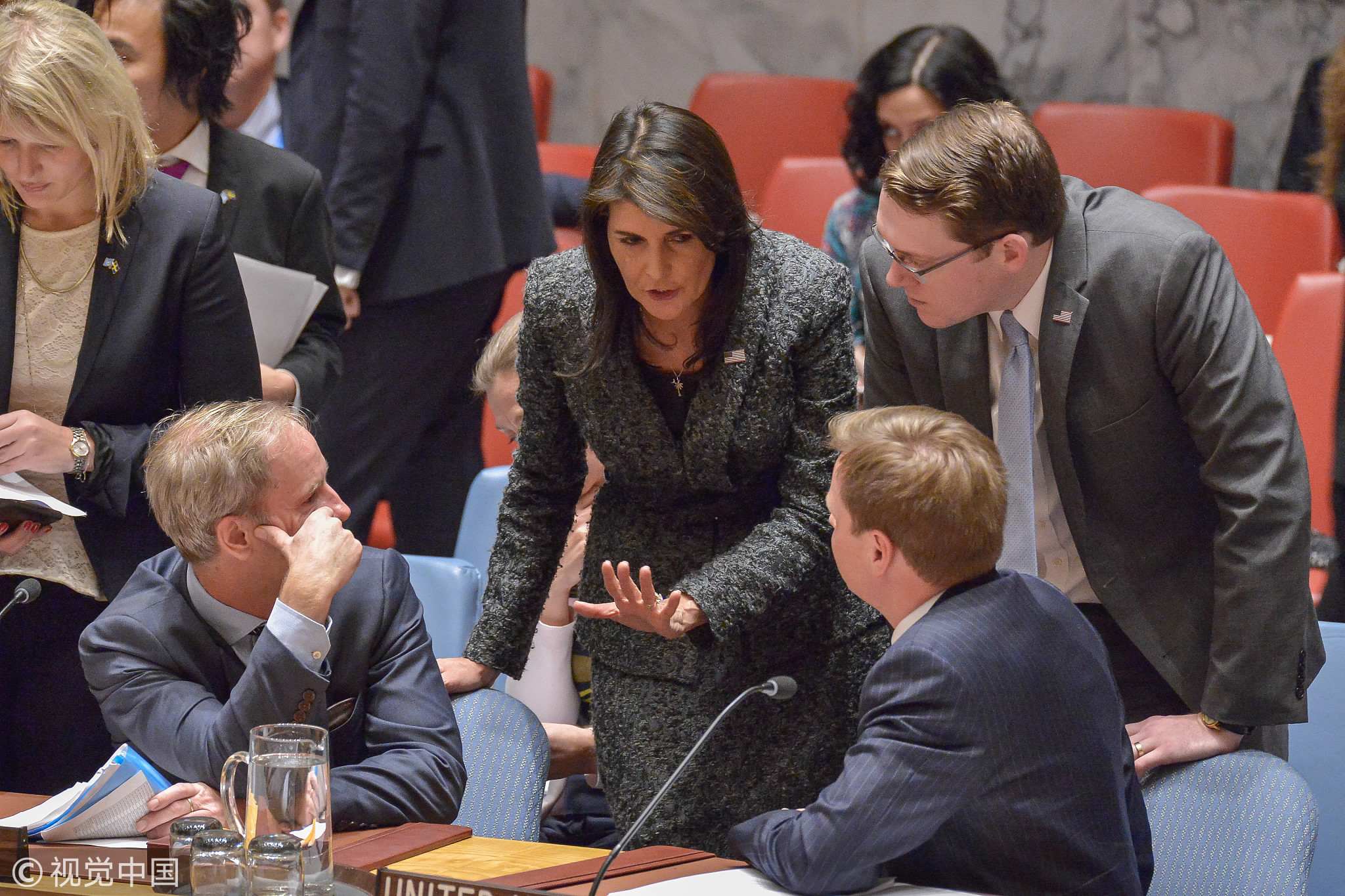 UN Secretary-General Antonio Guterres on Saturday welcomed the adoption of the resolution, saying on Twitter “I welcome the Security Council’s resolution on a ceasefire in Syria and call for all sides to allow the immediate delivery of humanitarian aid.”

The spokesperson of the UN chief said in a statement that “The secretary-general stresses his expectation that the resolution will be immediately implemented and sustained, particularly to ensure the immediate, safe, unimpeded and sustained delivery of humanitarian aid and services, the evacuation of the critically sick and wounded and the alleviation of the suffering of the Syrian people.”

Chinese envoy to UN calls for full implementation of the resolution

“Going forward, the international community should work together to ensure the full implementation of the just adopted Resolution 2401 so that it can play a positive role in improving the humanitarian situation in Syria,” Ma told the Security Council after the vote. 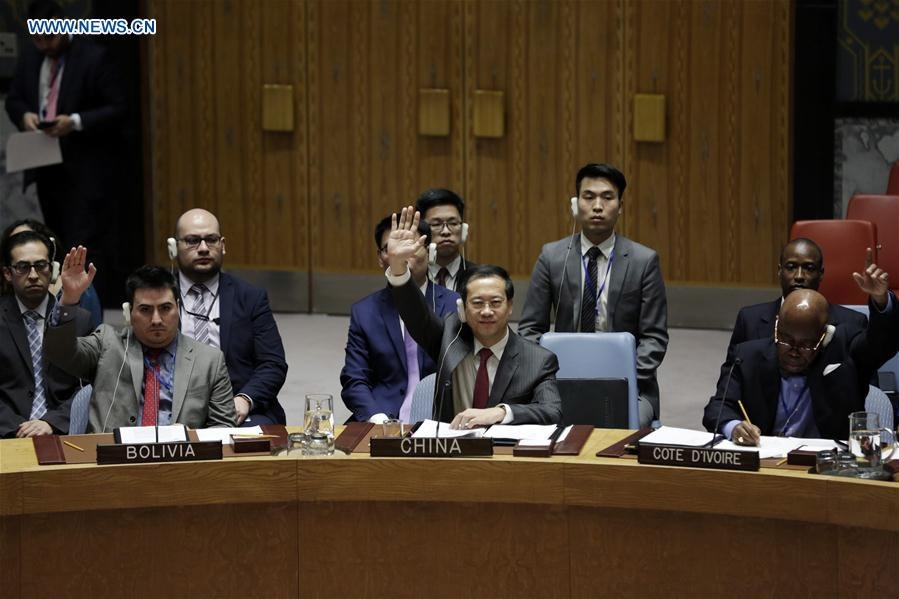 China’s permanent representative to the United Nations Ma Zhaoxu (C, Front) votes in favor of a resolution demanding a ceasefire across Syria at the UN headquarters in New York, on February 24, 2018. /Xinhua Photo‍

A political settlement is the only way out, he stressed. “The international community should support the Syrian parties in seeking a swift solution that is acceptable to all parties under UN mediation through a Syrian-owned and Syrian-led political process to end the suffering of the Syrian people as early as possible.”

Meanwhile, the fighting shows no sign of letting up in Syria. At least three people were killed and 60 injured after Syrian rebels in Eastern Ghouta fired more than seventy bombs into the capital Damascus on Saturday.

Rebels targeted the downtown area as well as evacuation passages for civilians. Meanwhile, the Syrian Observatory said a government warplane launched a new round of strikes on Eastern Ghouta shortly after the Security Council vote. Government attacks on the area have caused hundreds of deaths since mid-February.

The fire and fury in Eastern Ghouta

Eastern Ghouta is one of the largest and the closest rebel-held areas to the capital. Its location allows rebels to mount several attacks on Damascus and its suburbs – from way back in 2012 till most recently.

The enclave is held by several rebel factions: Islam army, al-Rahman Legion and al-Nusra front – al-Qaeda’s Syrian affiliate. Their military weight in Ghouta has given these rebel factions a seat at the table in the Astana peace talks.

Eastern Ghouta has been one of four de-escalation zones in Syria since May 2017. But fighting in and around the region hasn’t stopped. Rebels continue to shell Damascus with mortars and rockets, rendering it on several occasions a ghost town.

Since January this year, videos of Syrian army reinforcements heading to Damascus started surfacing. And many experts are saying this is the biggest, military build-up of the war.

The target is a large-scale military operation is eastern Ghouta and on February 18, the scale of the offensive became clear. Daily air and artillery strikes that rebels say are unprecedented have claimed hundreds of civilians lives.