UK Prime Minister Theresa May said on Wednesday that 23 Russian diplomats will be expelled from the country, giving them one week to leave over the ex-Russian spy poisoning case.

“The Russian state was culpable of the attempted murder” of spy Sergei Skripal and his daughter Yulia, May told lawmakers.

“We will not tolerate a threat to British life on UK soil,” she added.

All 29 NATO countries urged Russia Wednesday to answer Britain’s questions over the poisoning of an ex-spy in what they called the first ever offensive use of a nerve agent on the alliance’s territory.

The joint statement by the 29 member countries of the US-led alliance said the attack against Skripal and his daughter in Salisbury, southwest England, was a “clear breach of international norms and agreements.”

Britain has called for an urgent meeting of the UN Security Council to discuss the poisoning of a former spy in Salisbury, the British Foreign Office said Wednesday.

The action came after Russia failed to respond to a Tuesday midnight deadline set by May to explain how an alleged Russian-made nerve agent was used in the attack. 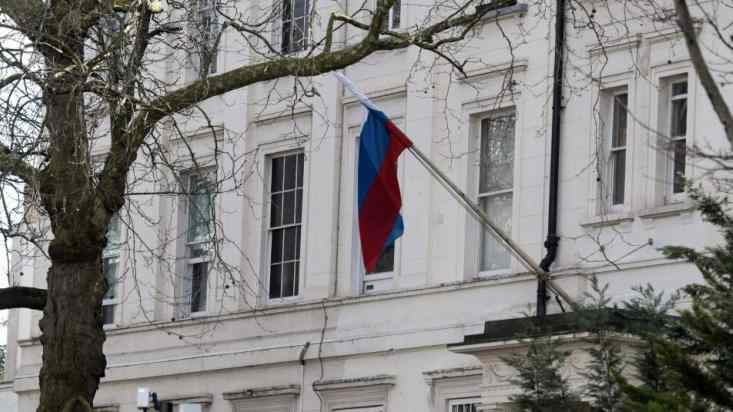 The Russian consulate is pictured in London on March 14, 2018. /AFP Photo

Skripal, 66, and Yulia, 33, were reportedly found slumped on a bench in Salisbury city center in Wiltshire on March 4. British police said they remain critically ill in the hospital.

The prime minister is set to announce a series of measures against Russia before Members of Parliament (MPs) later Wednesday.

May told MPs on Wednesday that the investigation is under way and vowed to bring perpetrators to justice.

British media had earlier reported that Britain could launch a cyber attack against Russia.

In response, the Russian Embassy in London said Tuesday that talk of cyber attacks is a “serious concern,” and urged Britain to carefully consider the consequences of such attacks.

“Not only is Russia groundlessly and provocatively accused of the Salisbury incident, but apparently, plans are being developed in the UK to strike Russia with cyber weapons,” the embassy said.

In Russia, the Kremlin’s spokesman, Dmitry Peskov, had also denied the country’s involvement in the attack.