Ankara and Athens are passing through a delicate period as their warplanes and boats face off in disputed airspace and maritime zones. Here is the historical background of the tensions and Ankara’s approach to its neighbour.

A Greek Mirage 2000-5 fighter jet crashed in the Aegean Sea on April 12 and its pilot was killed, worsening the already strained ties between Turkey and Greece.

Greek officials said the aircraft was returning from a mission to intercept Turkish fighter jets, mentioning intensified mock dogfights in recent weeks amid a spike in tensions.

“He fell … fighting to defend national sovereignty and territorial integrity,” he added.

But Ankara denied having a role in the crash that occurred off the Aegean island of Skyros. “There was no Turkish warplane nearby when the accident happened,” Turkey’s Anadolu Agency reported, quoting security officials.

Turkish Premier Binali Yildirim called his Greek counterpart Alexis Tsipras and conveyed condolences over the death of the Greek soldier.

A day after the accident, three young men from Greece sailed in the Aegean Sea, which lies between the two countries and raised a Greek flag on a disputed islet near the Turkish town of Didim, it was, they said, “in honour of dead pilot.”

These incidents may have a potential to lead to an armed conflict between any rival neighbours, however, when it comes to Turkey and Greece they have become the “daily routines of two nations” in recent months.

On Saturday, Erdogan called on Greece, “We need peace now. Besides, our peace with you is like no other. I don’t want any more tensions,” during an interview with a Turkish local TV channel.

Athens answered the next day.

“From the Turkish president’s statements yesterday we keep the positive elements: his shift towards peace in the Aegean and the support for dialogue between the two countries on important sectors, among which security,” said a statement from the Greek prime ministry.

Ankara and Athens, neighbours and NATO allies, share an about 200-kilometre land border in the north, while they are separated by the Aegean Sea in the south.

They are at loggerheads over a variety of issues which range from the ethnically divided Mediterranean island Cyprus to airspace and mineral rights in the Aegean.

Greeks lived under rule of the Ottoman Empire – founded by Turkish tribes in Anatolia – for nearly 400 years, the nation won its independence in 1821.

The land border between the two countries and administration of Aegean islands have been agreed after World War I with the Lausanne Peace Treaty, signed in 1923. With the treaty, islets and rocks have left “to the common benefit of the neighbours.” Ever since, they have been a matter of dispute.

Both countries have accused each other of border violations for decades, they came to the brink of war a few times, one recently.

In 1996, the Greek government issued a bellicose statement regarding the status of the Kardak islets – also known as Imia and lie just seven km (3.8 nautical miles) from the Turkish resort town of Bodrum in the southwest – after a Turkish cargo vessel went ashore nearby.

First Greek journalists, then Turkish ones hoisted their countries’ flags on the rocks, increasing tensions.

Athens and Ankara respectively deployed military forces there in a sign of imminent armed confrontation.

During the last days of the crisis, a Greek helicopter crashed in the area due to a technical failure and three soldiers aboard were killed. International actors intervened, troops were withdrawn.

More than two decades later, on January 17, a Greek patrol boat banged into a Turkish one near the islets of Kardak. No casualties were reported.

Ten days later, on the 22nd anniversary of the helicopter accident, the Turkish Coast Guard teams blocked right-wing minister Kammenos, who was heading to the area in an assault boat to lay a wreath in memory of the fallen soldiers of the 1996 incident.

In early February, another Greek coastguard boat collided with a Turkish vessel near the islets. Nobody was hurt in the collision, the Greek boat suffered damage.

The islets consist of two rocky formations that cover a total area of 40,000 square metres.

They are not even appropriate for human habitation, but they have turned out to be symbols of sovereignty rights in the Aegean Sea for the two nations.

“Neither these tensions would ease nor they would turn to an armed conflict in the short term. We must get used to living with it. Turkey’s relationship with Greece has always been like this historically. Turkey has been good at managing crisis with Greece at all times,” Tarik Oguzlu, a professor of political science and international relations at Antalya Bilim University in southern Turkey told TRT World.

The demarcation dispute of the Kardak rocks reached a flashpoint during January and February, but two NATO allies have a bigger challenge in the Mediterranean Sea.

It is the third largest island in the Mediterranean Sea after Sicily and Sardinia, covering 9,251 sq km. There are more than 200,000 Turkish Cypriots and over 700,000 Greek Cypriots living on it.

The island was ruled by the Ottoman Empire from 1571 until 1878, Greek and Turkish Cypriots lived together.

Britain occupied the island in the late 19th century. During the 1950’s, Greek nationals of the island started a guerrilla war against British rule for their idea of “Enosis”, which means union with Greece and is still taught in Greek schools. The ideology is an extension of the racist “Megali idea,” the codename for Greek expansionism, that would include some parts of western Turkey. The idea has played a major role in Greek politics in the past after the independence in 1821, some right-wing politicians even considered it as a state policy. Further to that, some nationalist movements use it to charm voters nowadays.

Cyprus gained independence in 1960 that lasted less than three lustrum when an Athens-inspired coup aimed at uniting the island with Greece prompted violence there.

Clashes occured between the Greece-backed junta and Turkish Cypriots who opposed their island’s unification with Greece. A right-wing Greek military junta “burned Turkish mosques and set fire to Turkish homes in the villages,” wrote France Soir on July 24,1974.

Turkey sent its army to protect the Turkish community in Cyprus, under Ankara’s guarantor status.

Now, more than one-third of the island is under the administration of the Turkish Republic of Northern Cyprus. The southern part is governed by a Greek Cypriot administration, which became a European Union member in 2004, under the name the Republic of Cyprus.

The island has seen the peace process stall in recent years, with the latest initiative in Switzerland under the auspices of guarantor countries Turkey, Greece, and Britain collapsing last year.

In 2014, another crisis emerged regarding Cyprus’ offshore hydrocarbon resources.

In February, Turkish warships blocked a ship from reaching an area southeast of Cyprus where Italian company Eni was planning to carry out exploratory drilling.

Ankara said it would prevent any further drilling off Cyprus without the direct involvement of Turkish Cypriots.

Turkish President Recep Tayyip Erdogan has said Turkish Cypriots have a right to its natural resources and Turkey will work with the Turkish Cypriot Republic in the search for hydrocarbons near the island nation.

Some could find the tensions between Turkey and Greece over Kardak and Cyprus in the early months of 2018 bewildering, but March came with a fresh crisis.

On March 2, two Greek soldiers crossed the Turkish border near the Meric River, which borders the two countries in the north, and were arrested by officials.

The Greek army said the two soldiers lost their way in the fog while patrolling the area around the river, demanding their immediate release.

A Turkish court in the western province of Edirne ordered the pair be charged with “attempted military espionage” and “entering forbidden military territory.”

Turkish security sources said the soldiers are facing espionage charges for sending records on their phones to their superiors.

He added that 7,000 service members were being moved to the islands and a border area in northeast Greece.

“Whenever Turkey’s relations with the United States and European Union sour, Athens’ fragile ties with Ankara fall to new lows. However, that’s not a big issue for Turkey as Greece is not a priority for its foreign policy.” Oguzlu added.

In the past, soldiers from both sides have violated their neighbours’ borders, and some have been imprisoned for months. But the escape of eight former Turkish soldiers to Greece in 2016 was unprecedented.

Hours after the coup attempt in Turkey on July 15, 2016, eight Turkish military officers stole a military helicopter and arrived in Dedeagac (Alexandroupolis) city of Greece, very close to the Turkish border.

Three majors, three captains and two sergeant majors said they feared for their lives back home and claimed political asylum, after they allegedly took part in the coup attempt, which killed more than 250 people in Turkey.

Greek authorities have not sent them back home – a move Turkey called “politically motivated.”  Moreover, the Greek Council of State – the highest administrative court in the country – ordered the release of Suleyman Ozkaynakci under judicial control. He was one of the eight Turkish soldiers who allegedly played a role in the July 15 coup attempt.

The Council of State is expected to make a final decision over the asylum requests of all the eight former Turkish officers on May 4.

They are accused by the Turkish authorities of being members of Fetullah Terrorist Organisation (FETO), the group orchestrated the defeated coup under the order of its US-based leader Fetullah Gulen. Ankara blames FETO for being behind a long-running campaign to overthrow the government through the infiltration of Turkish institutions, particularly the military, police, and judiciary.

Speaking to reporters in capital Ankara on Friday, the Turkish Premier Binali Yildirim said, “Greece is a neighbour and a friendly country to Turkey. We think that our enemy should also be seen as an enemy of Greece. We believe Greece should behave in accordance to that.” 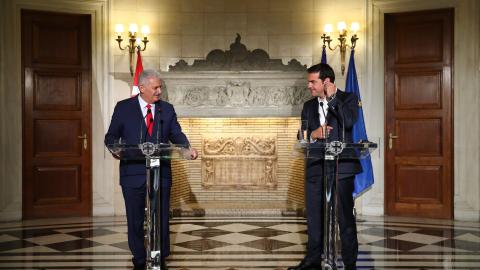 Thousands of US Forces members saying no to Covid- 19 vaccine

Turkey to deliver aid to Afghanistan via Pakistan: Çavuşoğlu

Afghan Taliban acted ‘businesslike and professional’ in new evacuation: US

$7 billion of Qatari investments to flow into Turkey