After the Syrian army gained control over the Eastern Ghouta countryside of Damascus, they decided to send reinforcements toward a new battle against the Islamic State of Iraq and the Levant (ISIL) in an area south of the capital, a monitor group reported on Sunday.

The Syrian forces are now bracing to dislodge ISIL from the Yarmouk Camp area as well as the adjacent Hajar Awad, Qadam and Tadamun areas, said the Syrian Observatory for Human Rights.

ISIL entered those areas in 2015 but their location wasn’t as significant as that of Eastern Ghouta, where the last rebel bastion of Douma district recently fell to the Syrian army. 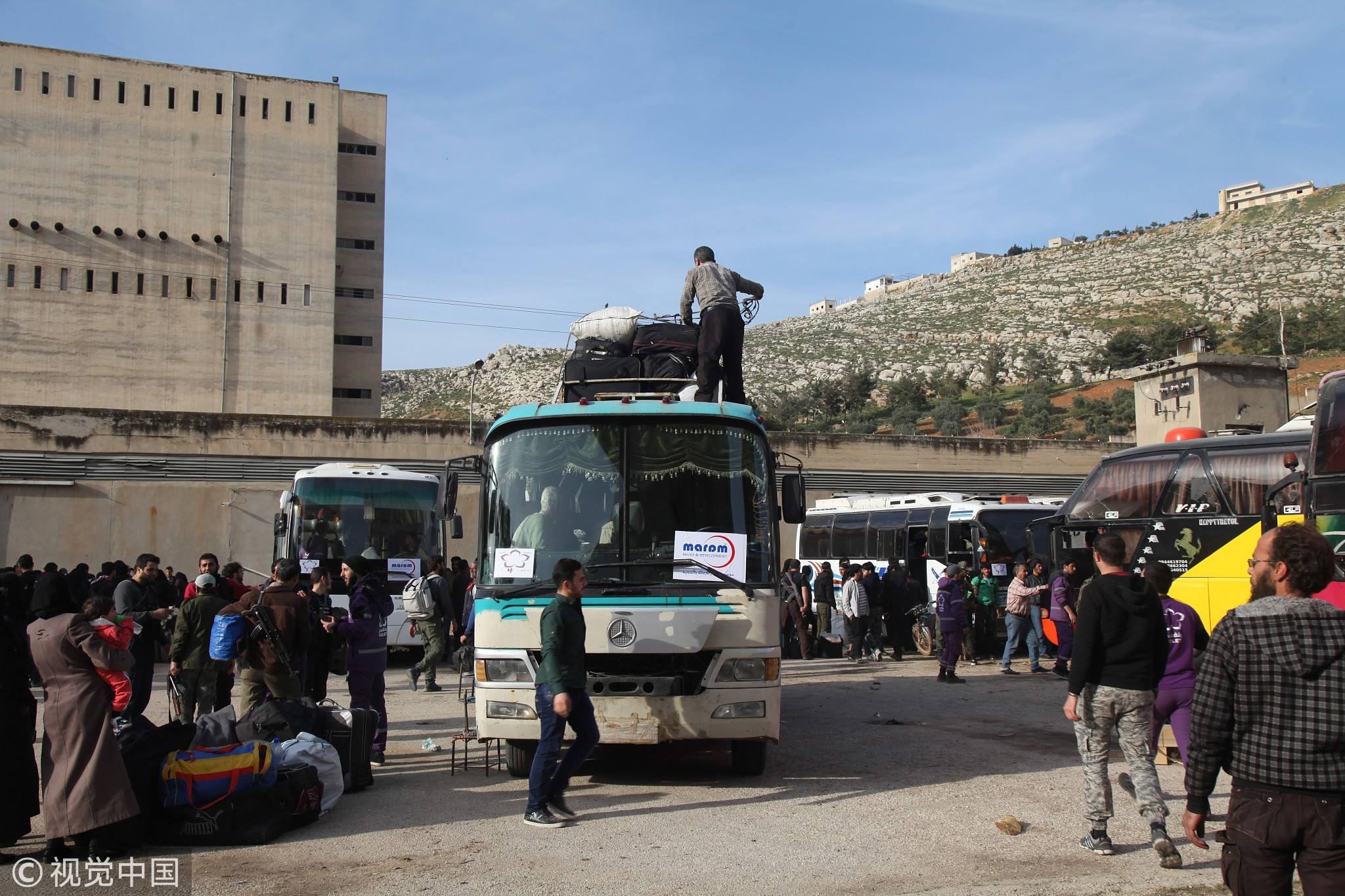 Syrian civilians, who were evacuated from government-blocked Al Qadam region of Damascus, arrive at Idlib, Syria on March 13, 2018.

The Observatory said around 21,000 people, including 7,000 rebels with the militant group Islam Army left Douma recently, clearing rebels from the entire Eastern Ghouta region and saving the capital from daily rebel mortar attacks.

Meanwhile, the state TV said Sunday that the Syrian police forces have been deployed in Douma amid ongoing preparations for the return of people to their homes.

The Russian military police also entered Douma after the evacuation of the rebels, who left toward the rebel-held city of Jarablus in northern Syria under a deal with the Syrian government and the Russians.

This operation, as well as the upcoming one in southern Damascus, aims to expand the circle of security around the capital.

On Saturday, the Syrian army declared capturing Douma, the last rebel bastion in the Eastern Ghouta countryside of Damascus, after the evacuation of rebels and their families. 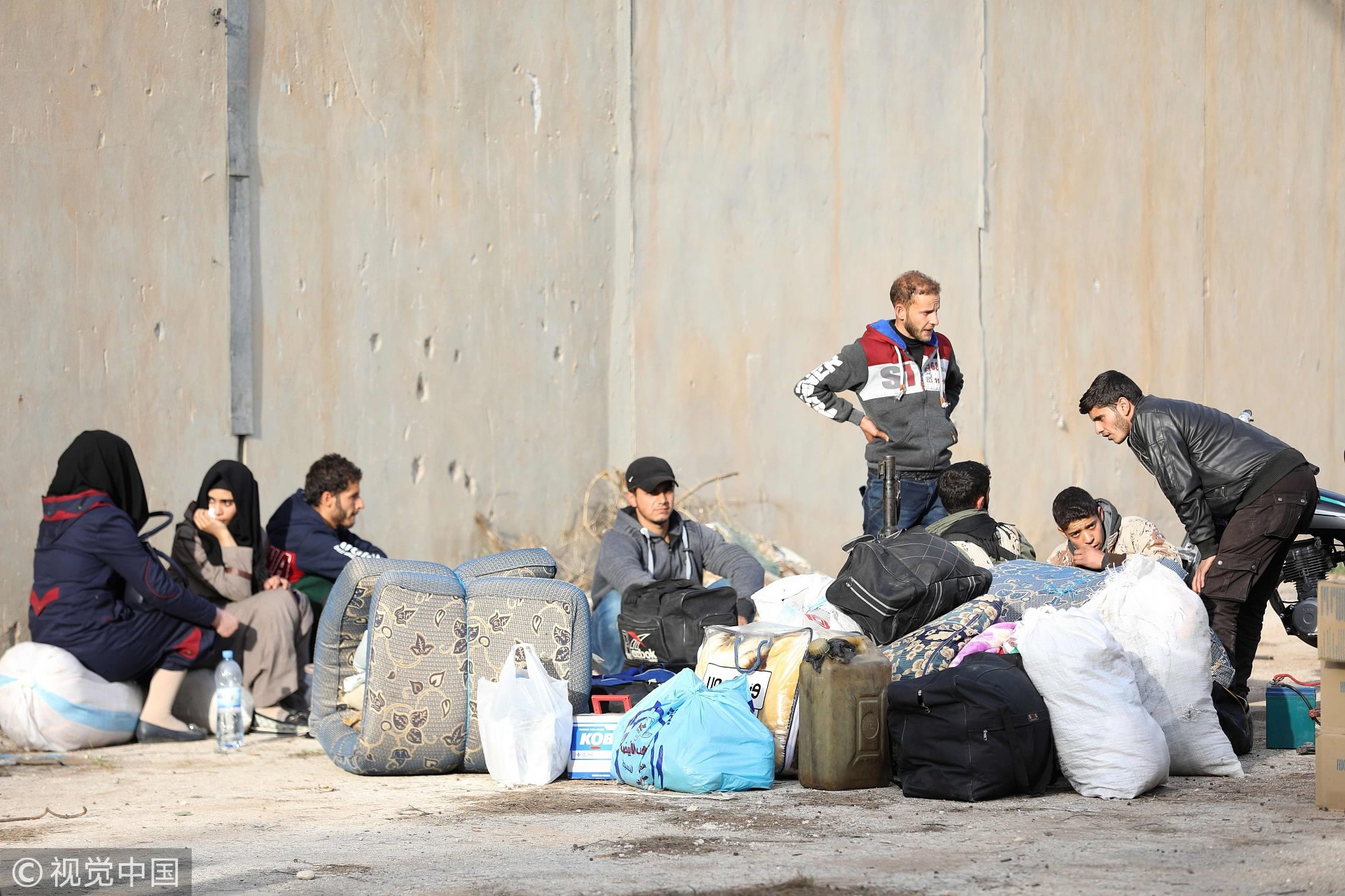 Rebel fighters and their families are seen arriving at Qalaat al-Madiq village in the province of Hama, Syira, on March 13, 2018. /VCG Photo

In its statement, the army said the bomb squad started inspecting the squares and streets to remove roadside bombs left by militants in that area in order to pave the way for other army units to secure the area.

The army said many factories for manufacturing weapons and munition were found in addition to a large number of tunnels and food storage areas the rebels had kept away from civilians.

“This major victory in Douma and the eradication of terrorism from the entire Eastern Ghouta is a natural result of the people’s embracement of the Syrian army when they took to the streets, urging the army to liberate them from terrorism,” the military statement said. 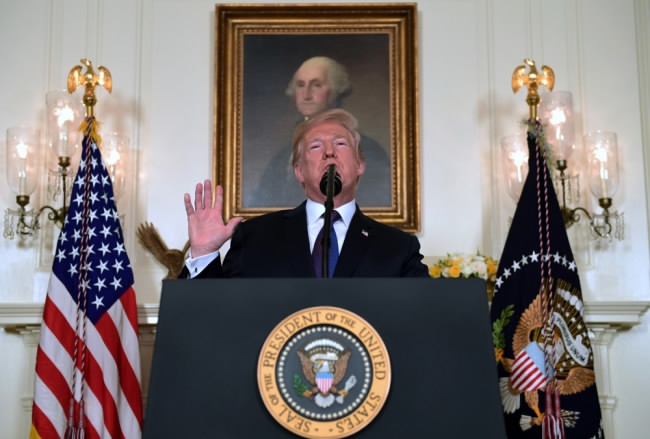 US President Donald Trump speaks in the Diplomatic Reception Room of the White House on April 13, 2018, in Washington, about the US’ military response to Syria’s alleged chemical weapon attack on April 7. /AP Photo

The army stressed its keenness about the lives of civilians as well as their security and protection.

The army said that the victory in Douma comes as the United States, Britain, and France launched their attack on the Syrian military positions earlier on Saturday.

The three Western allied nations launched their attack against the backdrop of allegations over chemical weapon use by the Syrian forces in Douma on April 7 prior to the rebels’ evacuation. 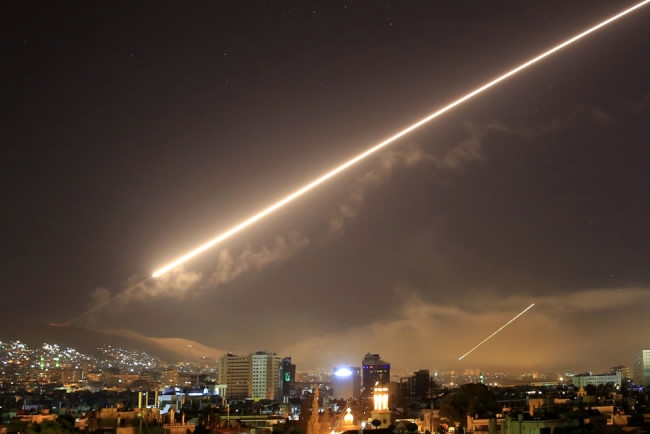 Air missiles in the Damascus sky as the US launches an attack on Syria targeting different parts of the Syrian capital Damascus, Syria, early Saturday, April 14, 2018.

The Syrian government strongly denies the allegations, calling for the Organization for the Prohibition of Chemical Weapons to send a fact-finding mission to look into the allegations.

But the US and its allies launched their offensive on Saturday without waiting for the results of the inspection.

Bashar al-Jaafari, the permanent representative of Syria in the UN, said Saturday that the fact-finding mission arrived in the capital on Saturday afternoon as the Syrian government stressed its determination to cooperate with the team.

US resolution on 1915 events worthless, biggest insult to Turkish people,...

Thousands turn out in Canada for funeral of terror attack Muslim...

Anxious WHO implores world to ‘do it all’ in long war...

Oil fields in Syria must be under the control of the...