A Hindu Dalit woman was elected as a senator in Pakistan’s weekend polls in a historic first, stirring a wave of enthusiasm on social media in the Muslim-majority country as well as neighboring India, which is home to nearly one billion Hindus.

The election of opposition candidate Krishna Kumari Kolhi is significant because she is from a marginalized community at the bottom of the hierarchy in the Hindu caste system. She was declared the winner of a reserved seat for women in Sindh province on Saturday.

Some local and international media outlets had erroneously reported the win as a first by a Hindu woman in Pakistan. The mistake was cited by a number of social media users, including Pakistani-American writer and politician Farahnaz Ispahani. 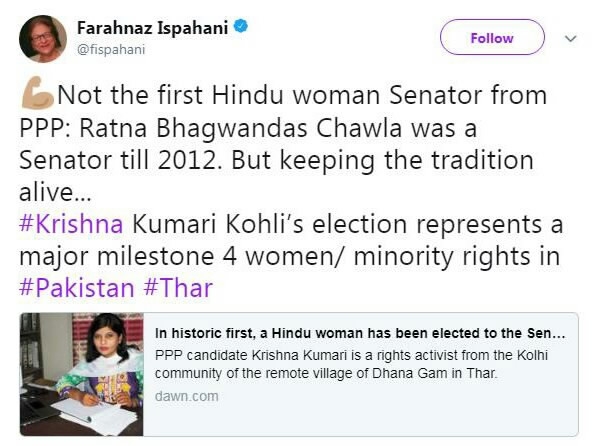 Kolhi’s Pakistan People’s Party had earlier clarified that its candidate Ratna Bhagwandas Chawla was the first Hindu woman to be elected to the Senate in 2006. Kolhi, the party said, is the first-ever Dalit woman to win a seat in the Senate.

“I feel proud, I am thankful to Pakistan People’s Party that they nominated me,” Kolhi told the media on Sunday.

Pakistan’s Hindus, who make up around two percent of the country’s 200 million people, have long faced economic and social discrimination.

Liberal Pakistanis celebrated the rare success of a woman from the marginalized community.

“Truly delighted: Krishna Kumari Kolhi of PPP for being the first ever Dalit woman to become a Senator. Well done, PPP, and more power to women from neglected communities of Pakistan on representing all of us in Senate,” tweeted journalist Mehr Tarar. 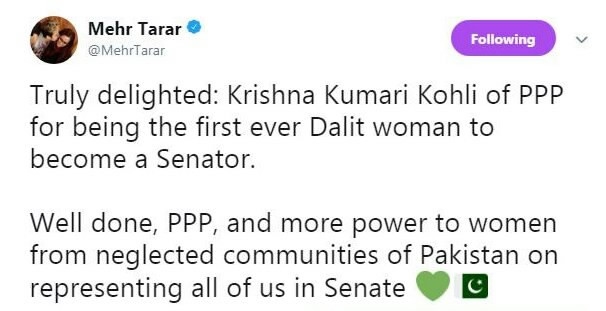 “Kudos to PPP for electing #KrishnaKolhi… Our parliament should have representatives of all religions, classes & genders in pursuit of true democracy,” tweeted rights activist Jibran Nasir.

Kolhi’s surprise victory created a stir even in neighboring India, with all the major media organizations airing the news prominently and Twitter users joining in welcoming Kolhi’s achievement.

The All India Mahila Congress, the women’s wing of the main opposition Indian National Congress party, shared the story from its official Twitter handle “#WomenPositive.” 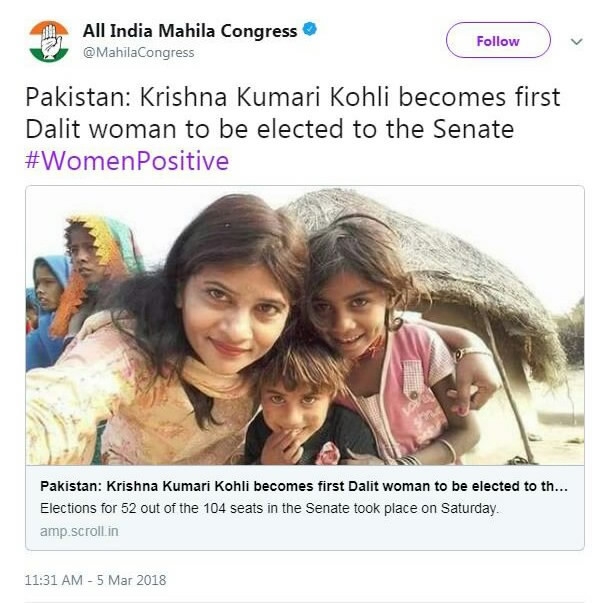 Kolhi was born in 1979 to a poor peasant family in Nagarparkar village in the Thar desert region of Sindh province.

She and her family were held captive as bonded laborers for at least three years in a jail run by a landlord when Kolhi was a child, according to a report by Press Trust of India (PTI) news agency.

Married at the age of 16, Kolhi managed to pursue a masters in sociology from Sindh University.

“My husband and family supported me a lot in my studies and work and it allowed me to get required education despite my Dalit caste background,” she told PTI.

Krishna Kolhi later joined the PPP as a social activist and actively worked for the rights of the marginalized communities of Thar.

“I am a human rights activist and try to highlight the problems faced by the minorities especially Hindus. PPP could have nominated any other woman for the seat but they showed they have regard for minorities as well,” said the newly-elected senator. 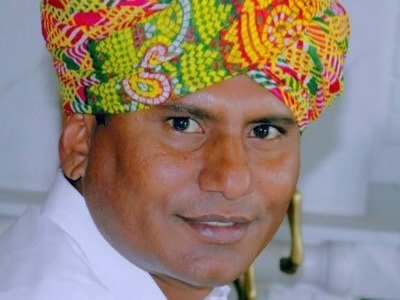 A file photo of Veerji Kolhi, the brother of Krishna Kolhi, who was released from the Hyderabad prison last Friday

Kolhi’s brother Veerji Kolhi is a human rights activist dedicated to the cause of marginalized communities in Sindh. He is also a PPP leader and the elected chairman of a Union Council from Nagarparkar. Veerji Kolhi was released after 11 months from Hyderabad prison, just a day ahead of his sister’s election to the Senate.

Members of parliament and of provincial assemblies voted on Saturday to fill half the seats in the Senate, or upper house, before elections due this summer for the lower house of parliament.

The ruling Pakistan Muslim League-Nawaz (PML-N) won 15 of the 52 seats up for election to secure a total of 33 spots in the 104-seat upper house. Support from allies is likely to give it a dominant majority.

Bank of England will act on rates if inflation risks grow,...

Lack of access to GPs is sending people to A&E, Javid...