Russian President Vladimir Putin and Israeli Prime Minister Benjamin Netanyahu agreed that Israel-Russia military coordination in regard to Syria would continue after the most serious confrontation between Israel and Iran over the war-torn country on Saturday, Netanyahu said.

In a telephone call on Saturday after Israeli air strikes on Iran-backed positions in Syria, Putin and Netanyahu discussed the situation in the country, Interfax news agency cited the Kremlin as saying.

Putin told Netanyahu there was a need to avoid any steps that would lead to a new confrontation in the region.

Russia’s Foreign Ministry urged “restraint” by all parties, adding it was “unacceptable to create threats to the lives and security of Russian soldiers” in Syria.

Commenting on the escalation of tensions, a Western diplomat in the region said: “My impression is that it seems to be contained at this point. I don’t think anybody wants to escalate further.”

On Saturday, Israel launched large-scale raids on Iranian positions in Syria, during which one of its warplanes was targeted by Syrian air defenses and crashed. The two crew from the crashed F16 were alive after ejecting, although one was severely wounded, the Israeli military said.

Israel’s raids came after it intercepted what it said was an Iranian drone entering its airspace from Syria, calling it an “attack.” 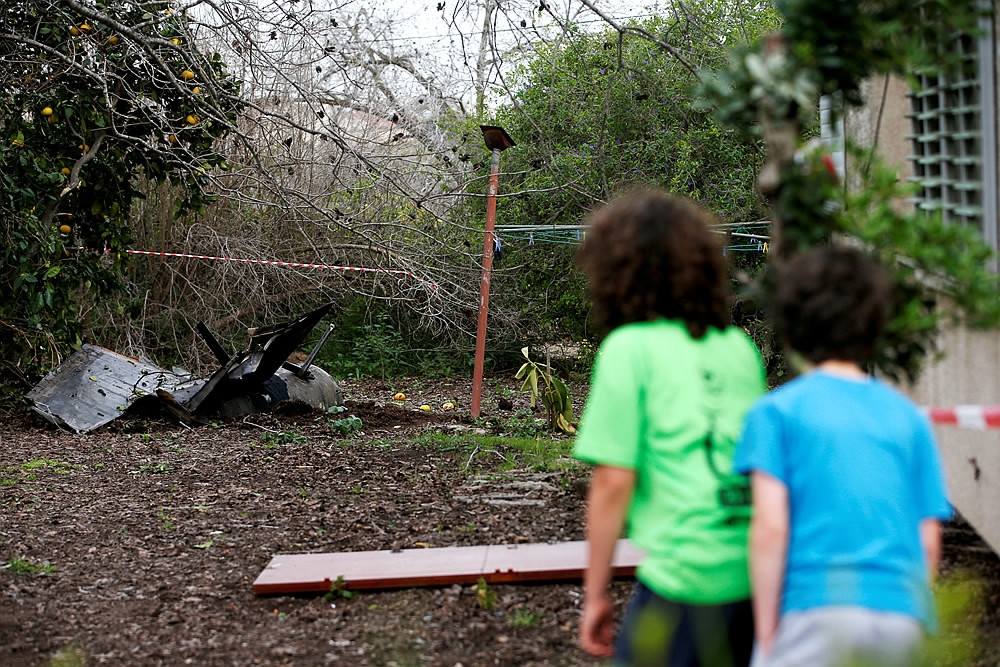 Kids look at fragments of a Syrian anti-aircraft missile found in Alonei Abba, about 3.2 km from where the remains of a crashed F-16 Israeli war plane were found, at the village of Alonei Abba, Israel, February 10, 2018. /Reuters Photo

“Twelve targets, including three aerial defense batteries and four Iranian targets that are part of Iran’s military establishment in Syria were attacked,” the Israeli military said in a statement.

Following the attacks, Netanyahu vowed to prevent Tehran from establishing a threatening military presence in the Arab state.

Iran’s President Hassan Rouhani said countries are mistaken if they think bombing their neighbors achieves anything.

“If one country thinks that through boosting terrorism, or meddling in the affairs of other countries, or bombardments of neighboring countries can gain desirable results – it is making a mistake,” Rouhani said at a press conference with foreign ambassadors, noting that the Iranians are prepared “more than before” to maintain security in the region.

Washington backed Israel and blamed Iran for the escalation.

(With inputs from Reuters, AFP)

killed, around 50 injured as mortars hit Afghan city on Independence...

Russian Orthodox Church breaks with Constantinople in row over Ukraine