Speaking at the Chatham House think tank in London, President Recep Tayyip Erdogan says the US had “lost its role as mediator in the Middle East peace process.”

The US administration has lost its role as a mediator in the Middle East with its decision to recognise Jerusalem as the capital of Israel, Turkish President Recep Tayyip Erdogan said on Monday.

Erdogan’s comments came in his address at the Chatham House, a London-based think tank, ahead of the official opening of United States embassy in Jerusalem.

“We once again reject this decision, which is violating international law and conflicting with the UN decisions,” Erdogan said.

Monday also coincides with the 70th anniversary of Israel’s establishment in 1948, an event Palestinians refer to as the “Nakba” or the “The Catastrophe”.

“We cannot stop feeling like being in dark days of pre-World War II,” Erdogan said on the embassy move.

US President Donald Trump sparked international outcry last December when he unilaterally recognised Jerusalem as Israel’s capital and vowed to relocate Washington’s embassy to the city.

He also spoke about several regional and international conflicts.

“The international community must act fast to end Israel’s rising aggression by fulfilling its responsibilities.

“If Shakespeare was alive and to rewrite his Hamlet today, I believe he would make Prince Hamlet say the same thing: ‘The time is out of joint’,” Erdogan said, quoting the famous English bard.

“It is not possible to say anything else after seeing more than 50 people who were killed by snipers after specifically being targeted in Palestine, just in the last few weeks, and about 1,000 wounded people, who wanted nothing else but to go back their homes,” he said.

“Ask a father who works for under $1 per day and tries to look after his family! Can he say anything else?

“Words fail to describe the miserable conditions for millions of people in Somalia, Yemen and Afghanistan.”

He added that the international community has been unable to reach a consensus in the fight against terrorism due to the stance “your terrorist is bad, my terrorist is good”.

Erdogan underlined that Turkey had efficiently neutralised more than 3,000 Daesh militants in Operation Euphrates Shield held from 2016-17 in Syria.

On Turkey’s fight against the YPG/PKK, Erdogan said: “We have cleared and are still clearing Afrin region of those terrorists.”

Turkey launched Operation Olive Branch on Jan. 20 to clear YPG/PKK and Daesh from Afrin, northwestern Syria, amid growing threats from the region.

On March 18, Turkish-backed troops cleared the Afrin town centre, which had been a major hideout for the YPG/PKK militants since 2012. 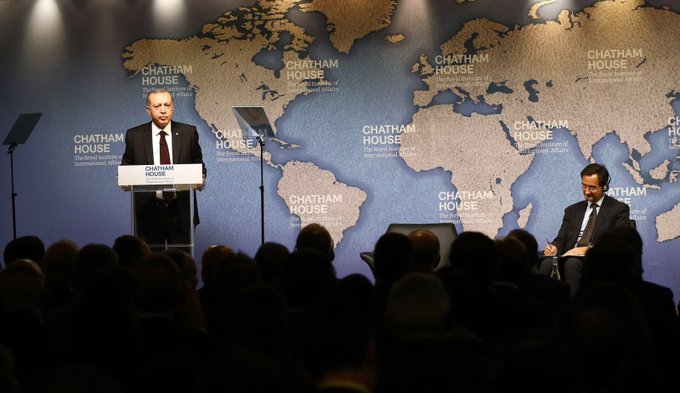 AS PRESIDENT @RT_ERDOGAN UNDERLINED AT HIS SPEECH AT @CHATHAMHOUSE, #TURKEY WILL CONTINUE TO STAND AGAINST ALL GLOBAL INJUSTICES, INCLUDING THREATS TO THE STATUS OF #ALQUDS AND THE INALIENABLE RIGHTS OF #PALESTINIAN PEOPLE.#WORLDISBIGGERTHANFIVE #NAKBA70

He said the only way to ensure the repatriation of more than 3.5 million Syrian refugees, currently living in Turkey, is to make Syria safe again.

Pointing out that Turkey had spent $31 billion on refugees, so far, without any significant support from any other country and especially from the EU, Erdogan said refugees do not return to areas controlled by terror organisations backed by allies.

He said the PKK/YPG is camouflaging itself with Kurdism or Kurds to con the world and they control the region called Ayn al Arab or Kobani.

Erdogan said Turkey will continue to fight against terrorist organisations in a principled way.

The eastern Mediterranean region will face a sustained security threat if the Greek Cypriot side continues unilateral hydrocarbon-related operations there, said Erdogan on Monday.

Turkey and Greek Cypriot administration have been locked in a public dispute over overlapping claims of jurisdiction for offshore oil and gas research.

Cyprus has been divided since 1974 when a Greek Cypriot coup was followed by violence against the island’s Turks, and Ankara’s intervention as a guarantor power.

Only Turkey recognises the breakaway Turkish Republic of Northern Cyprus, which declared independence in 1983 following years of failed peace talks with the Greek Cypriots.

Taliban accuses US of ‘bombarding civilians’ despite Afghan peace deal

The “Lab-leak” inquiry at the State Department: An Open Letter by Christopher...