The renovation work of the House of Peace, the 30-year-old venue where the summit is set to happen has also come to an end, Seoul said. Inter-Korean dialogues, including high-level and military talks have been held at the venue, but never a meeting between top leaders, the presidential office said earlier.

The summit, which is scheduled for Friday, is seen as an important step in resolving Korean Peninsula issues. The ROK Foreign Minister Kang Kyung-wha said it will likely to be a chance to confirm DPRK’s commitment to denuclearization between the top leaders of the two countries.

This will be the third inter-Korean summit and the first time for it to be held on ROK’s territory. The two previous summits were held in Pyongyang in 2000 and 2007 respectively. 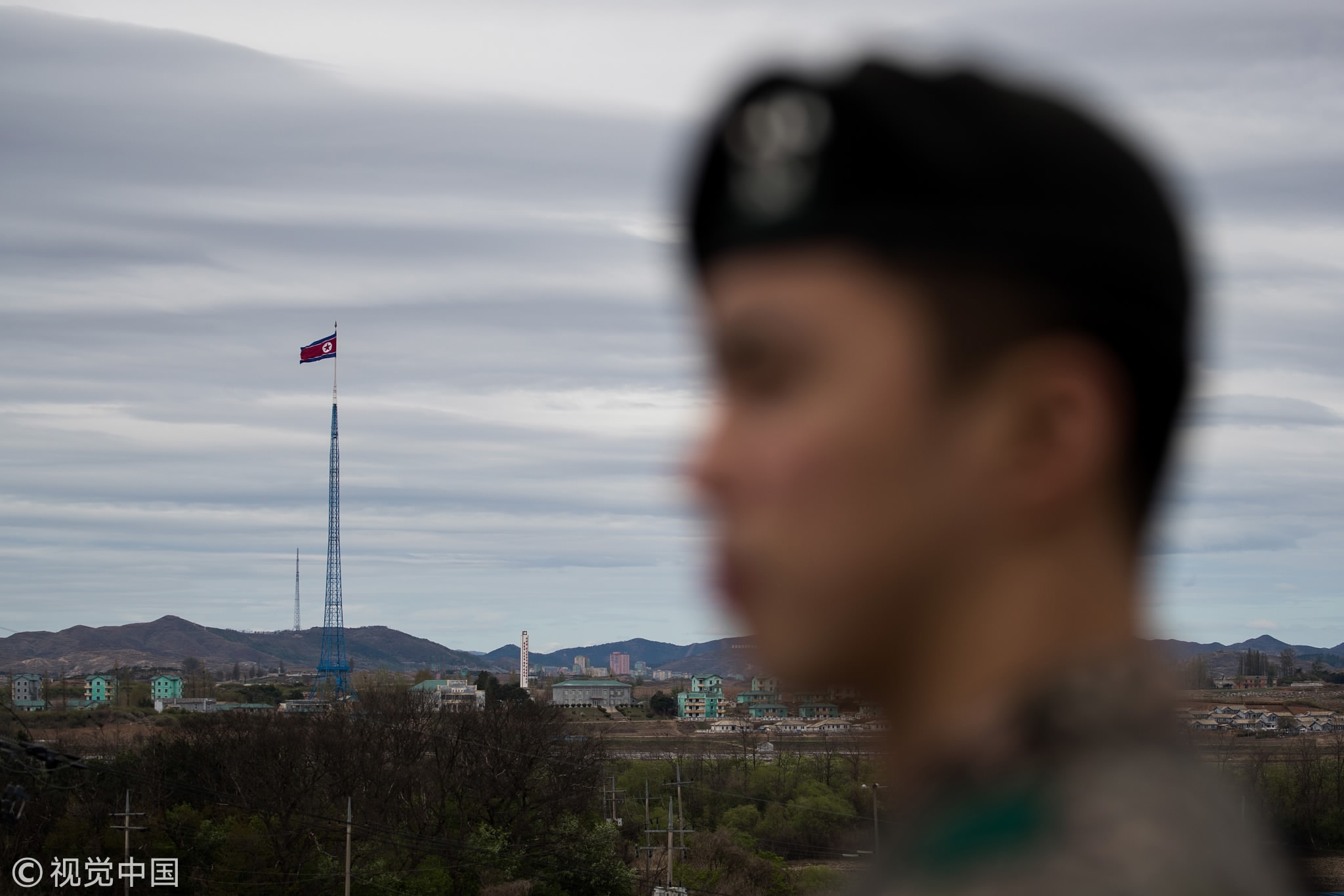 A DPRK flag flies over DPRK’s Gijungdong village as a ROK soldier stands guard at the Daeseong-dong village in the Demilitarized Zone (DMZ) in Paju, ROK, April 24, 2018./VCG Photo

In addition to construction works to bring the old venue up to date, the venue has been completely refurnished to accommodate the two leaders, according to Cheong Wa Dae.

A new oval-shaped table, measured exactly 2,018 millimeters across, has been placed at the center of the main conference room for the two leaders to hold talks. The measurement highlights the historic 2018 inter-Korean summit, according to Cheong Wa Dae.

Besides that, new art work featuring DPRK’s Mount Kumgang can be seen on the walls of the conference room.

Dishes include fish from ROK’s Shinan, hometown of the late ROK President Kim Dae-jung who held the first inter-Korean summit with Kim Jong Un’s late father, Kim Jong ll, and a famous cold noodle dish from Pyongyang’s Okryukwan restaurant will also be served to the leaders.

The North and the South staged a joint rehearsal of the summit on Wednesday, one day after Seoul held one on its own. A final and more complete walk-through will be held on Thursday, Cheong Wa Dae said.

EU struggles to agree on Gibraltar before Brexit summit

British PM Johnson to return to work on Monday as virus...

UK Household bills jump by at least £139 under new energy...