Pope Francis in his Easter address appeals for ending conflict in “long-suffering land of Syria” and the Holy Land two days after at least 16 Palestinians were killed by the Israeli troops.

On Christianity’s most joyful day, Pope Francis has called for peace in a world marked by war and conflict, “beginning with the beloved and long-suffering land of Syria” and extending to the Gaza violence as at least 16 Palestinians were killed on the Gaza-Israel border two days before Easter Sunday.

The Pope made his appeal in his “Urbi et Orbi” (to the city and the world) message from the central balcony of St Peter’s Basilica to tens of thousands of people in the flower-bedecked square below where he earlier celebrated a Mass.

“Today we implore fruits of peace upon the entire world, beginning with the beloved and long-suffering land of Syria,” the pontiff said.

Appealing to the “consciences of all political and military leaders,” Francis urged “that a swift end may be brought to the carnage” in Syria as 80,000 pilgrims listened in St Peter’s Square and millions watched the speech broadcast live around the world.

Calls for peace in Holy Land

The head of the world’s 1.2 billion Catholics asked that “provisions be made to facilitate access to the aid so urgently needed by our brothers and sisters, while also ensuring fitting conditions for the return of the displaced” to Syria.

As he spoke, a final deal was reportedly reached for militants and civilians to leave the last opposition-held pocket of eastern Ghouta.

He also called for peace in the Holy Land two days after at least 16 Palestinians were killed by Israeli forces on the Gaza-Israel border, saying the conflict there “does not spare the defenceless”

The 81-year-old Francis said the Holy Land was “also experiencing… the wounds of ongoing conflict that do not spare the defenceless”, singling out the conflict in Yemen where some 10,000 people have died since March 2015.

Francis then prayed for the “fruits of dialogue for the Korean peninsula” and that the “discussions under way may advance peace and harmony within the region”. 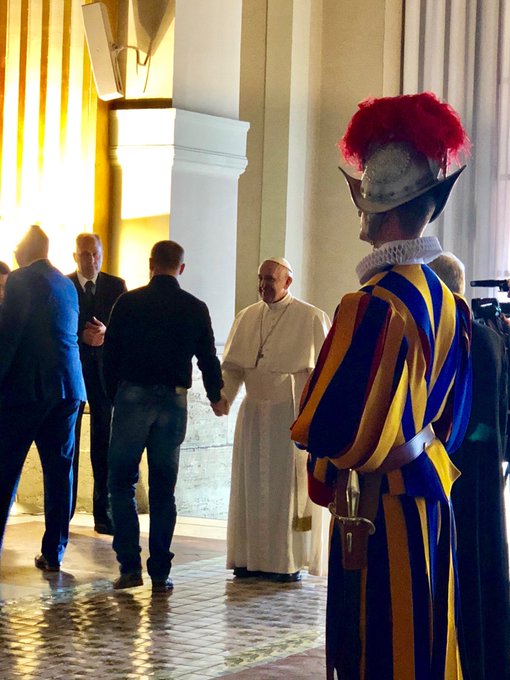 HAPPENING NOW: POPE FRANCIS AFTER THE #URBIETORBI GREETS DELEGATION FROM THE NETHHERLANDS TO THANK THEM FOR THE EASTER FLOWERS ADORNING ST. PETER’S SQUARE

“May those who are directly responsible act with wisdom and discernment to promote the good of the Korean people and to build relationships of trust within the international community,” the Argentine pope said.

February’s Winter Olympics triggered a fast-moving rapprochement that will see the North’s Kim Jong-un sit down with the South’s President Moon Jae-in in late April, with a US summit with President Donald Trump planned for May.

Earlier on Sunday, the pontiff celebrated Easter mass in the flower-bedecked square, which was under tight security.

Tourists and clergy alike formed long queues to have their belongings checked and pass through metal detectors to access the mass on the holiest day in the Christian calendar, marking Jesus’s resurrection.

“For those who believe in the radical form of holy war, Rome represents so many things put together – there’s the pope, the Vatican…”

Italian authorities are concerned that some of the estimated 120 radicalised Italians who left for Syria or Iraq to fight with militant groups could be returning to the country posing as migrants.

Last week saw a wave of anti-terror arrests, with Interior Minister Marco Minniti warning of a high risk of an attack.

Is the EU’s cutting of funds to Turkey sending a political...

Prime Minister May warns rebel Conservative MPs there could be ‘no...