Poland’s right-wing government says the law is needed to protect the reputation of its citizens and make sure they are recognised as victims not perpetrators of Nazi aggression during World War Two.

Poland’s President Andrzej Duda on Tuesday signed into law a controversial Holocaust bill to outlaw blaming Poland as a nation for crimes committed by Nazi Germany during the Holocaust, intending to safeguard his country’s image abroad but which has instead sparked tensions with Israel, the US and Ukraine.

Duda said he would send the law, which will come into force, to the Constitutional Tribunal to rule on whether it conforms with constitutional guarantees on freedom of speech.

The legislation sets fines or a maximum three-year jail term for anyone describing Nazi German death camps like Auschwitz-Birkenau as being Polish, simply due to their location in Poland.

It would also make it a crime to accuse the Polish state of complicity in the Holocaust.

“I have decided to sign the law but also to send it to the Constitutional Tribunal,” Duda told reporters in Warsaw.

He said that his decision “preserves the interests of Poland, our dignity and the historical truth” and also “takes into account the sensitivity of those for whom the question of historical memory of the Holocaust remains exceptionally important, especially those who have survived and who, as long as they can, should tell the world about this past and their experience”.

Poland’s right-wing government says the law is needed to protect the reputation of its citizens and make sure they are recognised as victims not perpetrators of Nazi aggression during World War Two.

Defending the law, Duda said the law will not block Holocaust survivors and witnesses from talking about crimes committed by individual Poles.

“We do not deny that there were cases of huge wickedness,” he said in a speech.

But he said the point of the law is to prevent Poles and Poland from being wrongly accused of institutionalised participation in the Holocaust.

“No, there was no systemic way in which Poles took part in it,” he said.

ISRAEL CONTINUES TO COMMUNICATE WITH POLISH AUTHORITIES AND HAS EXPRESSED ITS RESERVATIONS REGARDING THE NEW POLISH LAW.

ISRAEL HAS NOTED, THAT THE POLISH PRESIDENT HAD DEFERRED THE LAW TO THE CONSTITUTIONAL COURT FOR CLARIFICATIONS AND AMENDMENTS. PIC.TWITTER.COM/QGR6I39LTA

WE HOPE THAT WITHIN ALLOTTED TIME UNTIL THE COURT’S DELIBERATIONS ARE CONCLUDED, WE WILL MANAGE TO AGREE ON CHANGES AND CORRECTIONS.

ISRAEL AND #POLAND HOLD A JOINT RESPONSIBILITY TO RESEARCH AND PRESERVE THE HISTORY OF THE HOLOCAUST.

The law has fuelled a diplomatic crisis with Israel, which fears it will stifle discussion about the Holocaust and enable Poland to whitewash the role of Poles who killed or denounced Jews during the German occupation of Poland during World War II.

Israel’s foreign ministry said in a statement that it noted that fact and hoped “clarifications and amendments” would be forthcoming.

“We hope that within the allotted time until the court’s deliberations are concluded, we will manage to agree on changes and corrections,” it said.

“Israel continues to communicate with the Polish authorities and has expressed its reservations regarding the new Polish law.”

Prime Minister Benjamin Netanyahu declared last week that “we have no tolerance for the distortion of the truth and rewriting history or denying the Holocaust”.

His education minister, Naftali Bennett, said on Monday that Polish authorities had cancelled his forthcoming visit to Warsaw over the diplomatic spat.

“The government of Poland cancelled my visit because I mentioned the crimes of its people. I am honoured,” he wrote in a statement.

“I accepted an invitation to a dialogue based on truth,” said Bennett, head of the far-right Jewish Home party. “The Polish government chose to avoid this truth.”

WATCH: PRIME MINISTER BENJAMIN NETANYAHU’S REMARKS AT THE DEDICATION CEREMONY OF THE COMMEMORATIVE MEMORIAL FOR DIPLOMATS, RECOGNIZED AS “RIGHTEOUS AMONG THE NATIONS”, AT @ISRAELMFA. THE MEMORIAL HONORS 36 DIPLOMATS, FROM 21 COUNTRIES.HTTP://WWW.PMO.GOV.IL/ENGLISH/MEDIACENTER/EVENTS/PAGES/EVENT_HOLOCAUST050218.ASPX … PIC.TWITTER.COM/FGFIQQPA8M

Poland’s Foreign Minister Jacek Czaputowicz insisted on Monday that Netanyahu’s criticism of the Polish legislation were “due to a misunderstanding”.

“I think it’s a problem of interpretation, of over-interpretation on the Israeli side,” Czaputowicz said, adding that Poland was open to backing a joint declaration with Israel clarifying the scope of the legislation or to amending it in the future.

“It isn’t the case that we are not open to the postulates of Israel, the United States and other countries,” he said.

Prime Minister Mateusz Morawiecki has described the tensions as a “temporary weakening of relations with Israel and the USA” but added that he hoped for an improvement soon after Poland “will explain our position”.

The United States also strongly opposes the legislation, saying it could hurt Poland’s strategic relations with Israel and the US. The US has also expressed concerns that the law could hurt freedom of expression and academic research.

A leading figure in the Jewish American community has criticised Poland’s handling of its new Holocaust law.

Malcolm Hoenlein, the executive vice chairman of the Conference of Presidents of Major American Jewish Organizations, said Poland has made an “issue” out of its people’s actions during the Holocaust and is denying the truth.

He said that while Poles who helped save Jews during the Holocaust should be recognised, Poland should also acknowledge that many Poles were complicit in aiding the Nazis.

“It is not credible to engage in the denial,” Hoenlein said Tuesday. He says it would be better if Poland said “there was evil done. We recognise it.”

German Foreign Minister Sigmar Gabriel said this weekend that “there is not the slightest doubt about who is responsible for the extermination camps, who made them work to kill millions of European Jews: namely the Germans”.

“It was our country that organised these mass murders and no one else. The existence of certain collaborators does not change anything,” Gabriel said.

“Poland can be certain that any distortion of history such as the notion of ‘Polish concentration camps’ will be clearly rejected and firmly condemned,” he added.

Ukraine has also protested against the law with President Petro Poroshenko protesting against “absolutely biased and categorically unacceptable” articles that allow for the prosecution of anyone denying the crimes of Ukrainian nationalists committed between 1925 and 1950.

The legislation has not only sparked a bitter dispute with Israel — it has also caused division within Poland, which has seen a marked increase of anti-Semitic rhetoric in public debate in recent weeks. 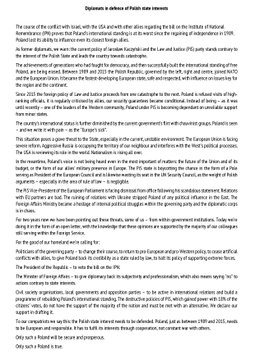 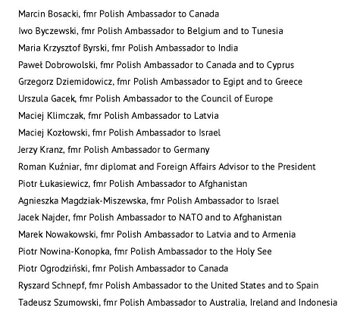 PROMINENT POLISH DIPLOMATS HAVE ISSUED A PUBLIC LETTER. “WE, FORMER DIPLOMATS, WARN: CURRENT POLICIES LEAD OUR NATION TOWARDS CATASTROPHE. POLAND LOST ITS ABILITY TO INFLUENCE EVEN THE CLOSEST ALLIES. WE SAY TO POLES: POLISH NATIONAL INTEREST HAS TO BE DEFENDED.” #LISTAMBASADORÓW

On the weekend Beata Mazurek, the spokeswoman for Law and Justice and a deputy speaker of parliament, quoted a Catholic priest on Twitter who had said that the Israeli ambassador’s criticism of the law has “make it hard for me to look at Jews with sympathy and kindness.”

Ryszard Czarnecki, Vice President of the European Parliament, weighed in by saying on state TV that “the circles of American Jews have often been even more aggressive than the Jewish circles in Israel.”

On Monday evening a small group of far-right advocates demonstrated in front of the presidential palace demanding that Duda sign the law. They carried a banner that said, “Take off your yarmulke. Sign the bill.”

More than three million of Poland’s 3.2 million Jews were murdered by the Nazis, accounting for about half of the Jews killed in the Holocaust. Jews from across the continent were sent to be killed at death camps built and operated by Germans in Poland, including Auschwitz, Treblinka, Belzec and Sobibor.

According to figures from the US Holocaust Memorial Museum, the Nazis also killed at least 1.9 million non-Jewish Polish civilians.

At long last, Americans decide between Clinton and Trump

Curfews imposed in about 40 U.S. cities as protests against police...