Palestinians in the Gaza Strip are marching on Friday to the sensitive border with Israel to protest the decades-long Israeli occupation, amid concerns that violence might break out between demonstrators and Israeli soldiers.

The protest, dubbed “The Great Return March”, will see for the first time participants camping out in an area only a stone’s throw away from Israel’s border fence, where Israel has already deployed 100 snipers. The land is designated by Israeli authorities as off-limits for Palestinians, and has been the scene of bloody clashes between angry demonstrators and Israel’s armed forces.

In a sign of heightened tensions along the frontier, one Palestinian was killed and another injured overnight by Israeli artillery fire in the southern town of Khan Younis. Observers fear this could be a prelude for what could unravel in the next few weeks.

The mass protest is being held to mark the 42nd anniversary of “Yom Al-ard” (Land Day), which commemorates violent demonstrations in 1976 in the wake of land confiscation by Israel that belonged to Palestinian citizens living there. Six Arabs were killed and over 100 others were injured at the time.

Nabil Diab, one of the members of the organizing committee, told Kuwait News Agency (KUNA) that the march aims to reaffirm Palestinian refugees’ right to and ownership of lands in modern-day Israel, and demand the full implementation of the United Nations General Assembly Resolution 194 passed in December 1948. 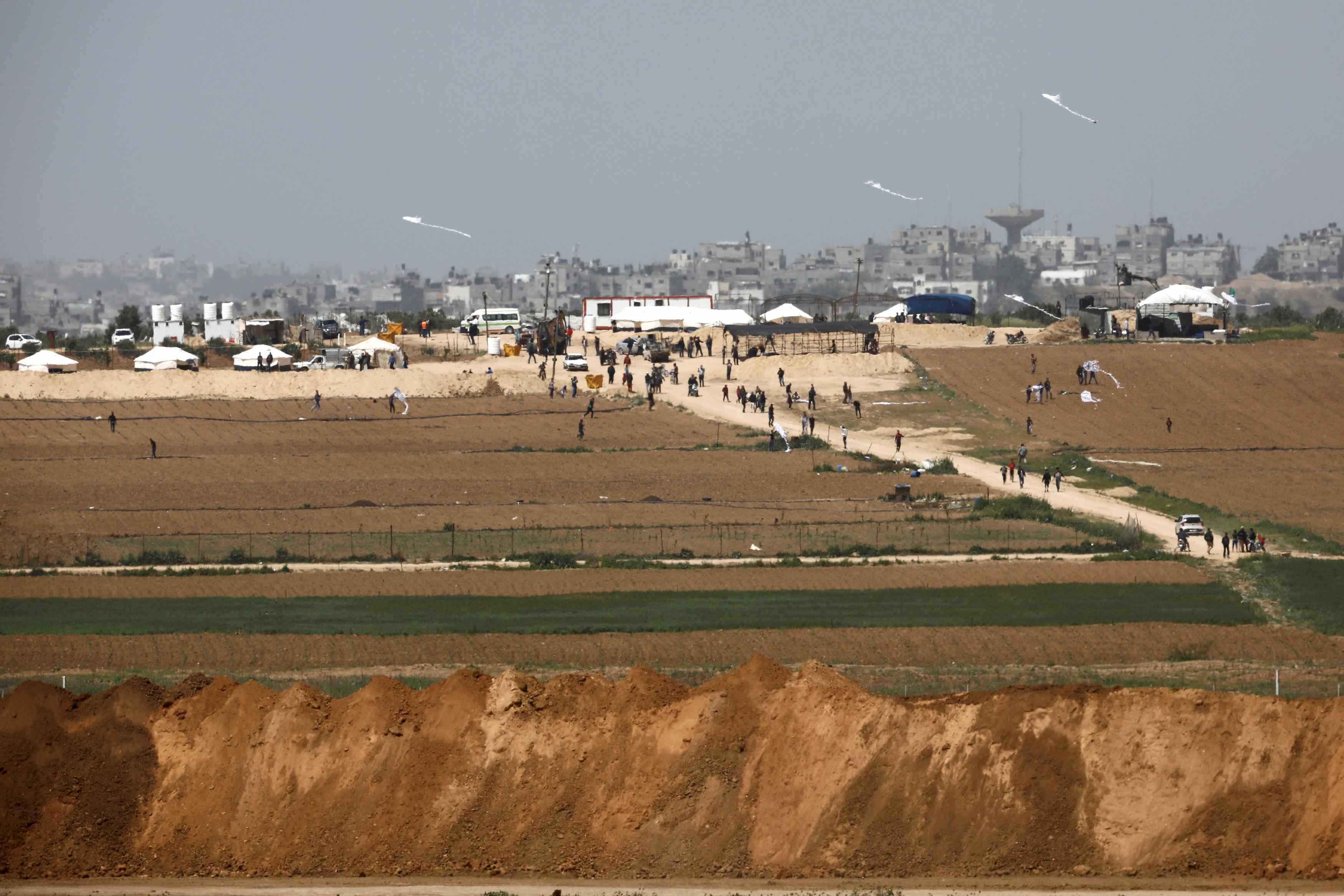 Palestinians walk near a tent camp on the Gaza side of the Israel-Gaza Strip border, as seen from the Israeli side of the border, March 29, 2018. /Reuters Photo

The resolution enshrined Palestinians’ right of return, stating that “the refugees wishing to return to their homes and live at peace with their neighbors should be permitted to do so at the earliest practicable date.”

Palestinians want about five million of their compatriots be allowed to go back to the lands Israel had expropriated, but Israel has long resisted the calls, worrying that allowing them back in would affect its Jewish character.

The protest has received the backing of rival political factions Fatah and Hamas, with calls launched for public mobilization and similar marches in Gaza, the West Bank and Jerusalem.

Hamas spokesman Abdul-Latif Al-Qanou issued a statement on Thursday saying that the march “will embody the national and territorial unity of the Palestinian people who reject the siege imposed on the Gaza Strip and the attempts to get rid of the right of the return.”

Meanwhile Atef Abu Saif, a spokesman for Fateh in Gaza, said, “The march confirms the Palestinian people’s insistence to adhere to their right to return to the land from which they were ejected, which they will never waive.”

Ahead of the sit-in, tents have been erected to accommodate protesters in five locations along the border, according to a “tight security plan that does not allow any room for occupation forces to attack [protesters] or endanger their lives,” Diab told KUNA. 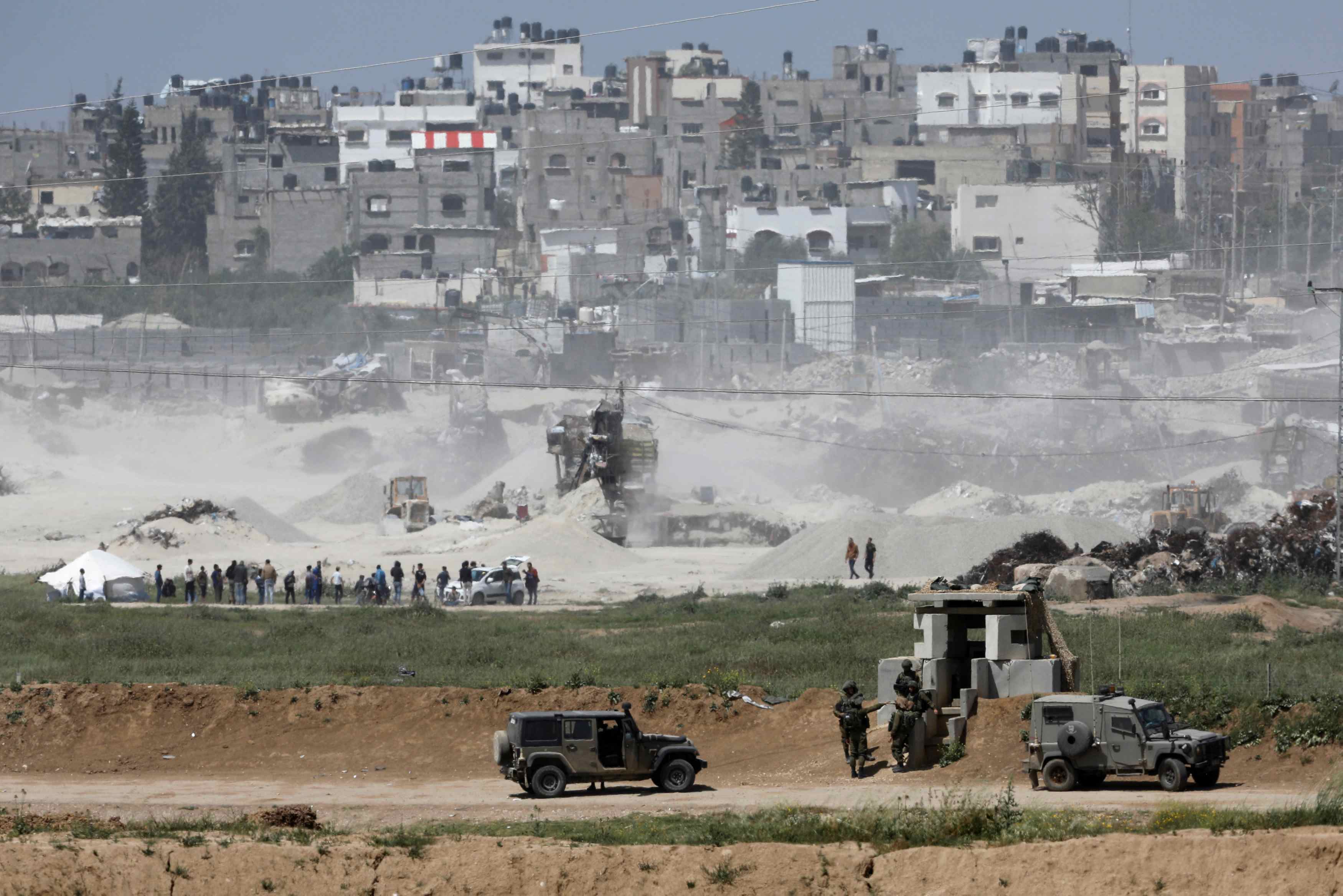 Israeli soldiers and military vehicles can be seen on the Israeli side of the border with the northern Gaza Strip, March 29, 2018. /Reuters Photo

The protest is expected to last for 46 days until May 15, when Palestinians observe the “Nakba” (Catastrophe) that refers to the expulsion of Palestinians when Israel came into existence in 1948.

Organizers of the march insist that the demonstration will be peaceful and have taken precautions to ensure the safety of demonstrators. Tents were pitched some 700 meters from the security fence, and shielded with earth mounds.

However, tensions have been running high along the border, amid fears that the march could escalate to violence.

The Israeli army has beefed up its military presence in the area, and deployed 100 sharpshooters.

Lieutenant-General Gadi Eizenkot, the military’s chief of staff warned earlier this week that they would not allow “mass infiltration” or tolerate damage to the barrier during the protests.

“If lives are in jeopardy, there is permission to open fire,” Eizenkot said. 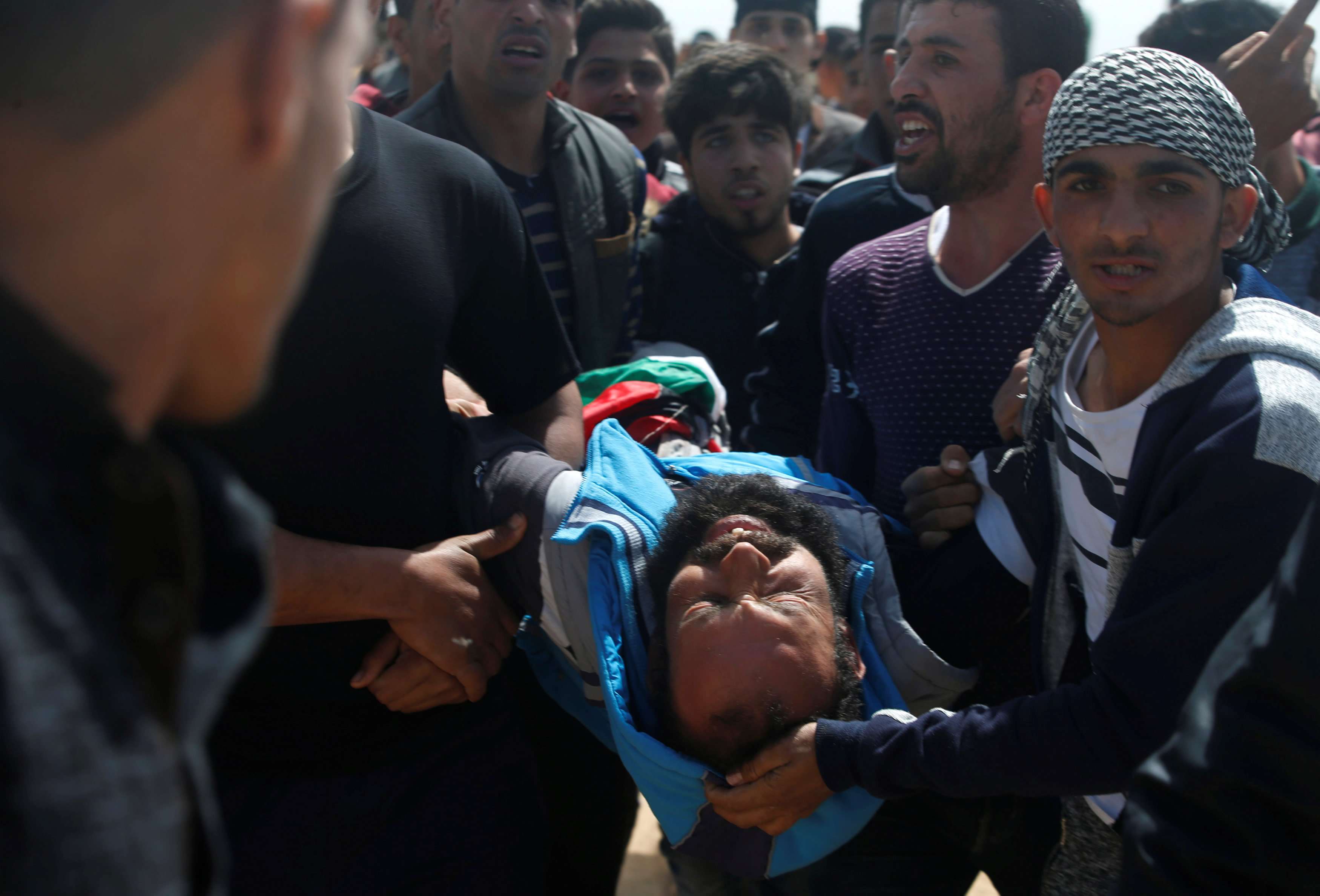 A wounded Palestinian is evacuated along Israel border with Gaza ahead of a protest in a tent city demanding to return to their homeland, March 29, 2018. /Reuters Photo

Overnight on Thursday, Israeli tanks fired at two Palestinians whom it said were conducting “suspicious” activities along the frontier, the Jerusalem Post reported on Friday morning citing a spokesperson for the Israeli army. However, the Gaza health ministry said the two, one of whom was killed and the other injured, were farmers gathering produce.

Israeli shells also struck two other Palestinians at a different location as they attempted to “interfere with security infrastructure,” according to the Israeli newspaper.

Earlier, the UN special coordinator for the Middle East peace process, Nickolay Mladenov, called on all sides “to exercise restraint and take the necessary steps to avoid a violent escalation.”

Compounding concerns that things could slip into chaos is the Palestinian anger against the US, after President Donald Trump recognized Jerusalem as the capital of Israel. The controversial decision last year triggered outcry and mass protests that ended with bloodshed, after Israeli soldiers opened fire at unarmed Palestinian civilians.

Read more: Jerusalem explained: How the status of the city has changed 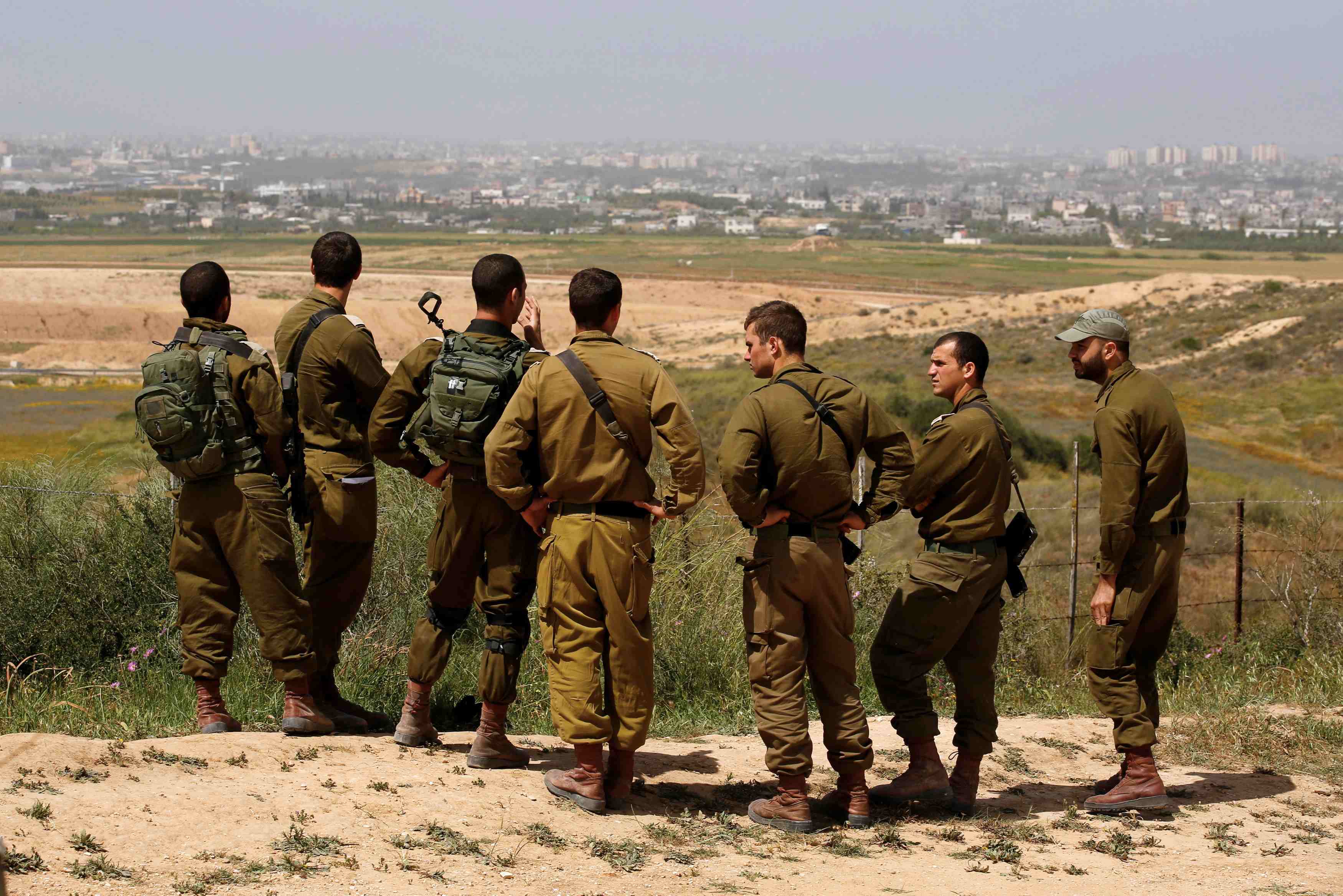 Israeli soldiers listen to a briefing on the Israeli side of the border with the northern Gaza Strip, March 29, 2018. /Reuters Photo

“Palestinian people from all walks of life reject the policy of the US administration headed by Donald Trump, and will not accept any partial and incomplete solutions. The only solution [the Palestinian people] would accept is the establishment of a Palestinian state with national sovereignty,” Diab said.

“The situation is very volatile. The Palestinians will encourage protests and will call attention to their cause. And the possibilities for tragedy and bloodshed are numerous,” Richard LeBaron, who served as deputy chief of mission at the US Embassy in Tel Aviv from September 2001 to July 2004, told US magazine Newsweek.

A ribbon-cutting ceremony to inaugurate the US Embassy in Jerusalem will be held on May 14, according to Israeli media reports, coinciding with Israel’s 70th anniversary and just one day before the “Nakba,” when the city-tent protest is expected to end.

The significance of the embassy’s opening day is likely to anger Palestinians and stoke tensions along the border between Gaza and Israel.

Turkey spars with US military over Syrian Kurds