Hundreds of Palestinians in the Gaza Strip on Tuesday gathered at Gaza’s sole seaport to say goodbye to their children who decided to take the risk aboard the anti-blockade boats, or “Hope” flotilla as Palestinians called them, searching for treatment, work and hope outside the blockaded enclave. 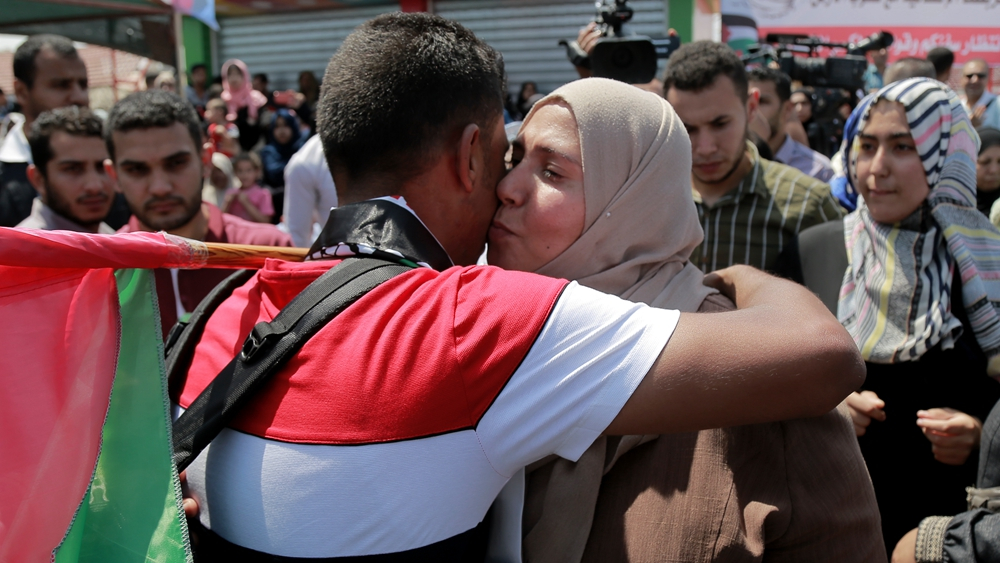 The mother of one of the alumni involved in the siege-breaking ships, during her son’s farewell before boarding the ships in the port of Gaza City, May 29, 2018. /CGTN Photo

The High Committee of the Great Return March launched Gaza’s first-ever sea trip from the Gaza port abroad, in a bid to break the more than decade-long Israeli blockade on the coastal territory. Two boats carrying a group of 20 people, including students with places in universities abroad, patients and Palestinians injured during the recent Great March of Return protests, set out from Gaza seaport on Tuesday with the intention of reaching the port of Limassol in Cyprus.

Committee member Khaled Al-Batsh said at a press conference in Gaza seaport that the boats consist of civilians and pose no danger to any party. “The Israeli occupation is the title for the blockade imposed on the Gaza Strip and the suffering of its people,” Al-Batsh said, adding that the protest trip holds a message to the international community that it is time for the Israeli blockade on Gaza to be lifted. 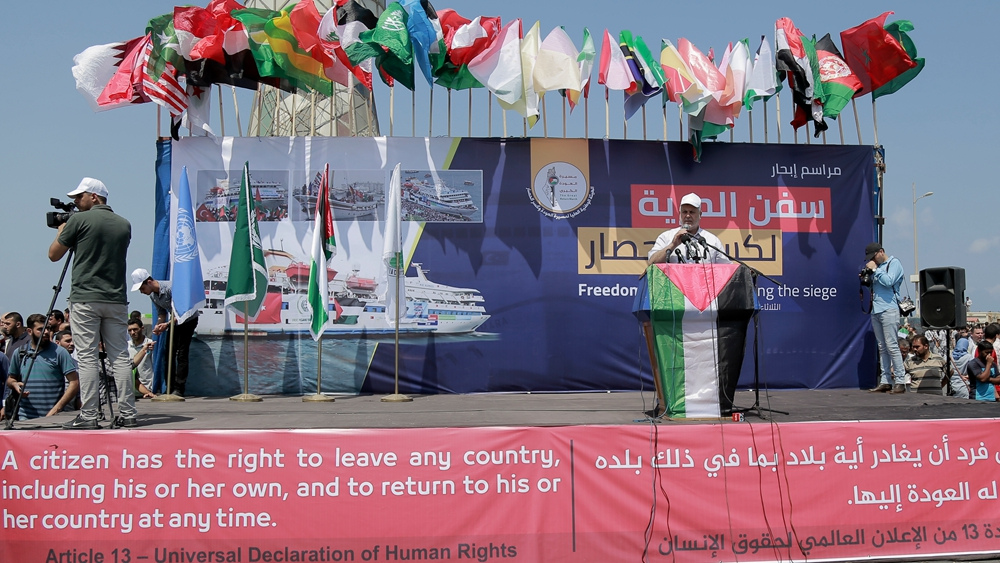 Khaled Al-Batsh, one of the leaders of the High Committee of the Great Return March during the press conference in Gaza Port, May 29, 2018. /CGTN Photo

Mahmoud Abu Attya, a Palestinian young man who was injured in a protest near the Israeli border several weeks ago, was one of the 20 passengers aboard. “There is no treatment and medicines at hospitals in Gaza. Hospitals fall short of providing medical services for us as injured people. That is why we have decided to go on this boat, instead of waiting for our slow death in Gaza,” he said. 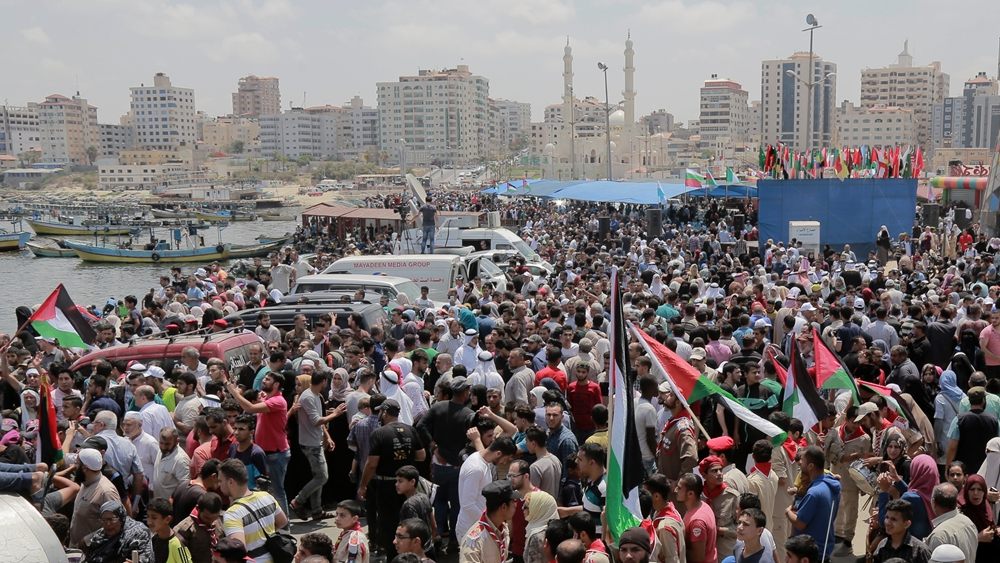 Hundreds of Palestinians gather in the Gaza port, to bid farewell to those getting on boats breaking the siege, 29 May. 2018. /CGTN Photo

The vessels made their way through the Mediterranean accompanied by dozens of smaller boats waving Palestinian flags in a show of support. They later returned to Gaza coast. Meanwhile, the Israeli army surrounded the Palestinian boats at a distance of 14 nautical miles from the Israeli side, arrested all of the passengers aboard, and led them to the port of Ashdod in southern Israel.

Organizers of the flotilla said that the boats are also a continuation of the Great March of Return protests which began in Gaza in late March, to demand the right of return of Palestinians, this time, by opening a new protest front with Israel through the sea boundary. Committee’s member Adham Abu Selmeya held Israel fully responsible for the safety of all of the Palestinian passengers on the boats, and announced the sailing of more boats within the coming days in an attempt to break the Israeli blockade. 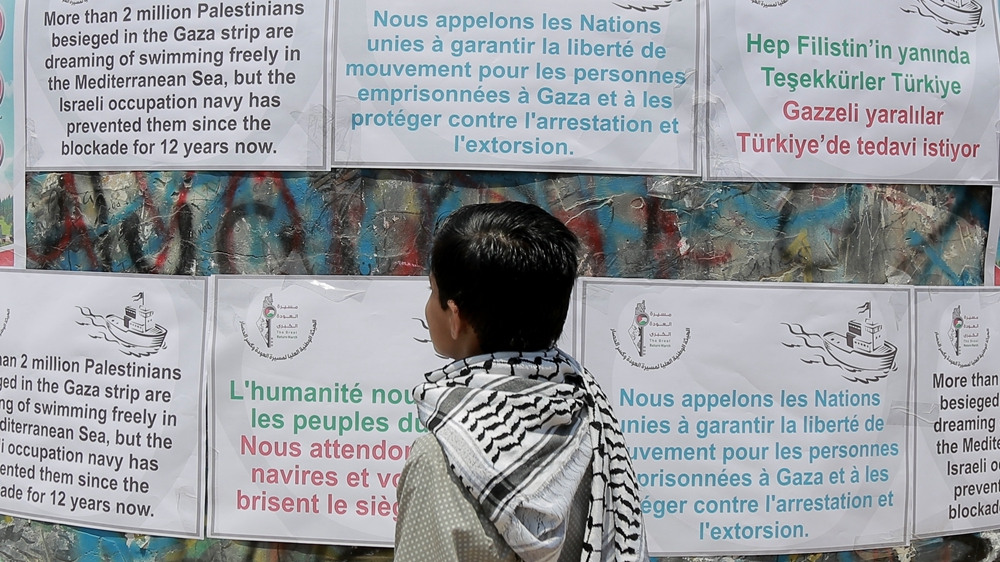 A Palestinian child stands in the Gaza port, in front of posters written in several languages demanding the lifting of the siege on the Gaza Strip, May 29, 2018. /CGTN Photo

In other developments, tensions ran especially high in the Gaza Strip on Tuesday as Israeli warplanes pounded Gaza with a wave of air strikes across the Palestinian territory, the worst since Operation Protective Edge in 2014, targeting Hamas and Islamic Jihad positions.

The strikes came in response to barrages of mortar shells and rockets fired by militants in Gaza toward Israeli communities surrounding the enclave, the Israeli military said in a statement.

Israeli sources said there had been 70 rockets or mortars fired from Gaza throughout the day and that three Israeli soldiers were wounded by shrapnel. There were no immediate reports of Palestinian casualties. Earlier on Tuesday, Israeli Prime Minister Benjamin Netanyahu threatened to retaliate with “great force” against any fire emerging from the strip.

Bundesliga: What to watch out for on Matchday 3

“Our facilities are at Azerbaijan’s disposal” – Turkey Defense Industry Minister

Turkey will return Manbij to its rightful owners: Erdogan