Residents of the Gaza Strip buried their dead on Saturday with calls for “revenge” a day after a major demonstration led to clashes that saw Israeli forces kill 16 Palestinians in the bloodiest day since a 2014 war.

But while anger seethed over Friday’s events, only several hundred protesters returned to tents erected at different sites near the Gaza Strip’s border with Israel to resume demonstrations planned to last six weeks in the blockaded enclave.

Gaza’s health ministry said 10 people suffered wounds that were not life-threatening in low-level clashes along the border on Saturday.

Thousands attended funerals for 14 of those killed – two were buried on Friday – with mourners holding Palestinian flags and some chanting “revenge” and firing into the air. 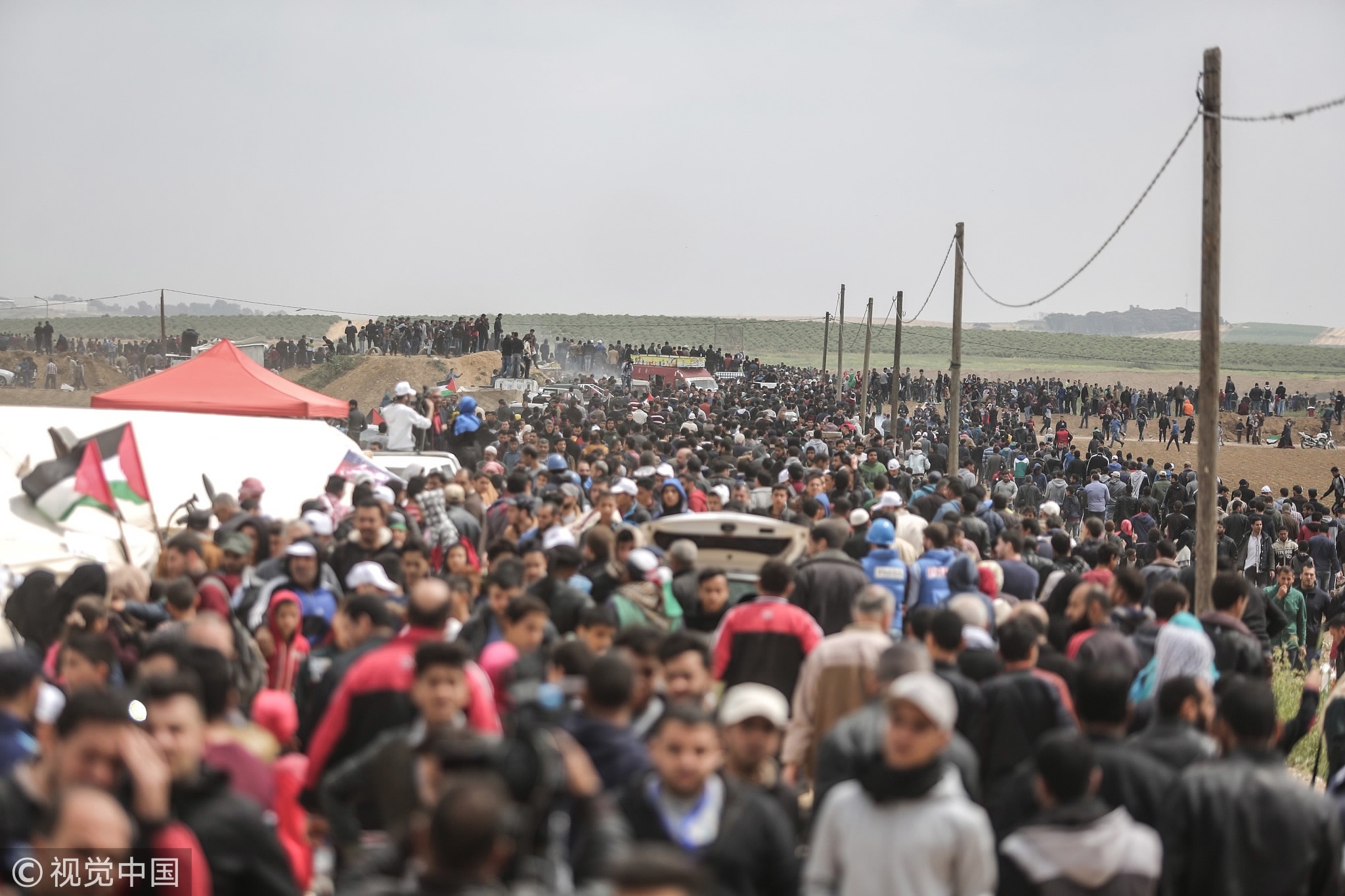 The armed wing of Hamas, the Islamist movement that runs the Gaza Strip, said five of those killed were its members who were participating “in popular events side-by-side with their people.”

“Where are you, Arabs? Where are you, Muslims?” mourners chanted at one funeral, calling on the Arab and Muslim world to intervene.

A general strike was being held in both the Gaza Strip and the occupied West Bank.

Minor clashes broke out between Israeli forces and Palestinians in Hebron, while a small protest was held in Nablus, both in the West Bank.

In addition to the 16 Palestinians killed, more than 1,400 were also wounded Friday, 758 of them by live fire, with the remainder hurt by rubber bullets and tear gas inhalation, according to the Gazan health ministry.

Israel defended its soldiers’ actions, when troops opened fire on Palestinians who strayed from the main protest camp attended by tens of thousands and approached the heavily fortified fence cutting off the Gaza Strip.

The Israeli military says it opened fire only when necessary against those throwing stones and firebombs or rolling tires at soldiers. 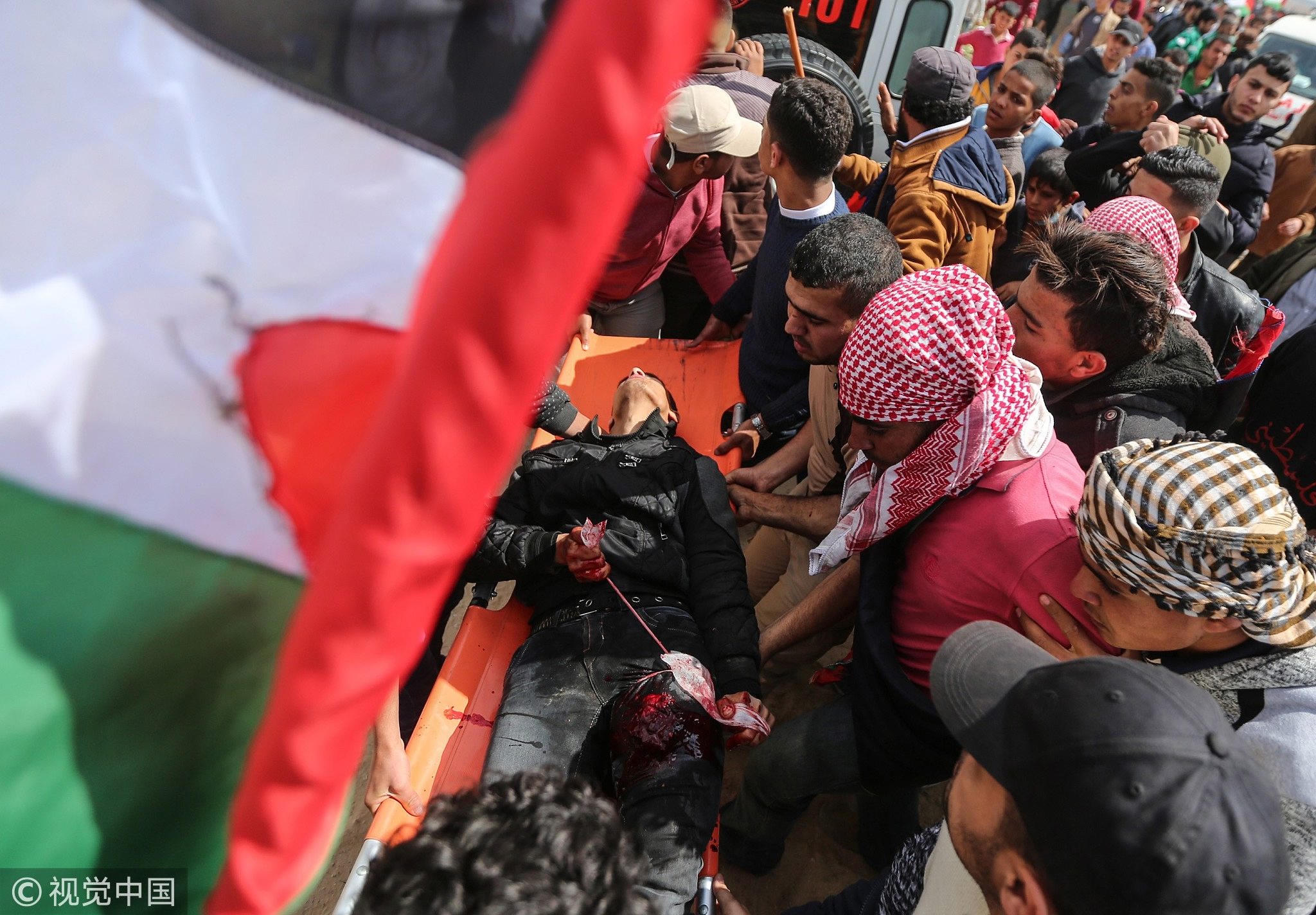 A wounded demonstrator is moved away from the site after the intervention of Israeli forces during the demonstration under the name of the “Great Return March” at the Israeli border in eastern Khan Yunis, Gaza on March 30, 2018. /VCG Photo

It said there were attempts to damage the fence and infiltrate Israel, while alleging there was also an attempted gun attack against soldiers along the border. No casualties were reported among Israelis.

Palestinians accused Israel of using disproportionate force, saying its soldiers opened fire on protesters who did not pose a threat, while human rights groups questioned Israel’s use of live fire.

Palestinian President Mahmoud Abbas declared Saturday a day of national mourning and in a speech said he held Israel fully responsible for the deaths.

His spokesman on Saturday called on the United States at the UN Security Council to not provide “cover for Israel to continue its aggression against the Palestinian people.”

An Israeli military spokesman said Friday’s events were “not a protest demonstration” but “organized terrorist activity” by Hamas, which has fought three wars with Israel since 2008.

“If it continues, we shall have no choice but to respond inside the Gaza Strip against terrorist targets which we understand to be behind these events,” Brigadier General Ronen Manelis told journalists. 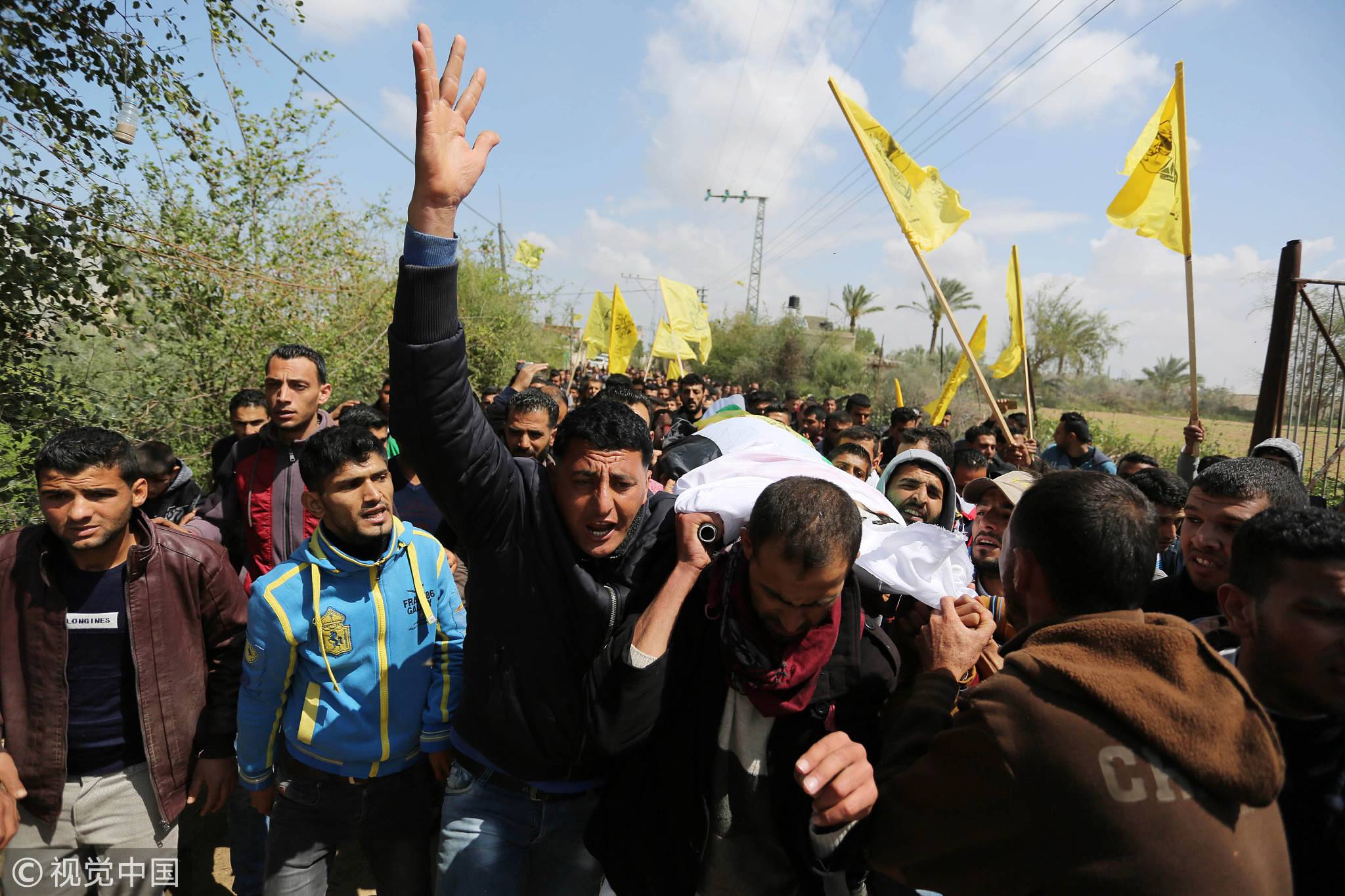 Palestinians carry the body of 27-year-old farmer Omar Samour, who was killed earlier in the day by Israeli tank fire, during his funeral in Khan Yunis in the southern Gaza strip on March 30, 2018. /VCG Photo

The six-week protest is in support of Palestinian refugees for the right to return to their home before the Israeli occupation.

It began on Land Day, when Palestinians commemorate the killing of six unarmed Arab protesters in Israel in 1976, and as Jewish Israelis readied to observe the Passover holiday, which started at sundown on Friday.

Protests will continue until the United States opens its new Jerusalem embassy around May 14, a move that has provoked deep anger among the Palestinians, who see the city’s annexed eastern sector as the capital of their future state.

May 14 will also mark 70 years since the creation of Israel, while Palestinians will mark what they call the Nakba, or “catastrophe,” the following day.

The Nakba commemorates the more than 700,000 Palestinians who either fled or were expelled from their homes in the war surrounding Israel’s creation in 1948.

US President Donald Trump has harshly criticized the Palestinians in the past, but the State Department said only that it was “deeply saddened” by the loss of life and urged steps to lower tensions. 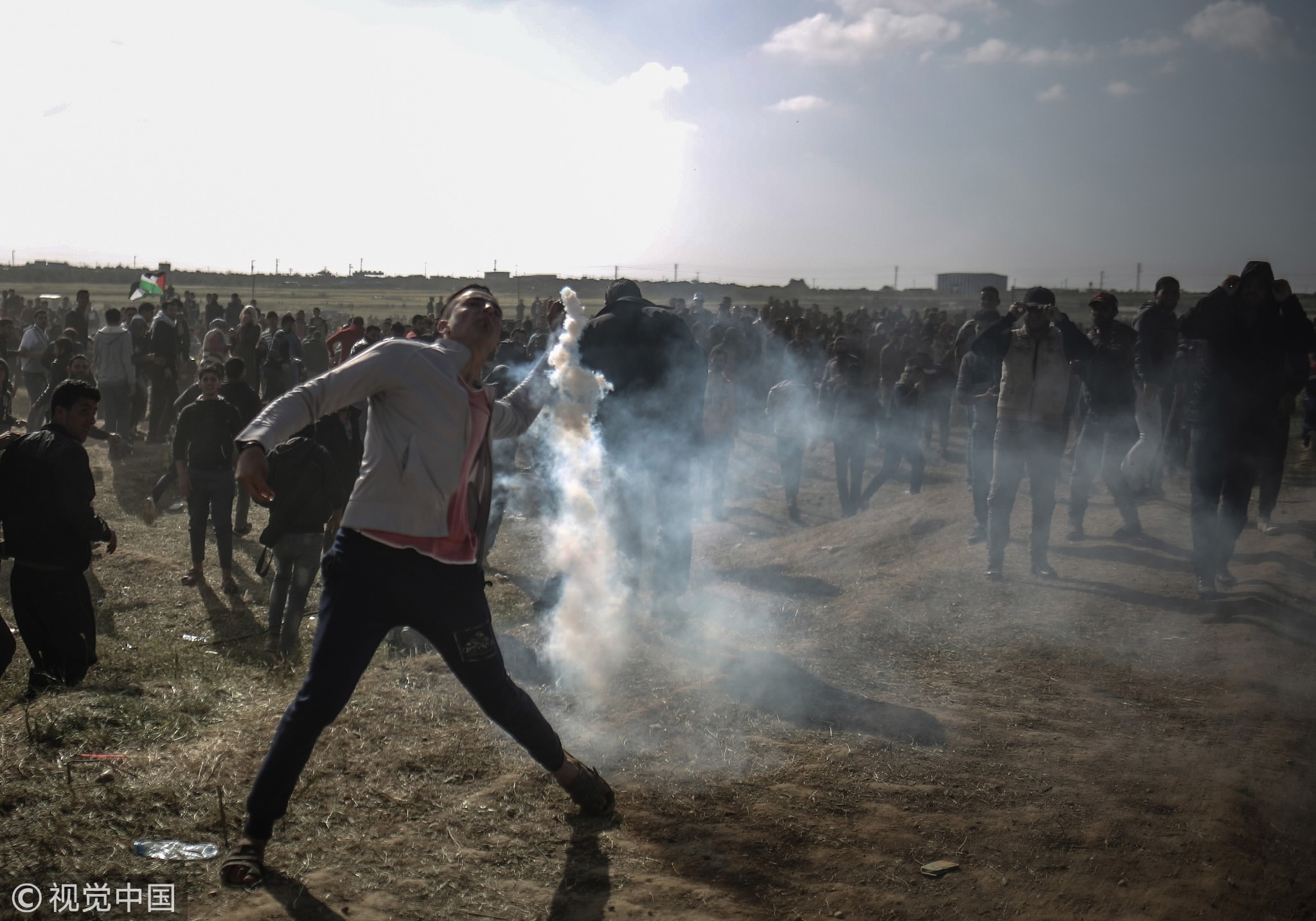 A Palestinian demonstrator throws a gas canister back to Israeli forces after their intervention during the “Great March of Return” at Ez-Zeitoun town south of Gaza City, Gaza on March 30, 2018. /VCG Photo

“Israeli allegations of violence by some protesters do not change the fact that using lethal force is banned by international law except to meet an imminent threat to life,” the New York-based group said, calling the number of killed and wounded “shocking.”

Israel had deployed troop reinforcements along the border, including more than 100 special forces snipers, saying it would prevent attempts to break through the fence.

Protests along the border are common, often culminating in young Palestinian men throwing stones at Israeli soldiers who respond with tear gas along with rubber and live bullets.

But the “March of Return” protest that began on Friday is on a larger scale and intended to involve families with women and children camping in tent cities near the border for weeks.

Israel should be brought to (ICC) International Criminal Court – envoy

If the nuclear deal collapses, Iran will restart uranium enrichment