An oil tanker crashed and exploded on a road in Pakistan on Sunday, killing 146 people, many of whom were collecting leaking fuel before it ignited, government officials and rescue workers said.

The speeding tanker overturned on a sharp bend on a highway on the outskirts of the city of Bahawalpur. The driver lost control when the vehicle blew a tyre, a provincial government spokesman said.

A large crowd of people gathered, many to collect fuel in containers, and the tanker exploded in a huge fireball about 45 minutes later. Rescue workers said that about 80 people had been injured.

“People of the area and passers by had started gathering fuel when it exploded, burning everybody,” provincial government spokesman Malik Muhammad Ahmed Khan told Reuters.

An estimated 20 children were among the dead, he said.

The accident happened the day before Pakistan celebrates the Eid al-Fitr festival, when families get together to celebrate the end of the fasting month of Ramadan.

Many bodies were burnt beyond recognition and television pictures showed piles of burnt out motorcycles, apparently those of people who were collecting fuel or watching events unfold.

Police had tried to clear the area before the tanker exploded but people ignored them, Khan said, adding that the initial crash had blocked the road, causing a traffic tailback. 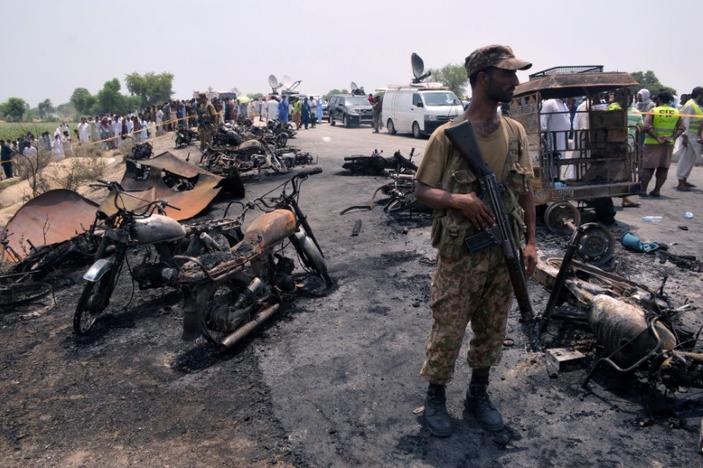 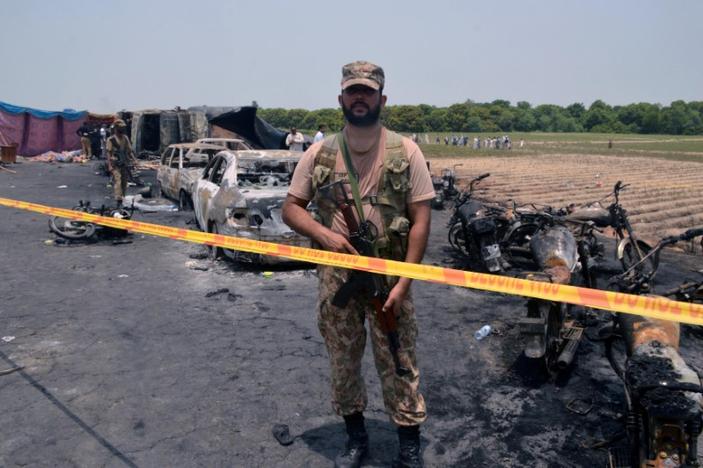 A soldier stands guard at the scene of an oil tanker explosion in Bahawalpur, Pakistan June 25, 2017. REUTERS/Stringer

The driver of the tanker survived the accident and was taken into police custody, he said.

The explosion took place on a stretch of highway cutting through the village of Ramzan Joya.

Khalil Ahmed, a 57-year-old former government employee who lives in the village, said he had lost 12 relatives in the fire, which firefighters extinguished in two hours.

“One body has been recovered and 11 others are still missing,” Ahmed said.

“After the spill, people began calling their relatives to come and gather the oil, and some showed up from nearby villages as well. There must have been 500 people gathered when the fire began.”

Oil is a precious commodity for villagers in Pakistan, where more than 60 percent of the population survives on $3 a day, according to a World Bank survey.

“People were collecting oil in bottles, cans and household utensils. We tried to get them to move back before the fire started but no one was listening,” Ahmed said.

He estimates that about 100 people from the small hamlet are missing.

“The day of judgement has arrived for our village,” he said.

About 50 people were killed in bomb attacks in Pakistan on Friday but there was no suggestion of an attack on Sunday.

Police in the area could not be reached for immediate comment.

About 40 people with serious burns were airlifted to hospitals in the nearby city of Multan.

For a map showing the location of the oil tanker explosion in Pakistan click – tmsnrt.rs/2sF1wxc

U.S. assessing if Russian use of Iran base violates U.N. resolution

China moves to tighten its grip over Hong Kong with security...

Trump administration to restore partial US funding to WHO, report says