Oil prices on Thursday rose on the back of plunging exports by OPEC-member Venezuela, recovering some ground lost in the previous session, although another surge in US production still weighed on markets, traders said.

Venezuela, a member of the Organization of the Petroleum Exporting Countries (OPEC), is struggling to meet its supply obligations, with dozens of tankers waiting to take on its oil.

Tankers waiting to load more than 24 million barrels of crude, almost as much as PDVSA shipped in April, are sitting off the country’s main oil port, according to shipping data. The backlog is so severe that state-owned PDVSA has told some customers it may declare force majeure, allowing it to temporarily halt contracts, if they do not accept new delivery terms.

“The decline in Venezuelan supplies has been bigger than the market expected. Increases in US production will not be able to fully offset the drop from Venezuela and Iran,” said Bruce Xue, oil analyst with Haitong Futures.

Venezuela’s supply trouble comes amid voluntary production cuts by OPEC which have been in place since 2017 in order to tighten the market and prop up prices.

The group is due to meet at its headquarters in Vienna, together with top producer but non-OPEC member Russia, on June 22 to discuss production policy.

OPEC-member Iraq said on Wednesday that a production increase was not on the table as the market was stable and prices good.

This comment followed an unofficial request from the US asking OPEC’s de-facto leader Saudi Arabia to boost output.

Outside OPEC, however, there were ongoing signs of rising output.

A graphic on US oil production and inventories. /Reuters Photo

US crude oil production C-OUT-T-EIA hit another record last week at 10.8 million barrels per day (bpd). That’s a 28 percent gain in two years, or an average 2.3 percent growth rate per month since mid-2016.

Surging US production has helped widen WTI’s discount to Brent to more than 10 US dollars per barrel CL-LCO1=R.

The US is close to becoming the world’s biggest crude oil producer, edging nearer to the 11 million bpd churned out by Russia, with exports also surging.

US crude inventories also rose, gaining 2.1 million barrels in the week to June 1, to 436.6 million barrels, the Energy Information Administration said on Wednesday. 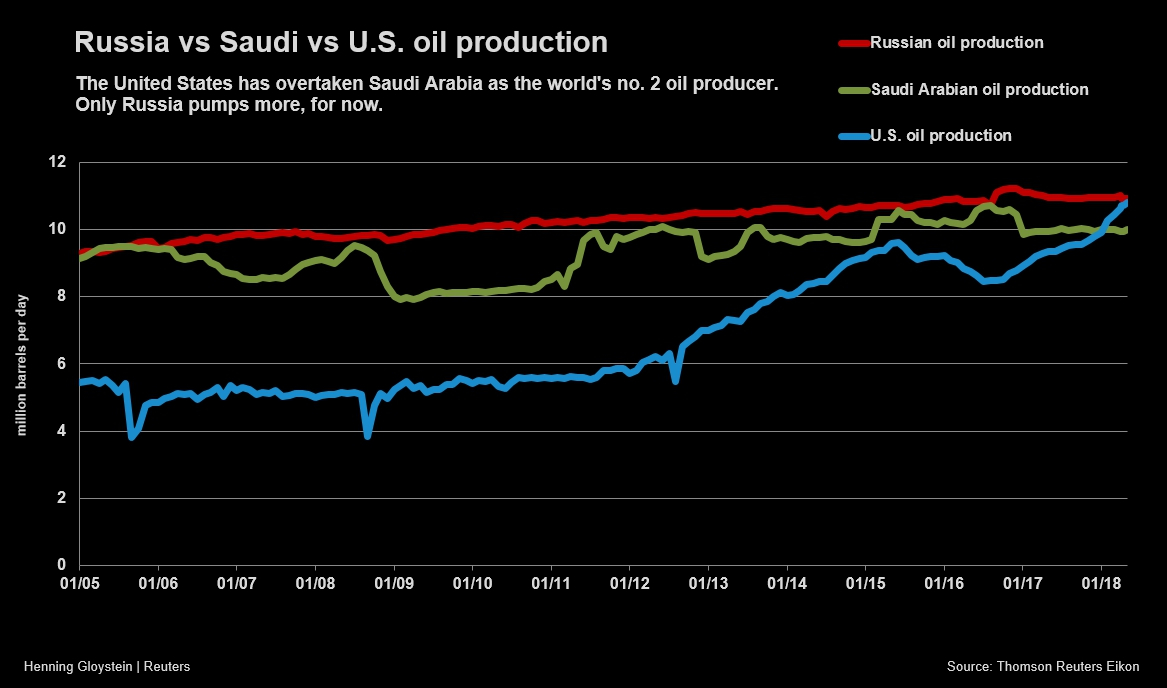 North Korea says use of strength not an American monopoly, accuses...

Talks with Russia on 2nd batch of S-400s to Turkey continue...

Winter surge could be prevented by covid vaccinating teenagers – expert

Britain accuses Russia of “making the situation worse” in Syria