The final declaration from the Organisation of Islamic Cooperation summit in Istanbul also condemned the US recognition of Jerusalem as Israel’s capital.

Pushing back against last week’s US declaration by President Donald Trump, the final communique of the Organisation of the Islamic Cooperation (OIC) Istanbul summit on Wednesday recognised East Jerusalem as the capital of Palestine and called on the international community to do the same.

The communique came after Muslims leaders, including Palestinian President Mahmoud Abbas, gathered at an extraordinary summit of the OIC in Turkey’s commercial capital, Istanbul. Palestine has been an OIC member state for nearly 30 years.

Speaking at the summit, Turkey’s President Recep Tayyip Erdogan said the United States can no longer be the mediator between Israel and Palestine.

The communique said the OIC “rejects and condemns in the strongest terms the unilateral decision by the president of the United States of America recognising Jerusalem as the so-called capital of Israel, the occupying power.”

The 57-member bloc also affirmed “its readiness to take the Jerusalem issue to the UN General Assembly if the UN Security Council fails to take action” against the “grave violation” represented by the US decision.

Turkey’s Foreign Minister Mevlut Cavusoglu said the meeting rejected and condemned the US move “in the strongest terms.” 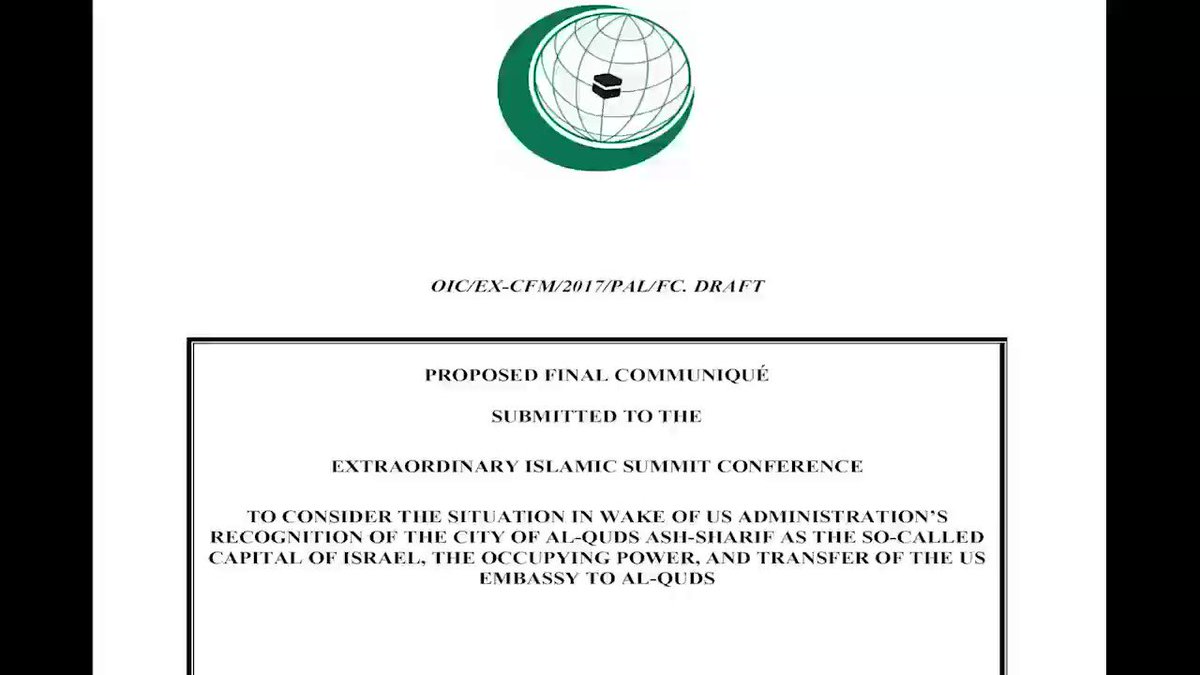 THE FINAL COMMUNIQUE OF THE EXTRAORDINARY ISLAMIC SUMMIT CONFERENCE
TO CONSIDER THE SITUATION IN WAKE OF US ADMINISTRATION’S RECOGNITION OF THE CITY OF AL-QUDS ASH-SHARIF AS THE SO-CALLED CAPITAL OF ISRAEL, THE OCCUPYING POWER, AND TRANSFER OF THE US EMBASSY TO AL-QUDS

Trump announced his decision last week – despite widespread opposition across the Middle East, from Muslim and Muslim-majority countries, and from many traditional US allies – to formally recognise Jerusalem as Israel’s capital.

The announcement sparked strong condemnation from around the world, including from the Arab League, the OIC, the EU and the UN.

Jerusalem remains at the core of the Israel-Palestine conflict, with Palestinians hoping that East Jerusalem – now occupied by Israel – will eventually become the capital of a Palestinian state.

During his election campaign last year, Trump repeatedly promised to relocate the US Embassy in Israel from Tel Aviv to Jerusalem.

Uber stripped of London license over ‘pattern of safety failures’

U.S. could slow withdrawal of troops from Afghanistan due to latest...