Aid workers are scouring the world’s largest refugee camp for pregnant Rohingya rape victims, with a rush of births anticipated nine months after Myanmar forces unleashed “a frenzy of sexual violence” against women and girls from the Muslim minority.

Specialists and Rohingya volunteers are racing against time to find women in the giant camp who are thought to be hiding their pregnancies out of shame, as fears grow that newborns could be abandoned and new mothers may die without care in coming weeks.

Tosminara, herself a Rohingya refugee, has spent months coaxing these women out of the shadows, promising discretion.

“We tell them a password they can use when they arrive at the hospital or health post. The guard then sends the woman directly to the right spot,” said Tosminara, who goes by one name.

“They often are shy. Sometimes they are afraid to come forward.”

The Myanmar army crackdown last August drove roughly 700,000 Rohingya into Bangladesh and the number of pregnancies resulting from rape is not known. 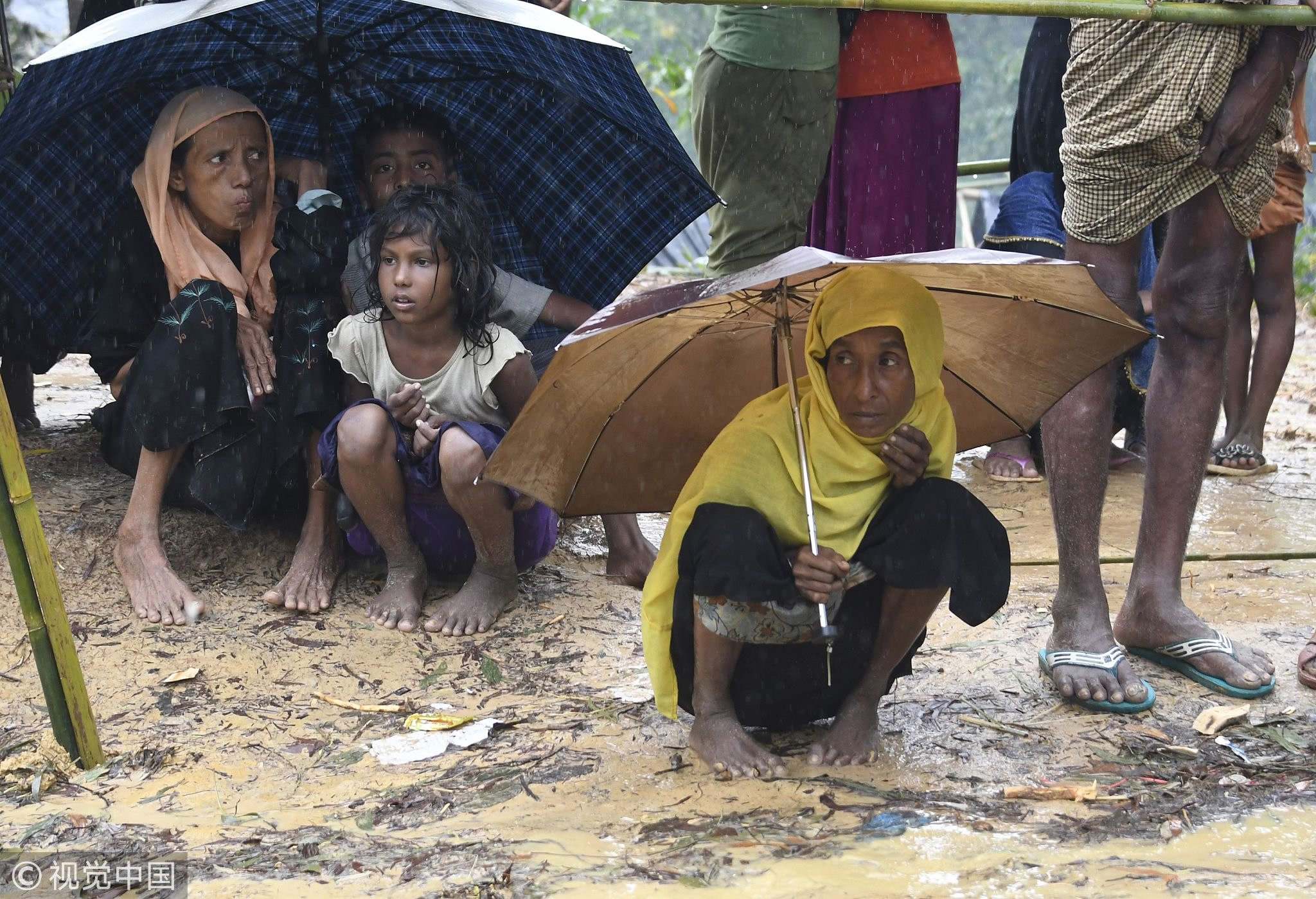 September 17, 2017: Rohingya refugees protect themselves from rain in Balukhali refugee camp near the Bangladesh town of Gumdhum. /VCG Photo

But UN Assistant Secretary-General for Human Rights Andrew Gilmour said there would “inevitably” be a spike in births soon given the “frenzy of sexual violence in August and September last year.”

An estimated 48,000 women will give birth in the camps this year. Those who were raped will be delivering imminently, mostly in secret and without medical care on the floors of bamboo shacks overlooking the Bangladesh-Myanmar border.

Rohingya community leader Abdur Rahim said he knew two women personally who were raped by soldiers and due within the month. He had heard rumors of many others in a similar position, he added.

“The Myanmar military raped them. These babies are… evidence of their crimes,” he said.

Tosminara says she is trying her best to find these women in the heaving camps. But volunteers must contend with a deep-rooted stigma that keeps many from revealing their ordeal.

“Sometimes neighbors say ‘don’t do anything, it will humiliate you further’. So they don’t want to come,” said Nurjahan Mitu, a doctor who trains midwives through a UN Population Fund program.

Many have sought clinical help to terminate pregnancies – legal in Bangladesh up to 12 weeks. 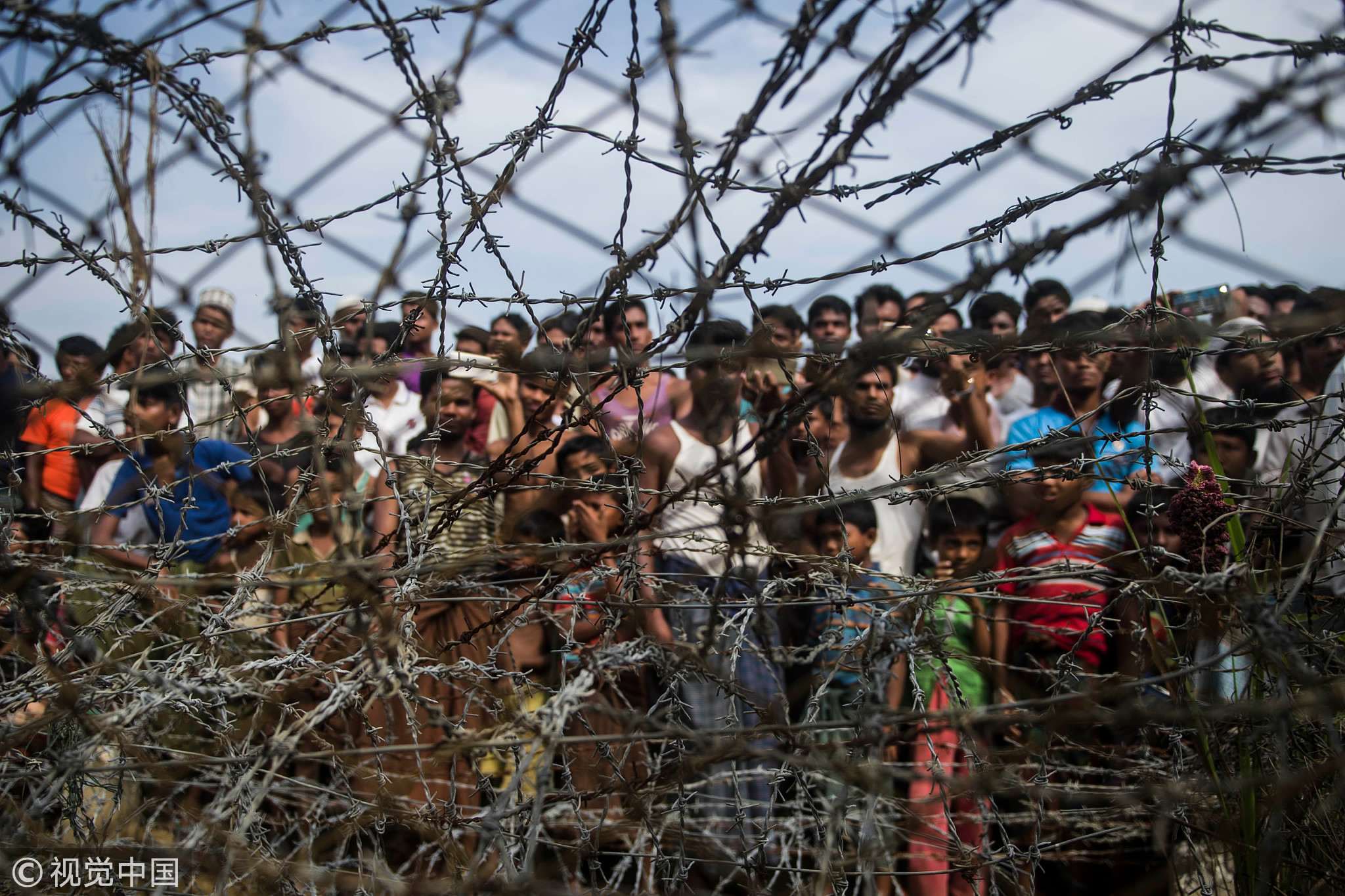 Rohingya refugees gather behind a barbed-wire fence in a temporary settlement setup in a “no man’s land” border zone between Myanmar and Bangladesh, April 25, 2018. /VCG Photo

The UN’s Gilmour, who toured the camps in March, said girls as young as 14 were self-inducing abortions.

Sofia, the midwife, assisted a 16-year-old with an abortion after the teenager arrived at her clinic in secret, terrified that her family would find out.

She said the girl was pregnant after being gang-raped by Myanmar soldiers, but had no one to support her through the trauma.

“Nobody knew about the rape. Her family were not aware of it,” said Sofia.

More than half the Rohingya who have fled into Bangladesh are women and girls.

Children are seen everywhere but adolescent girls are largely invisible, many kept indoors by families concerned for their welfare, experts say.

Emu Roy, a Bangladeshi midwife, said a paucity of maternity professionals made it difficult to know how many women were suffering in silence in the camps.

“It’s not possible for us to go door-to-door,” she said.

Experts are concerned that families could forcibly marry off teenage girls to cover up a pregnancy.

Others fear that newborns could be abandoned.

“Not only are you dealing with a woman who has been… traumatized, also there could be a child that is basically unwanted as well,” Kraay said. 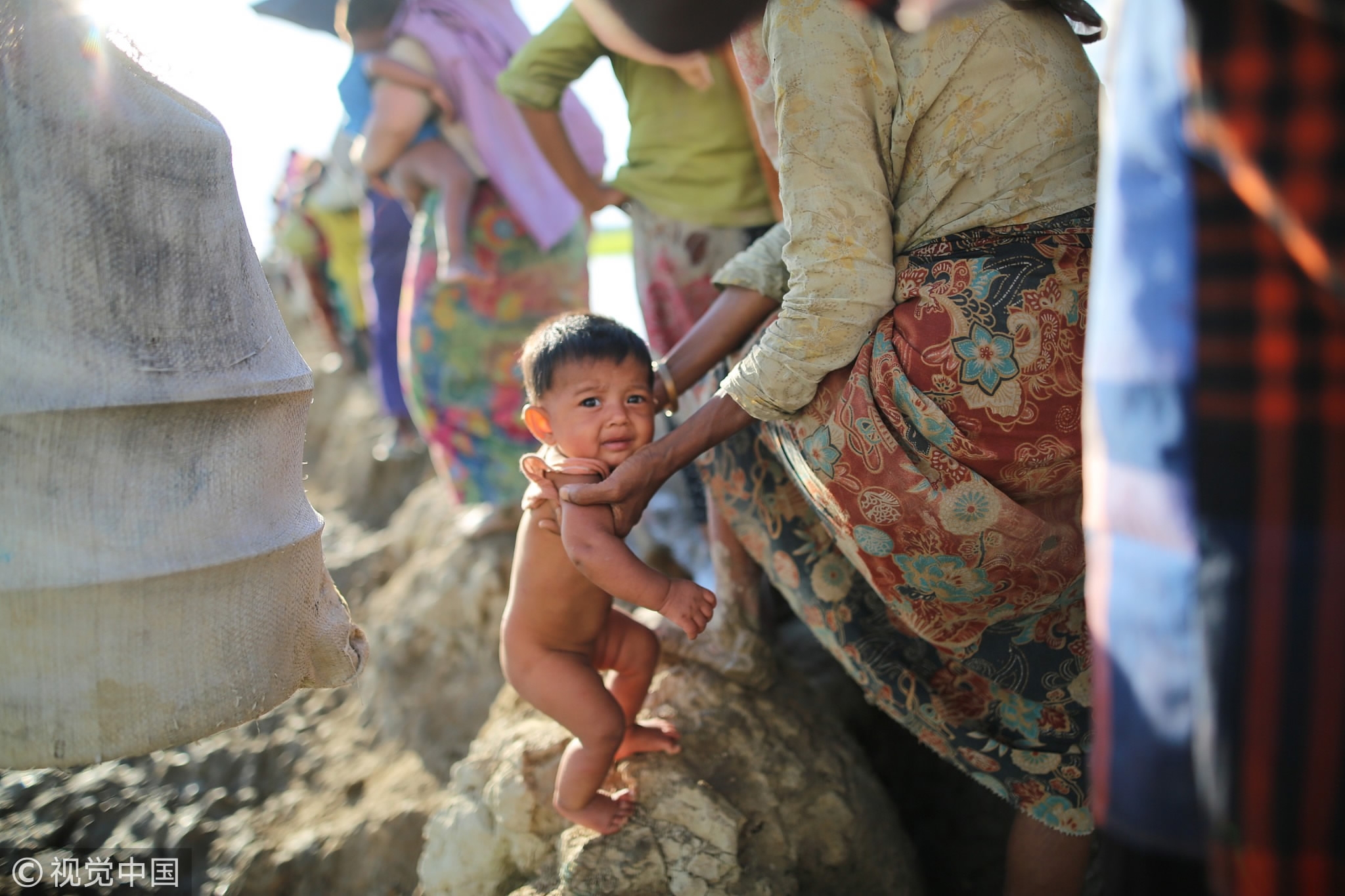 MSF alone treated 311 rape victims – women and girls aged between nine and 50 – between August and March but Kraay said this was “the tip of the iceberg”.

The Myanmar army chief has denied allegations his forces used rape to terrorize the Muslim minority.

But the military last month was placed on a UN blacklist for armies and rebels known to use rape in war – joining Nigeria’s Boko Haram and the ISIL.

On top of the refugees’ accounts, UN Special Representative on Sexual Violence in Conflict Pramila Patten said rape was used as a “calculated tool of terror” to force the Rohingya out of Myanmar.

As the nine-month milestone looms, aid workers are ready to assign abandoned children to women who can breastfeed them, until families are found in the Rohingya community.

“We really want all children – regardless of the conditions or the locations where they are born – to grow up in a happy environment,” said Save the Children’s Beatriz Ochoa.

Who is the new Taliban military chief?

England to scrap quarantine for fully jabbed EU and US visitors...

More work to be done to unlock Brexit talks – May,...

U.S. isolated on climate at summit of world leaders