The German coalition government is in peril as a rift over migration policy between Chancellor Angela Merkel and her interior minister Horst Seehofer comes to a head.

The governing coalition is made up of the conservative bloc of long-term allies the Christian Democratic Union (CDU) and Bavaria’s Christian Social Union (CSU) together with the Social Democrats (SPD).

The row, one element of a broader dispute within the European Union over migration policy, pits the open border approach favored by CDU leader Merkel against the hardline stance of the CSU chairman Seehofer.

Dublin regulation: Any asylum seeker must register their claim in the first EU state they enter (unless there is a compelling family reason for it to be made elsewhere). A disproportionate number of claims are therefore made in countries with external EU borders.

Quotas: A quota system was implemented in 2015 requiring all EU members to take in a certain number of migrants in a bid to ease pressure on countries with external EU borders. However, some states have resisted accepting asylum seekers.

Schengen: Germany is part of the Schengen area, which allows open borders with no routine passport checks though does have a provision for temporary controls. Merkel fears introducing permanent checks would contravene Schengen, and put the entire scheme in jeopardy.

Seehofer wants to institute policies which would allow migrants to be turned away at the German border. The CSU has opposed the chancellor’s open-door policy since 2015 when tens of thousands of migrants entered the country per day through Austria at the height of the crisis.

Merkel wants to reach an EU-wide deal on asylum seekers at an EU Council summit scheduled for June 28-89, and argues that by implementing a unilateral policy the burden would be increased on countries with external EU borders such as Greece and Italy. 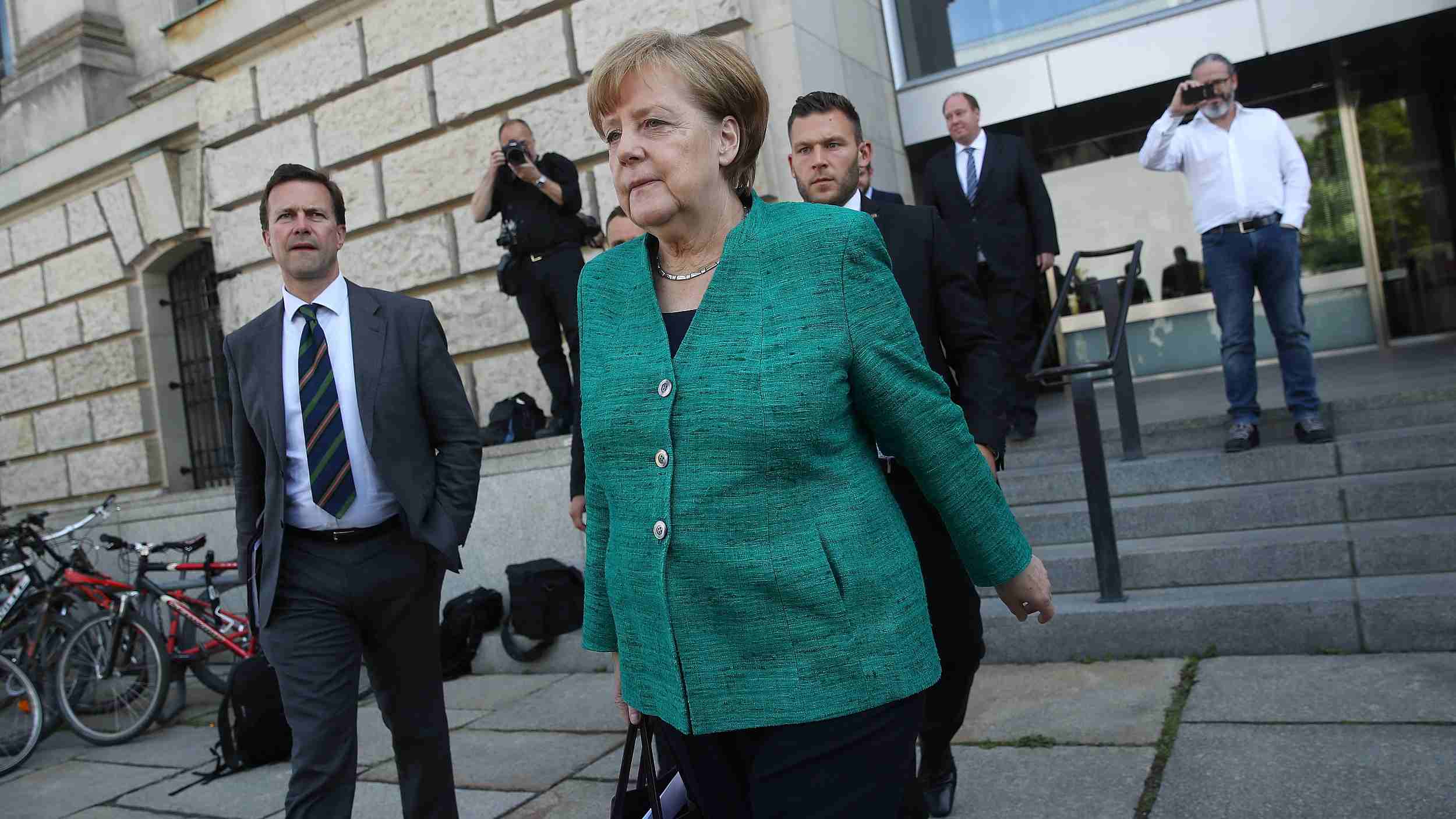 German Chancellor and leader of the CDU Angela Merkel departs from the Reichstag on June 14, 2018 in Berlin, Germany. /VCG Photo

“I see illegal migration as one of the major challenges of the European Union and therefore believe that we should not act unilaterally, or without consultation, and not at the expense of third parties,” the chancellor said on Thursday.

Bavaria is a major entry point for migrants to Germany, and the CSU is facing a challenge to its absolute majority in the region’s parliament from the right-wing Alternative for Germany in elections due in October.

Seehofer, who on Wednesday appeared with Austrian Chancellor Sebastian Kurz as he announced that the interior ministers in Vienna, Rome and Berlin had formed an “axis of the willing” to combat illegal immigration, had planned to announce a 63-point immigration plan on Tuesday but canceled after the disagreement with Merkel. 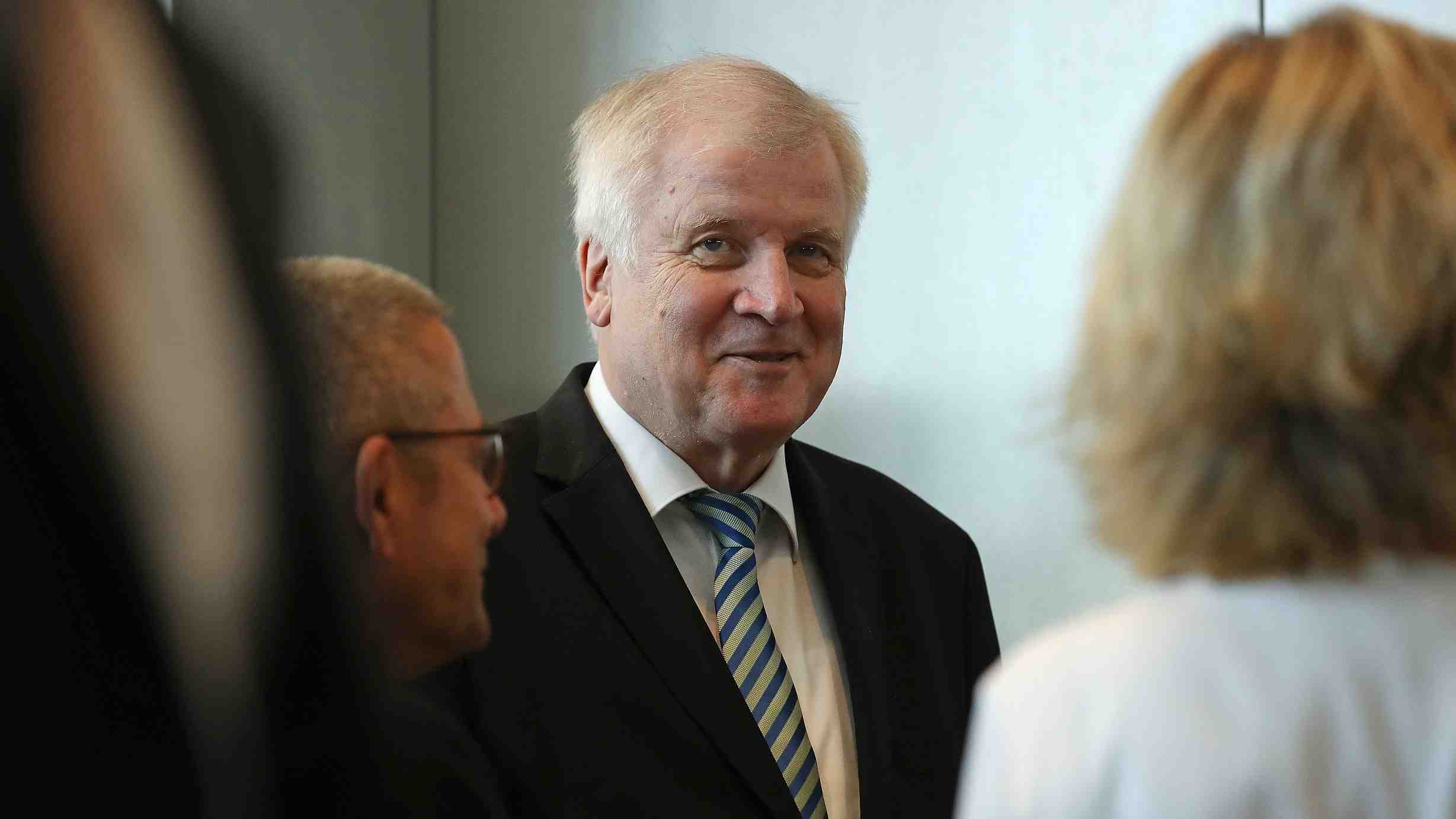 German Interior Minister Horst Seehofer and leader of the Bavarian CSU at the Bundestag on June 14, 2018 in Berlin, Germany. /VCG Photo

The German chancellor was unwilling to sign up to a plan that would allow border agencies to refuse entry to migrants who had no identification, who had registered for asylum in another EU country, or who had been previously refused asylum. Currently, such asylum seekers are processed in Germany, with some sent back to their EU-entry country or country of origin.

The CSU’s Alexander Dobrindt on Thursday insisted Seehofer has the authority to order police to turn back migrants, and, according to Deutsche Welle, the interior minister may press ahead with an announcement on border checks on Monday.

Merkel, who is reported to have requested two weeks to find a solution, indicated on Thursday she was willing to compromise by rejecting asylum seekers previously rejected by Germany. However, she has not said she will sign up to Seehofer’s plan in full, and the CSU has so far not accepted her policy shift as sufficient.

If Seehofer attempts to go ahead with his plan without Merkel’s sign off, she would face the prospect of backing or overruling him – with the latter likely to result in his departure from government and the coalition in serious danger of collapse.

AFP reported top-selling newspaper Bild argued on Thursday that “if no agreement is reached, Angela Merkel must face a vote of confidence and every lawmaker must decide … Keep going with Merkel’s way or face an adventure called fresh elections.”

Wales imposes two-week lockdown: ‘everybody must stay at home’

Dual tests for British PM as public prepare to give their...

Around 1,000 people risk death to reach UK in new Channel...