Prime Minister Theresa May promised on Wednesday to listen more closely to business concerns about Britain leaving the European Union as she set out a Brexit-focused government programme, pared back to reflect her weakened authority.

Chastened by an election which left her Conservative Party short of a majority in parliament and reopened debate on the nature of Britain’s EU exit, May also sidelined reform on social care, education and corporate governance.

May’s two-year programme, known as the Queen’s Speech and prepared by ministers, was read out by Queen Elizabeth at parliament’s opening ceremony. She has yet to secure a deal with Northern Ireland’s DUP party to prop up her government.

The queen told lawmakers from both the upper and lower houses of parliament that the government is committed to building “the widest possible consensus” on Brexit, working with parliament, devolved administrations, business and others.

“My government’s priority is to secure the best possible deal as the country leaves the European Union,” the queen said.

The traditionally ceremonial address, usually dominated by pageantry, was a crucial testing ground for May’s ability to run the country during its most challenging period for generations.

Her authority has been badly damaged just as Britain begins Brexit negotiations. Four militant attacks have raised questions about her grip on national security, and the death of at least 79 people in a tower block fire has become a flashpoint for public anger at her party’s record in government.

“The election result was not the one I hoped for, but this government will respond with humility and resolve to the message the electorate sent,” May said in remarks introducing the policy plan.

“First, we need to get Brexit right. That means getting a deal which delivers the result of last year’s referendum and does so in a way that commands maximum public support.”

The shift to a more consultative tack drew a cautious welcome from business groups, which worry that May’s plan focuses more on controlling immigration than protecting the economy.

Her new approach will be tested almost immediately, when she travels to Brussels on Thursday for a summit of EU leaders.

Lawmakers will have to approve the speech in a vote, expected on June 29, that will be a de facto vote of confidence. Minority governments are a rare occurrence in British parliamentary politics where the electoral system usually produces a governing majority. 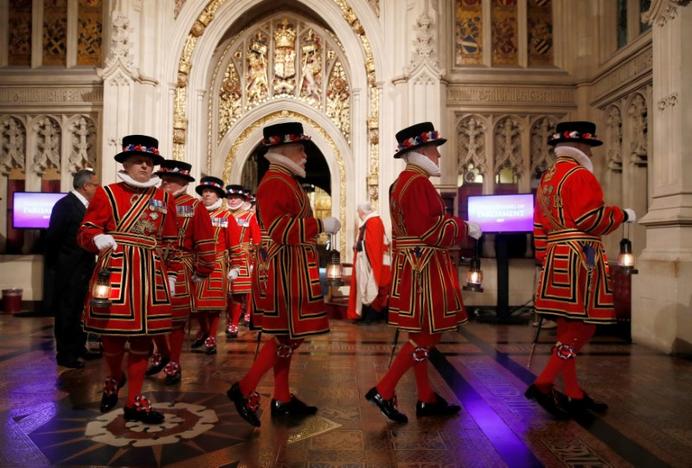 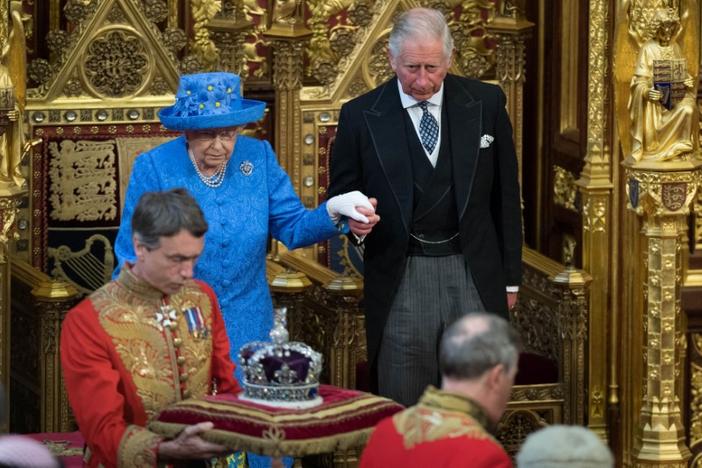 May is under increasing pressure to do a deal with the DUP (Democratic Unionist Party) to support her government after nearly two weeks of talks.

Jeremy Corbyn, leader of the opposition Labour Party, whose surprisingly strong election performance damaged May, called the speech “thin gruel”. He said the government was ignoring the need for important domestic reforms to promote social justice.

“A threadbare legislative programme from a government that has lost its majority and apparently run out of ideas altogether,” he told parliament.

The Queen delivered the speech in a toned-down ceremony that dispensed with a horse-drawn procession to parliament, and she swapped her crown for a blue hat. The changes to the ceremony were planned and due to a lack of rehearsal time.

She was accompanied by Prince Charles after her 96-year-old husband, Philip, was taken to hospital with an infection.

As London sweltered in unseasonably hot weather, about 250 protesters gathered outside parliament after the speech, blaming the deadly fire in west London on years of Conservative cuts and demanding the fall of May’s government.

May apologised for the government’s inadequate response to that fire and acknowledged the country faced “difficult times”.

“Not every problem can be solved by an act of parliament,” she said. “Our response to disaster and acts of terror which take the lives of innocent people must be this: compassion, unity, resolve.”

The legislative programme spelt out a Brexit-dominated set of policies and indicated May was keen to secure broad support for leaving the EU – a change in tone from the strident approach she set out before the June 8 election.

“While this will be a government that consults and listens, we are clear that we are going to see Brexit through, working with parliament, business, the devolved administrations and others to ensure a smooth and orderly withdrawal,” she said.

A briefing document issued alongside the speech said the government would consult more closely with businesses and other interested parties to “test and validate positions and to continue to build support from the business community as we move forward”.

“This welcome change in tone needs to be backed by clarity and action now,” the Director-General of the Confederation of British Industry lobby group, Carolyn Fairbairn, said.

“Firms will expect all politicians to put pragmatism before politics, starting with Brexit,” she said.

Manufacturers’ group EEF said industry needed more information on how the benefits of the EU’s single market and customs union would be maintained throughout Britain’s exit.

“There must be a much closer partnership with industry if we’re to avoid economic chaos when we leave the EU,” EEF Chief Executive Terry Scuoler said.

May’s programme for government was largely restricted to the technical work of making sure Brexit can happen: a bill that sets out how the government will transpose huge swathes of EU law into British law and separate bills on related topics such as immigration, customs and fisheries.

Beyond Brexit, the plan included a promise to pay more attention to public concerns about austerity, but did not alter the government’s commitment to bring down the budget deficit.

It also outlined plans to allow sectors such as electric vehicles and satellite technology to maintain a competitive edge, as well as promising to deliver an industrial strategy that spread prosperity across the country.

May’s plans will need the support of Northern Ireland’s DUP, which is expected to use its 10 votes to back her in exchange for more funding to the province, policies geared towards boosting its economy and assurances that Brexit will not cut it off from the neighbouring Irish Republic.

But that deal has yet to be announced, and on Tuesday the DUP said the talks were not going as was expected. The party should not be taken for granted, it said.

(This story has been refiled to correct dateline to June 21)

Malaysia’s king steps down from throne

President Biden pulling all US Troops from Afghanistan by Sept 11