As the United Arab Emirates’ (UAE) expansionist policies stretch across the Middle East and North Africa, resentment towards the kingdom in Sudan is rising.

Recently, Sudanese families protested outside the UAE embassy in the capital Khartoum against an Emirati company which they allege has sent their children to fight in Yemen and Libya, local Sudanese media reported.

Carrying banners reading “No to mercenary activities” and “No to deception”, the protesters demanded Emirati authorities bring their sons back home safely and that the Sudanese government intervene immediately.

Over the past few days, several Sudanese media outlets reported that the UAE-based Black Shield Security Services Company is sending young Sudanese to war when they had only signed a contract with the company to work as security guards inside the Gulf country.

The protests kicked off after a young Sudanese man urged the country’s government to take action after his brother was allegedly taken into a military training camp in the UAE.

Abdullah Al Tayeb Yusuf said that his brother travelled to the UAE after responding to a job posting advertising openings for security guards. Upon his arrival, they claim he was forcibly sent to a military training camp.

“My brother told me that he was trained in the UAE to handle heavy weapons, and he was given the option to either go to Yemen or Libya after they offered him a large sum of money,” Yusuf said.

Wakeep, a Sudanese blog, posted images of what it called samples of contracts offered to Sudanese youth to work as guards by the Black Shield company. The contracts appeared to be stamped by the Emirati embassy in Khartoum. 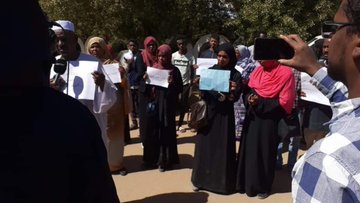 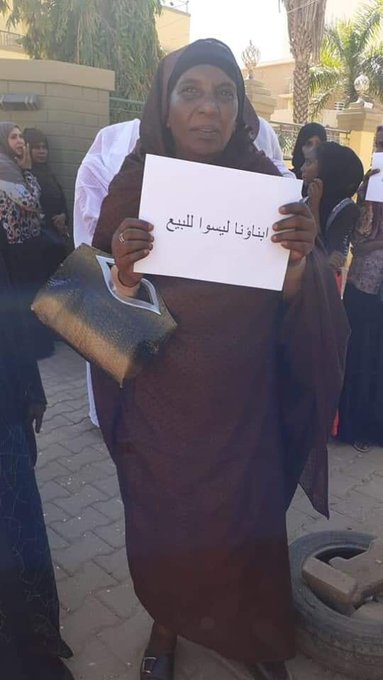 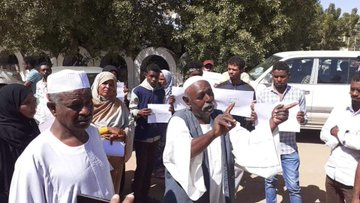 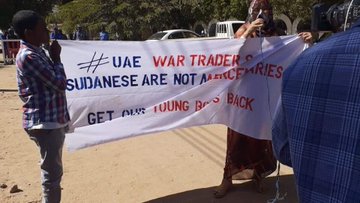 2:03 PM – Jan 26, 2020
Twitter Ads info and privacy
The claims, which went viral in Sudan, once again questioned the UAE’s controversial role of Sudan in the devastating military campaigns in Yemen and Libya.

In Libya, the UAE financially and militarily backs the warlord Khalifa Haftar, who is conducting an offensive on the capital of Tripoli where the UN-recognised Government of National Accord is based.

The US-supported Saudi-led military intervention in Yemen, called “the world’s worst humanitarian crisis” by the United Nations, has led as many as 12 million Yemenis to the brink of starvation, deadly cholera and killed thousands of civilians.

The Gulf kingdoms which lack sizeable troops with little war experience turned to Sudan where millions of youth have suffered for decades from a civil war, dictatorship and harsh economic conditions.

On the other side, Sudan’s former dictator Omar Al Bashir whose rule was squeezed by economic sanctions and international isolation, aligned with Gulf countries at the expense of its decade-old ties with their archrival Iran.

Desperately hoping for financial help from the rich Gulf to maintain his rule, Bashir deployed troops to Yemen in 2015 to counter the Iran-backed Houthi rebels.

Many of the Sudanese men hired by Saudi Arabia have been from the Rapid Support Forces or the Janjaweed.

These militias played a critical role as Bashir’s main source of power on the ground in his war in Darfur where about 300,000 people were killed and 1.2 million displaced.

According to the UN investigation, they committed the systematic rape of women and girls, indiscriminate killings and war crimes during the brutal Darfur war.

Janjaweed’s leader General Mohammed Hamdan Dagalo who waged the militia war in Darfur became the architect of Sudan’s military campaign in Yemen war, sending as many as 30,000 men.

After the military coup in April last year, which came after nationwide protests against Bashir’s rule, Dangalo became vice president of Sudan’s Transitional Military Council and is considered as the de-facto ruler.

And unsurprisingly, the first country he visited was Saudi Arabia which pledged $3 billion along with UAE in financial and material aid to the military rule that was suffering from a cash shortage.

“Sudan stands with the kingdom against all threats and attacks from Iran and Houthi militias,” he said.

However, Sudan’s new civilian government, formed under a power-sharing deal with the military council, seems opposed to Sudan’s involvement in the Yemen war.

Prime Minister Abdalla Hamdok, during his US visit, gave a hint of what might be a potential climbdown from Sudan’s pro-Gulf stance.

Hamdok announced that the number of Sudanese troops in Yemen has been reduced from 15,000 to 5,000.

The Sudanese government’s policy shift might take more time to come into effect but in the streets of Khartoum, the Sudanese people are clearly opposed to their sons being used as mercenaries in Yemen.

Hundreds of neo-Nazi on the run in Germany

Turkey to move into Manbij if YPG refuses to clear the...