“A person … who talks about and treats women like they’re pieces of meat, who lies constantly about matters big and small and insists the American people believe it, that person’s not fit to be president of the United States, on moral grounds,” Comey said in an exclusive interview with ABC News’ George Stephanopoulos, which aired at 10 p.m. on Sunday.

“He is morally unfit to be president,” he added. 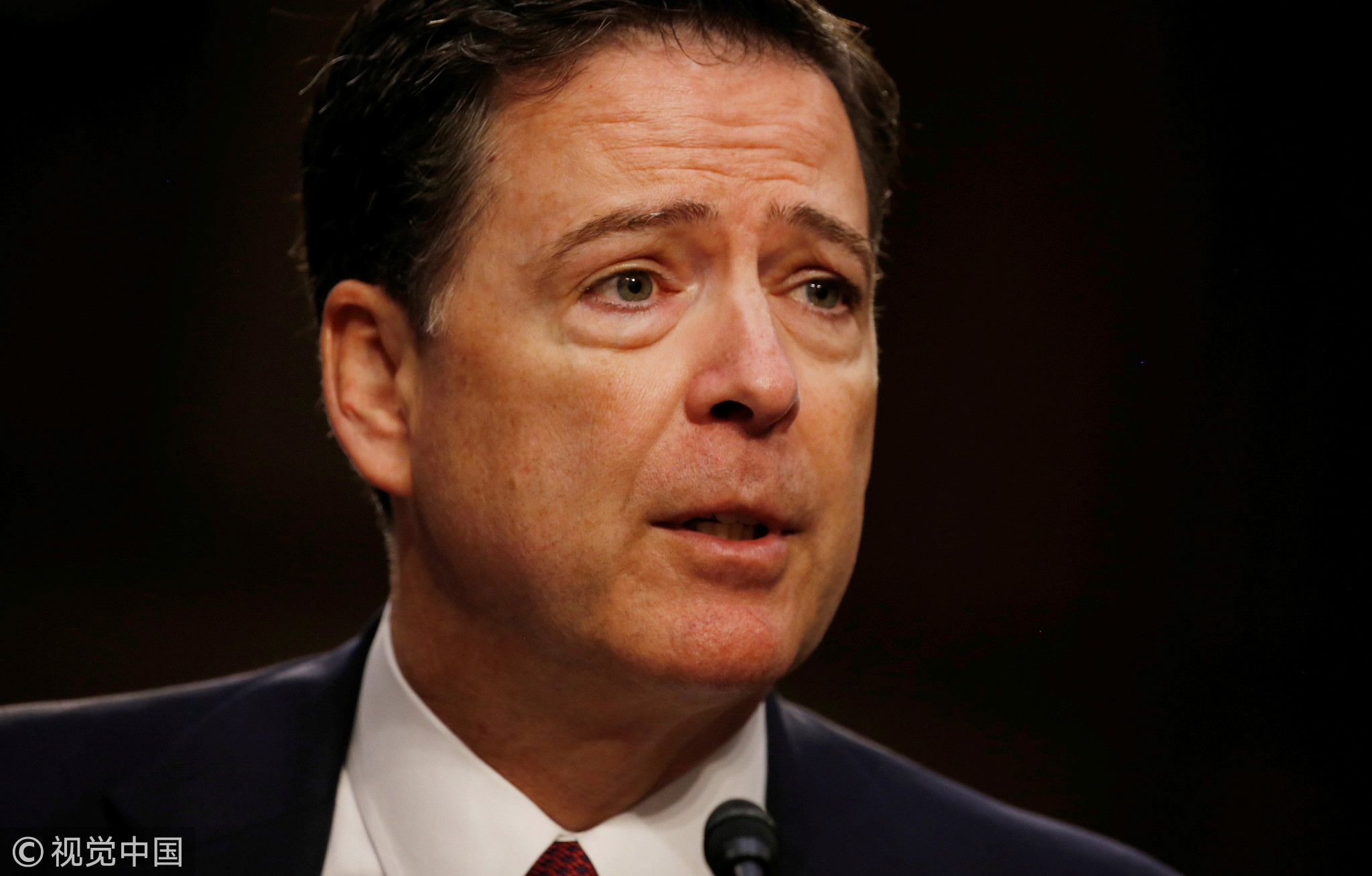 Former FBI Director James Comey testifies before a Senate Intelligence Committee hearing on Russia’s alleged interference in the 2016 US presidential election on Capitol Hill in Washington, US, June 8, 2017. /VCG Photo

Trump was into another furious Twitter tirade against Comey, whom he fired in May, three days before Comey’s memoir “A Higher Loyalty: Truth, Lies and Leadership” is due out.

The book likens Trump to a dishonest, ego-driven mob boss and says he demanded Comey’s personal pledge of loyalty — a damning account that has infuriated the president at a moment of intensifying legal pressure on other fronts.

“I never asked Comey for Personal Loyalty. I hardly even knew this guy. Just another of his many lies. His ‘memos’ are self serving and FAKE!” Trump said in one of his latest tweets.

The president again called Comey, who has said he took detailed notes of his meetings with Trump, a “slime ball” and said he “stupidly” handled a probe into Trump’s 2016 election rival Hillary Clinton.

In another tweet, the president undertook a mini-review of Comey’s memoir. 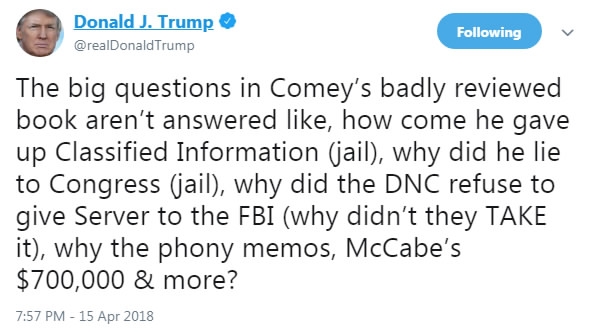 The jumble of references appeared to allude to unsubstantiated accusations Trump has previously made claiming Comey lied in Senate testimony last May in denying he had served as an anonymous news source.

A Justice Department inspector general’s report released this week took aim at former deputy FBI director Andrew McCabe on similar grounds, finding that he improperly authorized release of information to a Wall Street Journal reporter in 2016 and misled investigators about it. 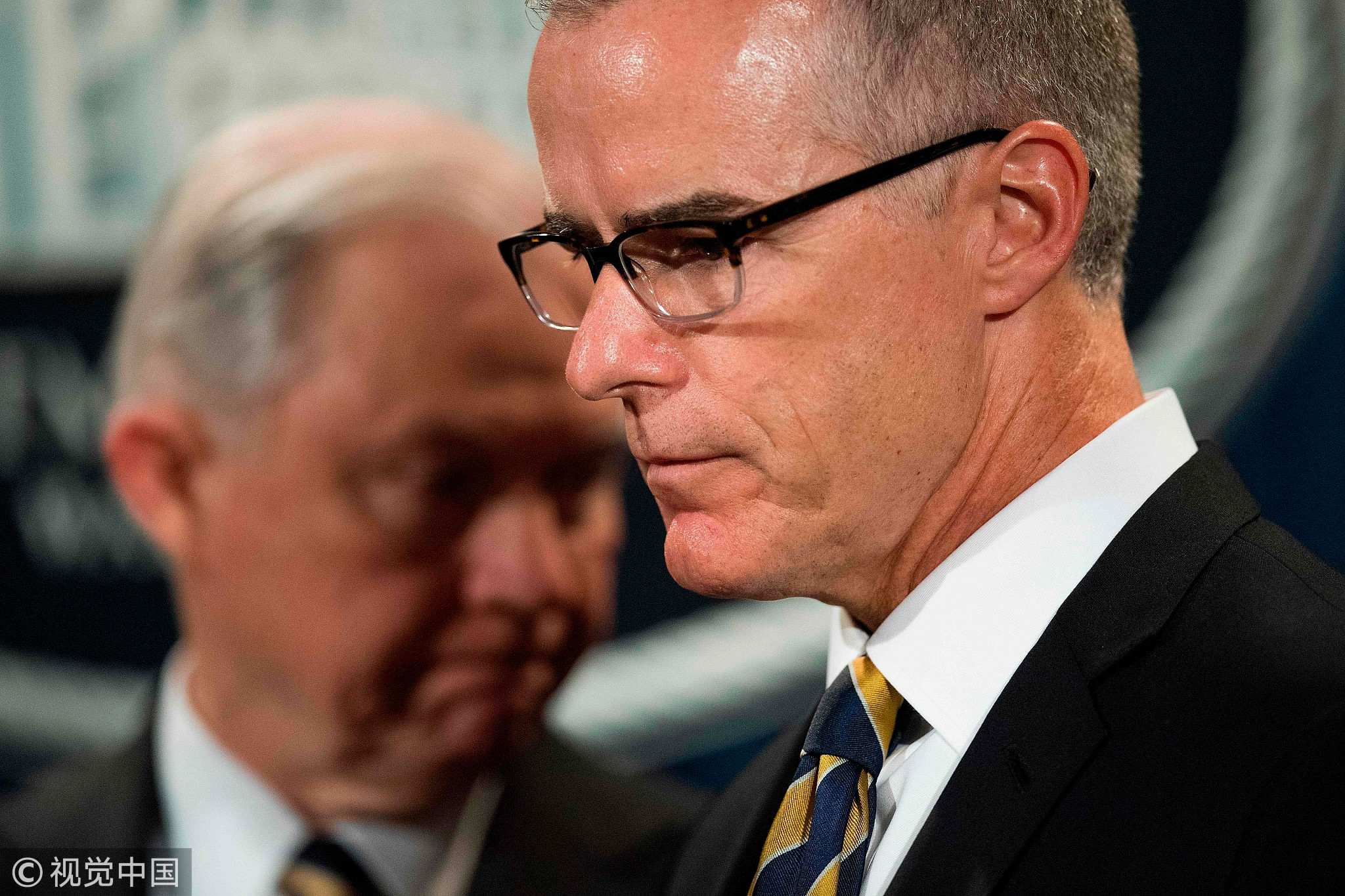 Former Deputy Director of the Federal Bureau of Investigation (FBI) Andrew McCabe (R) attends a press conference at the US Department of Justice in Washington, DC, on July 13, 2017. /VCG Photo

But McCabe, who was fired last month, has charged his dismissal was an attempt to discredit a probe by special counsel Robert Mueller into possible Trump campaign collusion with a Russian effort to sway the 2016 elections.

Read more: Graphics: Who has left the White House so far?

The escalating feud comes as the Mueller probe gathers momentum — and with the president under pressure on other legal fronts.

In the latest twist, the Justice Department revealed this week that Trump’s personal attorney, Michael Cohen, has been under “criminal investigation” for months by the US attorney’s office in New York.

Trump and his aides have countered Comey’s media blitz by attacking his handling of an investigation into Clinton’s use of a private email server while secretary of state.

Comey acknowledged in the ABC interview that his belief that Clinton would be elected president “was a factor” in his decision to reopen the email probe 11 days before the US election, a development that Clinton blames for her surprise defeat. 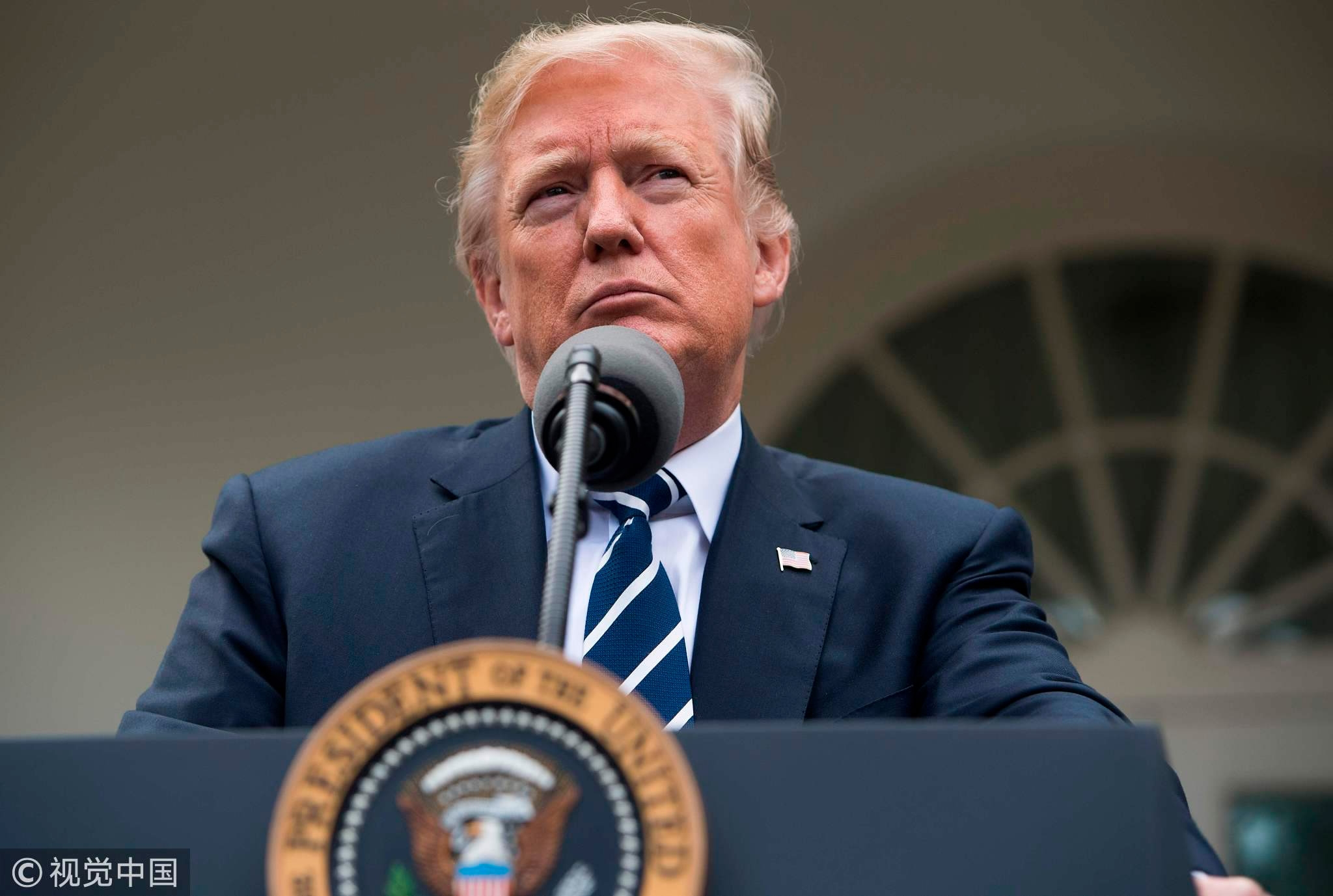 US President Donald Trump speaks to the press in the Rose Garden of the White House in Washington, DC, on October 16, 2017. /VCG Photo

“I don’t remember spelling it out, but it had to have been, that she’s going to be elected president and if I hide this from the American people, she’ll be illegitimate the moment she’s elected, the moment this comes out,” Comey said.

His comments echoed a quote from his memoir, in which he said it was “entirely possible” his concern over Clinton’s legitimacy “bore greater weight than it would have if the election appeared closer or if Trump were ahead in all polls.”

“Unbelievably, James Comey states that Polls, where Crooked Hillary was leading, were a factor in the handling (stupidly) of the Clinton Email probe,” Trump tweeted. 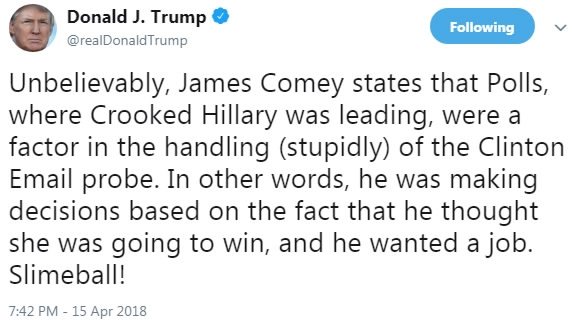 In another tweet he accused Comey of throwing former attorney general Loretta Lynch “under the bus,” an allusion to Comey having criticized Lynch in the memoir for suggesting that he refer to the Clinton probe as only a “matter,” rather than an investigation.

“Was she promised a Supreme Court seat, or AG, in order to lay off Hillary,” Trump asked.

Germany tells Britain to ‘stop the games’, time running out for...

US does not rule out cooperation with Taliban against ISIS-K –...