NEW DELHI A million school children were forced to stay at home, thousands of employees reported sick and long queues formed outside shops selling face masks on Monday as New Delhi struggled with its worst pollution for nearly 20 years.

The Indian capital’s government was considering whether to bring back a scheme to reduce traffic, a minister said on Monday, as air pollution remained many times above what are considered to be safe levels for a second week.

New Delhi’s streets were shrouded in a heavy gray haze of smoke, ash and other pollutants, and residents complained of breathlessness, watering of eyes, aggravated coughs and wheezing.

“We are now calling this a pollution epidemic. Our advisory to people is to stay at home, if possible work from home,” said K.K. Aggarwal, president of the Indian Medical Association.

Levels of PM 2.5, tiny particulate matter that reaches deep into the lungs, were above 700 in the city’s worst affected areas on Monday.

That is nearly 30 times a mean guideline of 25 micrograms per cubic meter on average over a 24-hour period set by the World Health Organization (WHO), which says outdoor air pollution killed 3.7 million people globally in 2012.

“It’s been a nightmare. My toddler and I woke up from a nap coughing as if pepper had been sprinkled on our throats,” said Tara Chowdhry, a Delhi resident.

“I climbed trees in this city. I played near India Gate. Now we are trapped in our living rooms next to air purifiers.”

As evening fell, the air quality improved as the wind picked up, but it was still at levels considered unhealthy.

Children have been among the hardest hit. Many crammed into Shishu Sadan children’s hospital in west Delhi for respiratory spasms and aggravated asthma, pneumonia and bronchitis.

“A few months ago it was dengue and chikungunya in Delhi and now we have this,” said paediatrician Lavraj Gupta, referring to disease outbreaks in the city of 17 million, many of whom live without access to clean drinking water and basic sanitation. 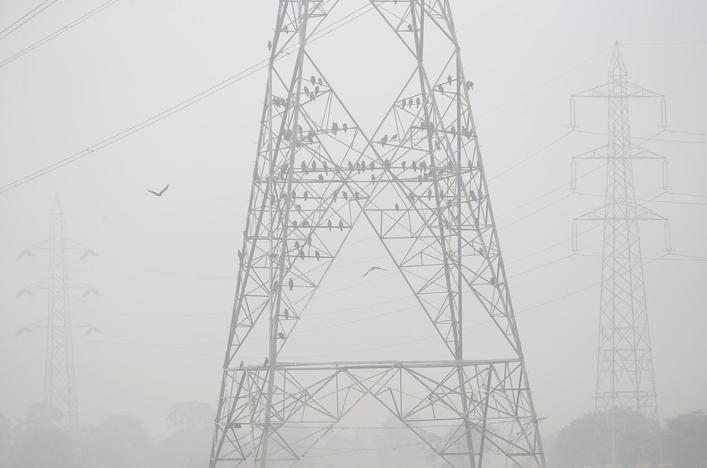 A combination of smoke from burning farm residue in surrounding states, fireworks for the Hindu festival of Diwali, dust from construction work and vehicle emissions have pushed pollution levels to their highest in 17 years.

Mohammad Kamil, manager of a store that sells face masks, said he used to sell about six masks on average in a week, but now they had 150 to 200 customers a day.

“We have run out of stock, but we are taking orders. We will provide it to everyone,” he said.

The demand for air purifiers also jumped, both from locals and foreigners working in India.

Between 5 and 10 percent of the workforce in Delhi and its surrounding areas had reported sick over the past week, the Associated Chambers of Commerce and Industry said in a survey of 150 companies.

It warned that the pollution could deal a blow to “brand India”, as the country seeks to attract investment and create hundreds of thousands of jobs for its young population.

India, the world’s fastest growing major economy, is home to four of the world’s 10 cities with the worst air pollution, the WHO said in May. New Delhi ranked 11th.

Delhi Health Minister Satyendra Kumar Jain said the administration was preparing to restrict the use of private vehicles through the “odd-even” scheme that was introduced temporarily last winter to combat pollution.

Under the system, cars were allowed on the road only on alternate days, according to whether their number plates were odd or even.

“There is a review meeting later this week. We are considering to bring back the odd-even scheme, it is one of many measures,” he told reporters.

Delegates attending a global conference on controlling tobacco consumption said they were taken by surprise by the level of pollution.

“I was shocked, did not expect this. It’s kind of funny that we are at a conference that aims to have cleaner air and are at a venue that does not have that,” said Irene Ryes, a delegate from the Philippines.

British Prime Minister Theresa May was visiting India, and a reception for her at High Commissioner Dominic Asquith’s residence, located in the heart of Lutyens’ Delhi, will go ahead on Monday evening as planned, an official said.

“Officially, we are saying nothing at all about pollution,” a British diplomat said.

Delhi authorities have blamed the governments of nearby states of Haryana and Punjab for compounding the city’s problems by allowing farmers to burn paddy stubble ahead of the wheat sowing season, even though the practice is banned.

“If we engage in any blame game, the issue won’t get resolved. The problem right now is Delhi’s 20 million people are finding it difficult to breathe,” said Anil Madhav Dave, federal environment minister.

Turkey will not ‘turn its back’ on Palestinian cause – President...

Turkey steps up to preserve academic heritage in the Middle East