A high-level Chinese military delegation is in India to promote “strategic trust” and “cooperation” between the two armies, which were locked in a 73-day border standoff last year.

The trip is another sign of the improving bilateral ties that have followed May’s informal Wuhan summit between Chinese President Xi Jinping and Indian Prime Minister Narendra Modi.

“China is willing to work together with the India side to earnestly implement the consensus of the leaders of the two countries about the development of bilateral relations, accumulate strategic trust, promote win-win cooperation, effectively manage and control differences, maintain border stability, and ensure the sound development of the relations between the two militaries,” Senior Colonel Wu Qian, Director General of the Information Office of China’s Ministry of National Defense (MND), said last Thursday during a media briefing on the delegation’s visit to India. 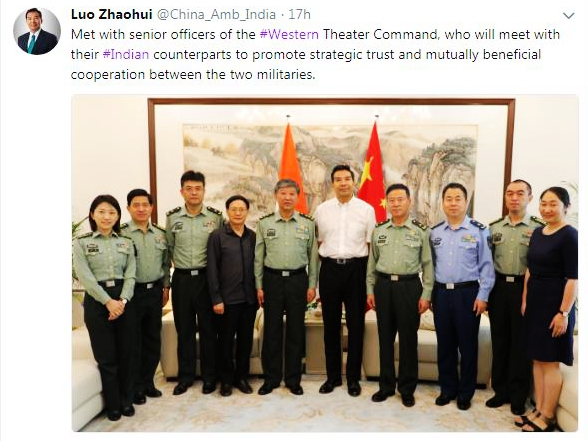 A screenshot of the tweet by Chinese Ambassador in India Luo Zhaohui.

On Monday, China’s Ambassador to India Luo Zhaohui hosted the Chinese military officers after their arrival in the Indian capital. “Met with senior officers of the Western Theater Command, who will meet with their Indian counterparts to promote strategic trust and mutually beneficial cooperation between the two militaries,” Luo said in a post on his official Twitter account.

On Tuesday, the 10-member Chinese delegation arrived in Sukna, in India’s eastern state of West Bengal, where Lt Gen Liu led the Chinese side in talks with counterparts from Indian Army Eastern Command’s 33 Corps led by Lt Gen Abhay Krishna. Sukna is the headquarters of 33 Corps which is tasked with guarding India’s border with China and Bhutan around the Donglang region.

The talks were focused on confidence-building measures.

“This visit by the Chinese military delegation to the military headquarters at Sukna is a significant step forward towards increasing interactions at military commander’s level and implementation of various agreements to maintain peace and tranquility on the borders,” said a media release from the Indian Army’s Kolkata-headquartered Eastern Command.

The Chinese delegation is scheduled to be hosted at Fort Williams on Thursday and leave India the following day. 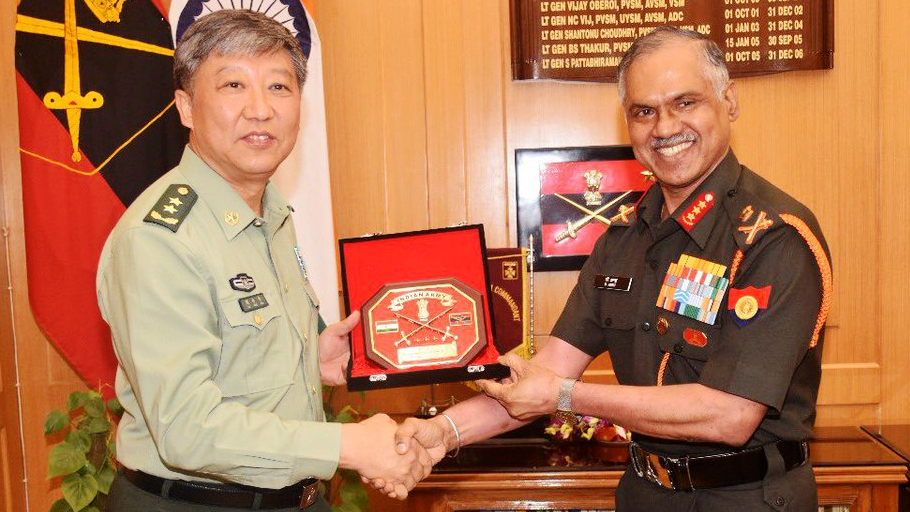 The current visit is also being seen as an opportunity to revive the talks of establishing a military hotline between the two commands, according to Indian media reports.

The proposal, first made in 2012, was nearly agreed upon by both the sides in April 2016 during then Indian defense minister Manohar Parrikar’s visit to China, New Delhi-based ThePrint.in news portal reported. But the idea went into cold storage after India signed a logistics support agreement with the US as well as the Donglang standoff last year, the report added

This round of dialogue could further pave the way for joint India-China army exercises that have been held every alternate year since they began in 2007.

In another sign of thawing equation between the two militaries, soldiers from both sides participated in a special border yoga session to mark International Yoga Day last month, the Chinese Ministry of National Defense revealed. 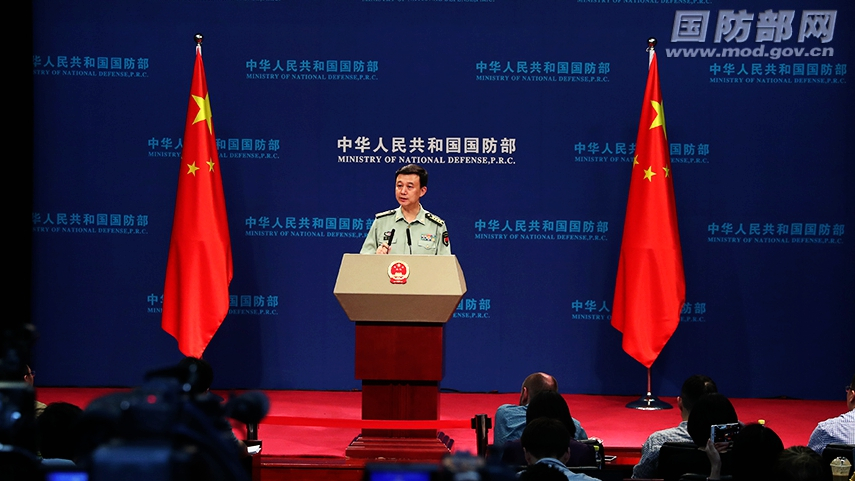 “I expect more extensive friendly cooperation between the two sides and accumulation of mutual trust so that we can maintain peace and stability along the borders and fully implement important consensus reached by leaders of the China and India,” he added.

Analysis: Is India softening its stand on China’s BRI?

England lost to Italy in Euro 2020 final at Wembley