China on Thursday morning launched a rocket developed by a Chinese private company from a launch center in northwest China.

“Chongqing Liangjiang Star,” launched at 7:33 a.m. BJT, was developed by OneSpace, a Beijing-based private company with a manufacturing base in southwest China’s Chongqing Municipality.

The nine-meter-long, 7,200-kg rocket can reach a maximum altitude of 38.7 kilometers and a top speed of more than 5.7 times the speed of sound, according to Shu Chang, founder and CEO of OneSpace.

Powered by a solid fuel engine developed by OneSpace, the rocket can travel for around five minutes, or a distance of 273 kilometers, and its control system can be customized to meet customer’s demands, Shu said. 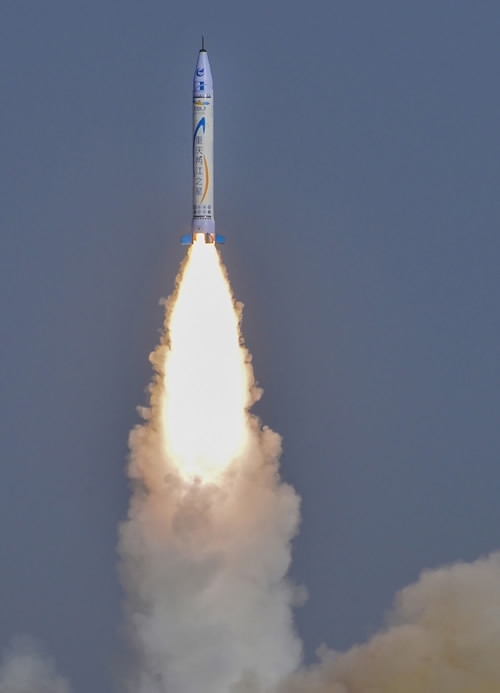 The rocket is also equipped with wireless communication devices and low-cost energy sources which allow the design of rocket systems to be simplified, according to Shu.

“This is the first commercial rocket developed by our company,” he said.

The rocket was launched for OneSpace’s customer Shenyang Aircraft Design Institute under the Aviation Industry Corporation of China, Ltd.

In 2014, China issued a series of guidelines allowing private capital to enter into several key fields, including commercial aerospace exploration.

Established in August 2015, OneSpace is China’s first private company with a license to develop carrier rockets.

The company has two rocket series, the OS-X and the OS-M. The former offers aerospace services for scientific research while the later is used to launch small satellites.

“Our focus is on the small satellite market,” said Shu, adding that many countries have demand for satellite launches, but few are capable of making rockets.

(Top image: The rocket “Chongqing Liangjiang Star” developed by private company blasts off from a launch center in NW China, May 17, 2018. /Photo via local media)

No country can lay claim to Syria’s oil reserves, – Turkey

UK companies to enrol in customs system for post-Brexit trading

US executed a woman for murder