LONDON (Reuters) – A British Royal Marine was jailed for 18 years on Monday after admitting that he worked as a bomb maker for dissident Irish Republican groups that violently oppose Northern Ireland’s peace process.

While serving in Britain’s military, Ciaran Maxwell, a 31-year-old Northern Irish Catholic, made and stockpiled pipe bombs, anti-personnel mines, handguns and enough chemicals to make more than 100 kg of explosives.

Although police said there was no evidence he had deliberately sought to infiltrate the military, they believe Maxwell is the first serving soldier to have been convicted of a terrorism offence in such circumstances.

“I’m not aware of any others,” Commander Dean Haydon, head of London’s Counter Terrorism Command, said when asked by reporters.

Assistant Chief Constable Stephen Martin of the Police Service of Northern Ireland (PSNI) said Maxwell’s devices had been used in attacks by militants in the British province.

“There is a strong likelihood that items associated with Maxwell have made their way into the hands of violent dissident republican groups in Northern Ireland and four of these items have been used, three in the last year,” Martin said.

“Not all of those devices detonated. Some did.”

While the 1998 Good Friday accord largely ended three decades of violence between pro-British Protestants and republican Catholics, some dissident factions have continued to operate, occasionally carrying out bombings and shootings.

Maxwell had admitted in February preparing for terrorism acts, possessing cannabis with intent to supply, and possession of articles for fraud — namely bank and ID cards which he had stolen from his marine colleagues.

Aged 16, Maxwell was subjected to a violent assault by pro-British “loyalists” in his home town of Larne, north of Belfast, but whether this was a factor in his later actions is unknown.

“I think it would be wrong for us to speculate about a motivation,” the PSNI’s Martin said.

Maxwell joined the Royal Marines in 2010 and eventually moved to the 40 Commando unit, based in southwest England. Material later recovered showed that by 2011, he was already beginning to research how to make improvised explosive devices. 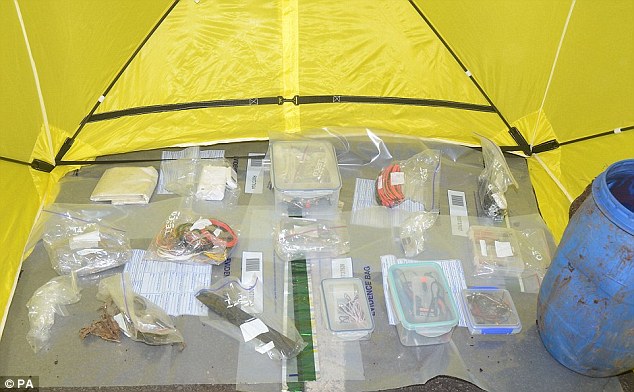 His actions went undetected until March 2016, when a member of the public found two blue barrels containing chemicals and other parts needed to make bombs buried in Carnfunnock country park, north of Larne.

Two months later, three more barrels were discovered by another member of the public in woodland west of Larne. The barrels were traced by DNA samples to Maxwell and in August he was arrested at Norton Manor army camp.

A million-pound search of woodland about 10 miles from his home near Exminster revealed 19 further hides while the PSNI discovered more chemicals hidden near Larne.

“You only gather an array of materials like this for one use,” Martin told reporters. “That’s to cause harm, destruction and potentially death.”

Haydon said Maxwell appeared to have been acting alone and that although he had extensively researched over 300 targets there was no evidence he was planning anything imminent himself.

“I would classify him as a bomb maker,” Haydon said. “At the moment we can find no wider network.”

Hundreds of thousands of deaths linked to long working hours –...