Britain’s Prince William on Thursday visited Jerusalem’s al-Aqsa mosque compound and Judaism’s Western Wall at the foot of the hilltop holy site at the heart of the Israeli-Palestinian conflict.

William is on the final day of his tour of Israel and the Palestinian Territories, the first official visit there by a senior member of the British royal family.

The prince shook hands with clerics and then entered Islam’s Dome of the Rock and al-Aqsa mosque. They are on a site revered by Muslims as the Noble Sanctuary and by Jews as the Temple Mount, where Biblical temples once stood. 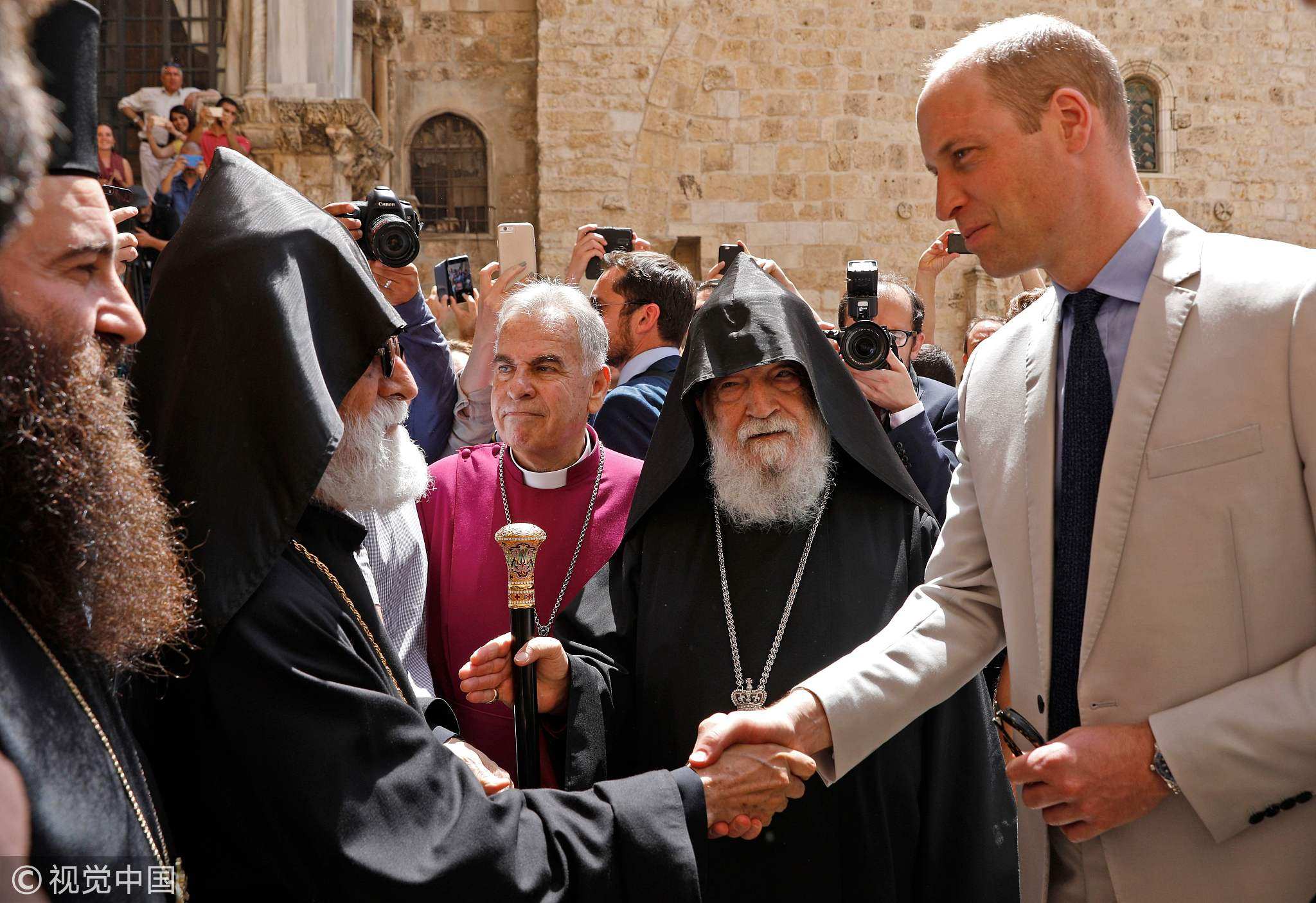 Britain’s Prince William shakes hand to Armenian clergy as he arrives at the Church of the Holy Sepulchre in Jerusalem’s Old City, June 28, 2018. /VCG Photo

Minutes later and accompanied by rabbis, William walked up to the Western Wall through a passage formed across the plaza.

Wearing a skullcap and following a Jewish tradition of offering a written prayer at the wall, he placed a note between its stones, rested the palm of one hand against them and leaned forward in silent reflection.

The Western Wall, the last remaining remnant of a retaining wall that surrounded a Biblical temple, and the Noble Sanctuary are in the walled Old City of Jerusalem, an area captured by Israel in the 1967 Middle East war and annexed in a move that has not won international recognition. 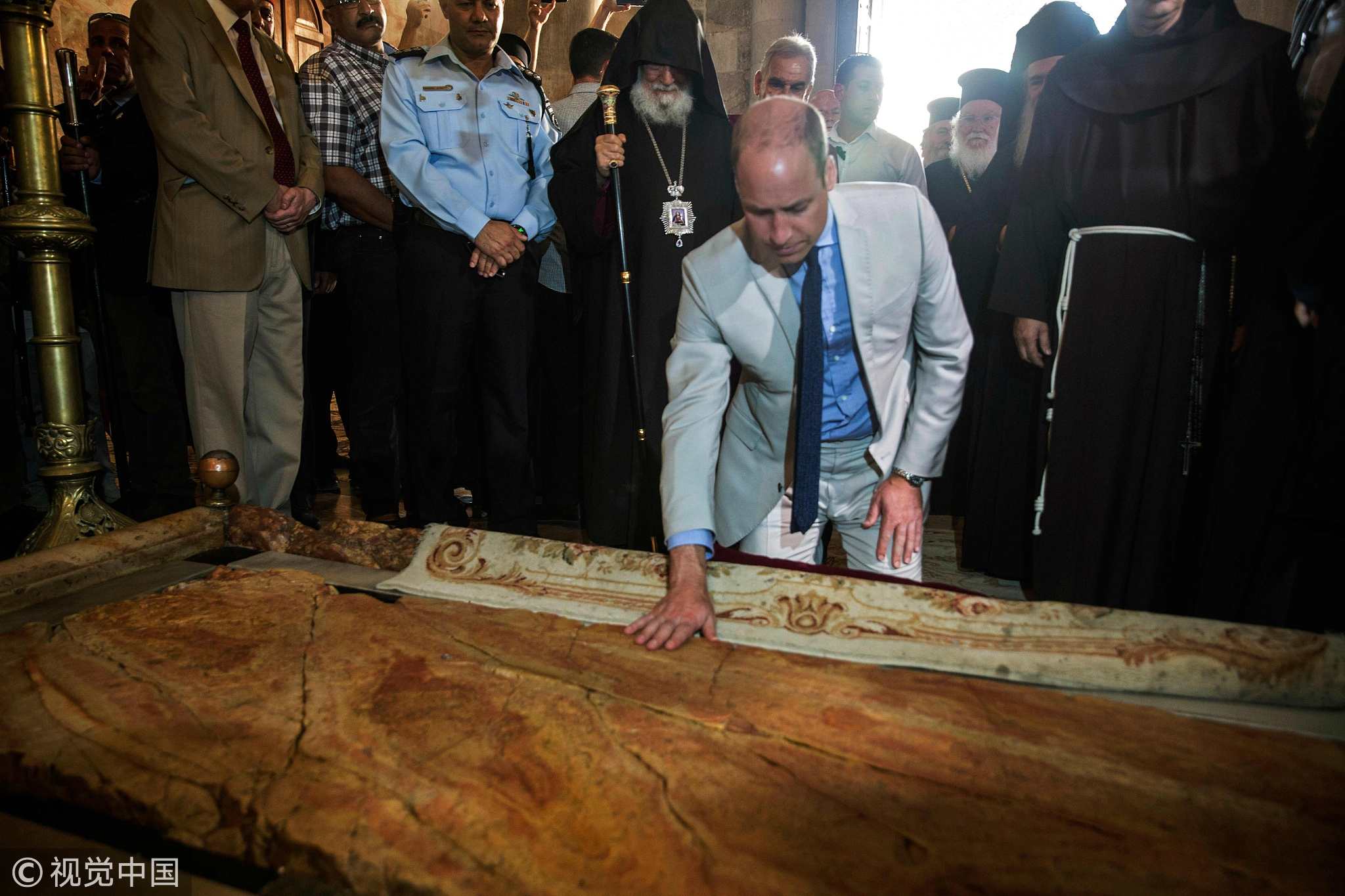 The future of the city is one of the thorniest issues in the decades-old Israeli-Palestinian conflict, and over the years the compound above the Western Wall has been the scene of clashes between Palestinians and Israeli security forces.

Before visiting the site, William, second in line to the British throne, made a pilgrimage to the Jerusalem tomb of his great-grandmother, Princess Alice, who was honored by Israel for sheltering Jews in Nazi-occupied Greece during the Holocaust.

Princess Alice of Battenberg and Greece, who was Queen Elizabeth’s mother-in-law, is buried in a crypt in the Russian Orthodox Church of Mary Magdalene on the Mount of Olives outside Jerusalem’s Old City.

A devout Christian, she died in London in 1969 and had asked to be buried in Jerusalem, next to her aunt, who like Alice had become a nun and founded a convent. 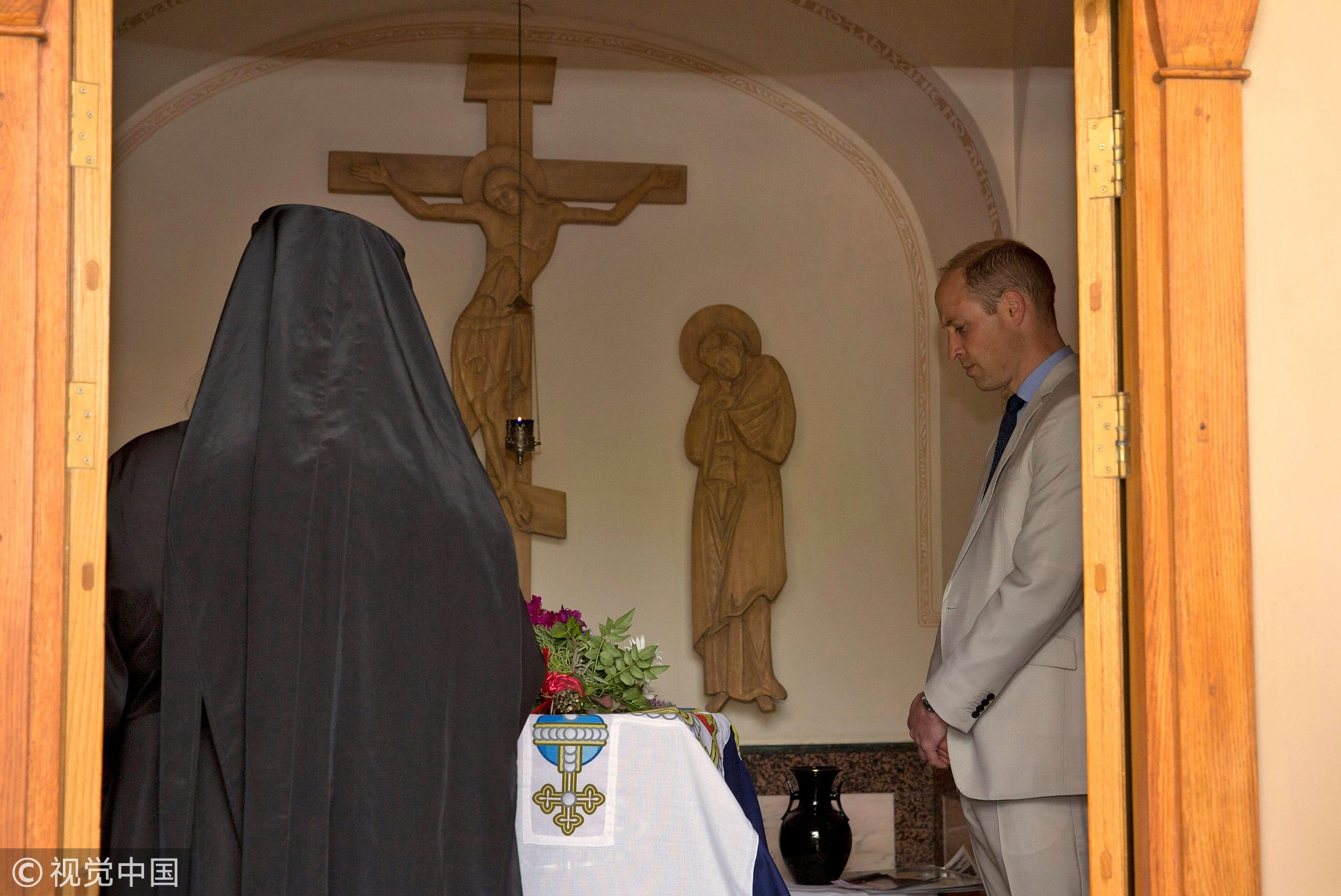 Prince William visits the grave of his great-grandmother Princess Alice of Battenberg during a visit to the Mary Magdalene Church, in east Jerusalem, June 28, 2018. /VCG Photo

In 1993, the princess was named as one of the “righteous among the nations”, the highest honor Israel’s Yad Vashem Holocaust memorial bestows on non-Jews, for hiding three members of the Cohen family in her palace in Athens during World War II.

Both William’s father, Prince Charles, and grandfather, Prince Philip, who is Alice’s son, have visited her grave site near the Garden of Gethsemane, in an area Israel captured in the 1967 Middle East war.

William met ancestors of the Cohen family at Israeli Prime Minister Benjamin Netanyahu’s residence on Tuesday after visiting the memorial to the six million Jews killed in the Holocaust. 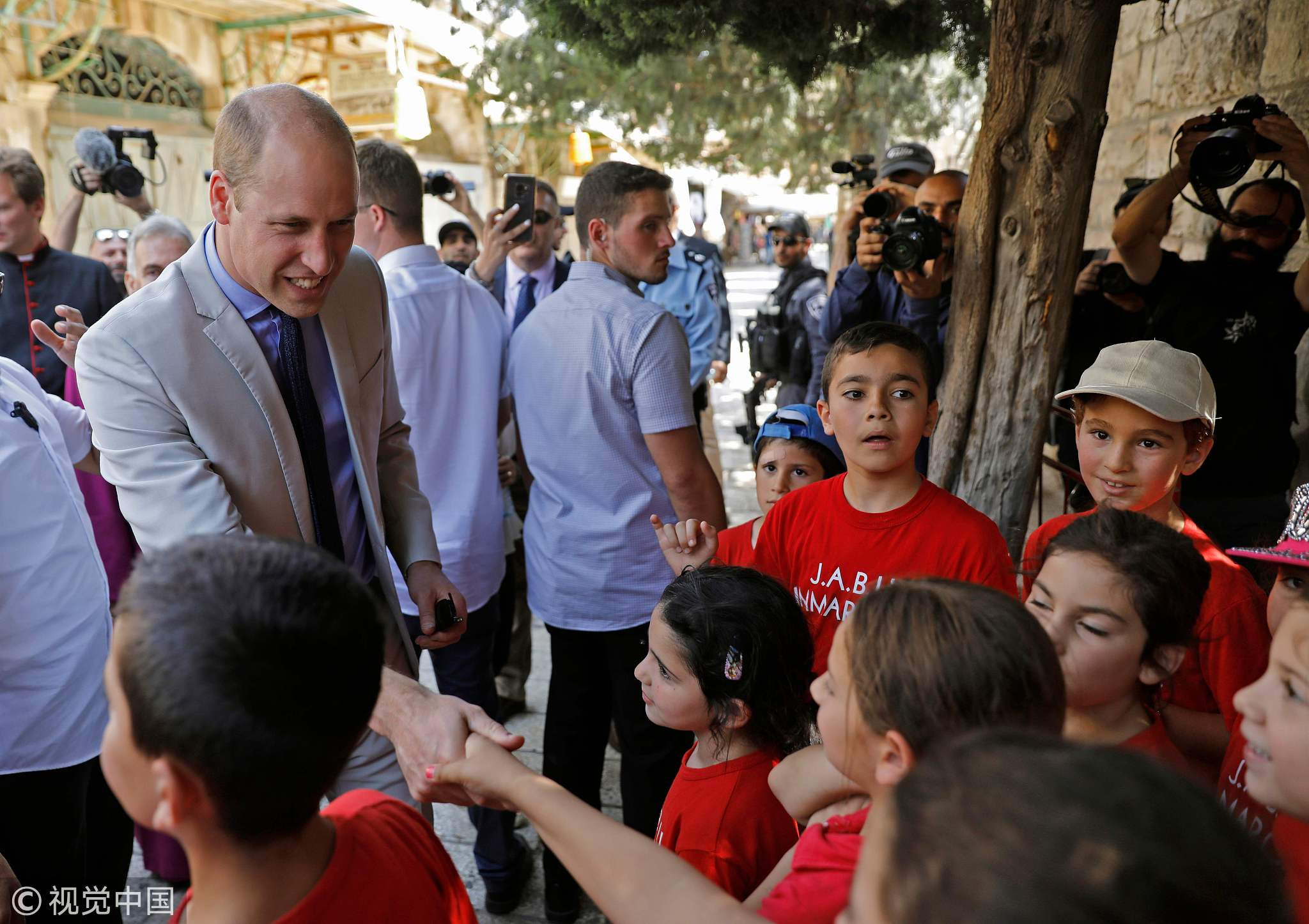 The prince visited the Israeli-occupied West Bank on Wednesday, meeting Palestinian President Mahmoud Abbas and touring a refugee camp, on a day which also took him to the Israeli coastal city of Tel Aviv.

In a speech in Jerusalem on Wednesday, he assured Palestinians “you have not been forgotten”.

Peace talks between Israel and the Palestinians collapsed in 2014 and the divide between the two sides has widened in the years since amid bouts of violence.

‘Using 1915 incidents for politics by US saddens Armenians’

May stands defiant against EU as Brexit talks hit ‘impasse’

British economy could shrink by 30% in Q2, finance minister warns...

The Kleptocrats Next Door : The United States has a dirty-money...

Germany heads for elections to decide on post-Merkel era

Why Japan sending naval forces to the Gulf?