Forces from an Arab alliance entered the airport in Yemen’s main port city of Hodeidah Saturday, the coalition-backed Yemeni military said, in the biggest offensive in the war against the Houthi movement.

Victory for the Saudi-led alliance in their first attempt to capture a strategic part of a well-defended city could put the Houthis in their weakest position in the three-year conflict, since Hodeidah is the group’s sole Red Sea port.

A defeat could also cut off supply lines to the Houthi-controlled capital, Sana’a, and possibly force them to negotiate as the world’s biggest humanitarian disaster ravages Yemen. 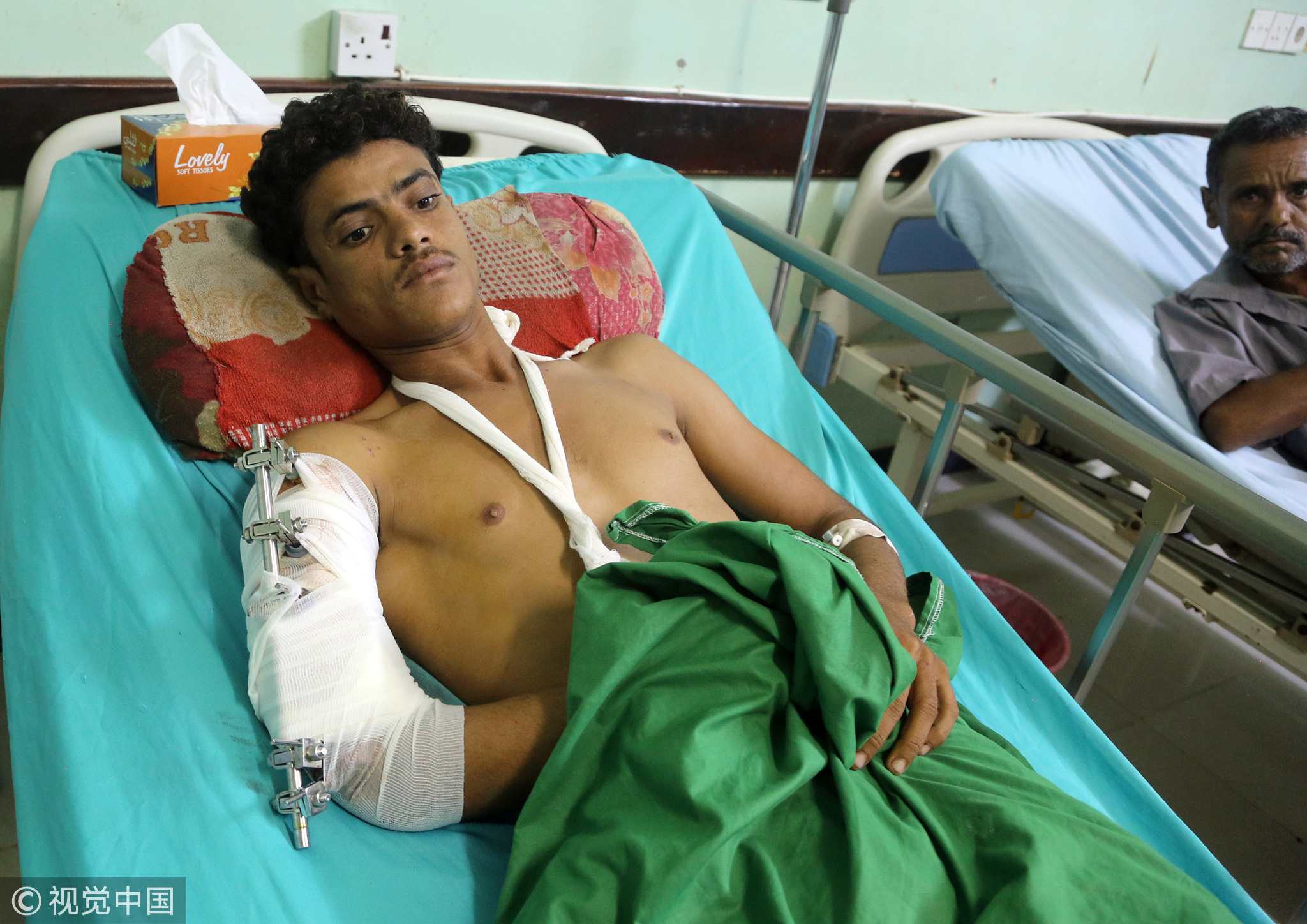 Injured Yemenis receive treatment at a hospital after being wounded during fighting between pro-government forces and Houthi rebels in the Red Sea port city of Hodeidah, June 15, 2018. /VCG Photos

“Army forces backed by the resistance and the Arab alliance freed Hodeidah international airport from the grip of the Houthi militia,” the media office of the pro-alliance Yemeni military said on Saturday.

Ground troops – which include United Arab Emirates forces, Sudanese and Yemenis drawn from various factions – have surrounded the main airport compound but have not seized it, a Yemeni military source and residents said.

“We need some time to make sure there are no gunmen, mines or explosive in the building,” the military source said. The military’s media office said technical teams were de-mining the surrounding area.

Fighting in the airport area led to the closure of the northern entrance of the western city Hodeidah, which leads to Sana’a, residents said.

That has blocked a key exit out of the city and made it more difficult to transport goods from the port, the country’s largest, to mountainous regions.

Aly Omar said he and his family spent three days trapped in the Manzar neighborhood abutting the airport as fighting raged all around them. 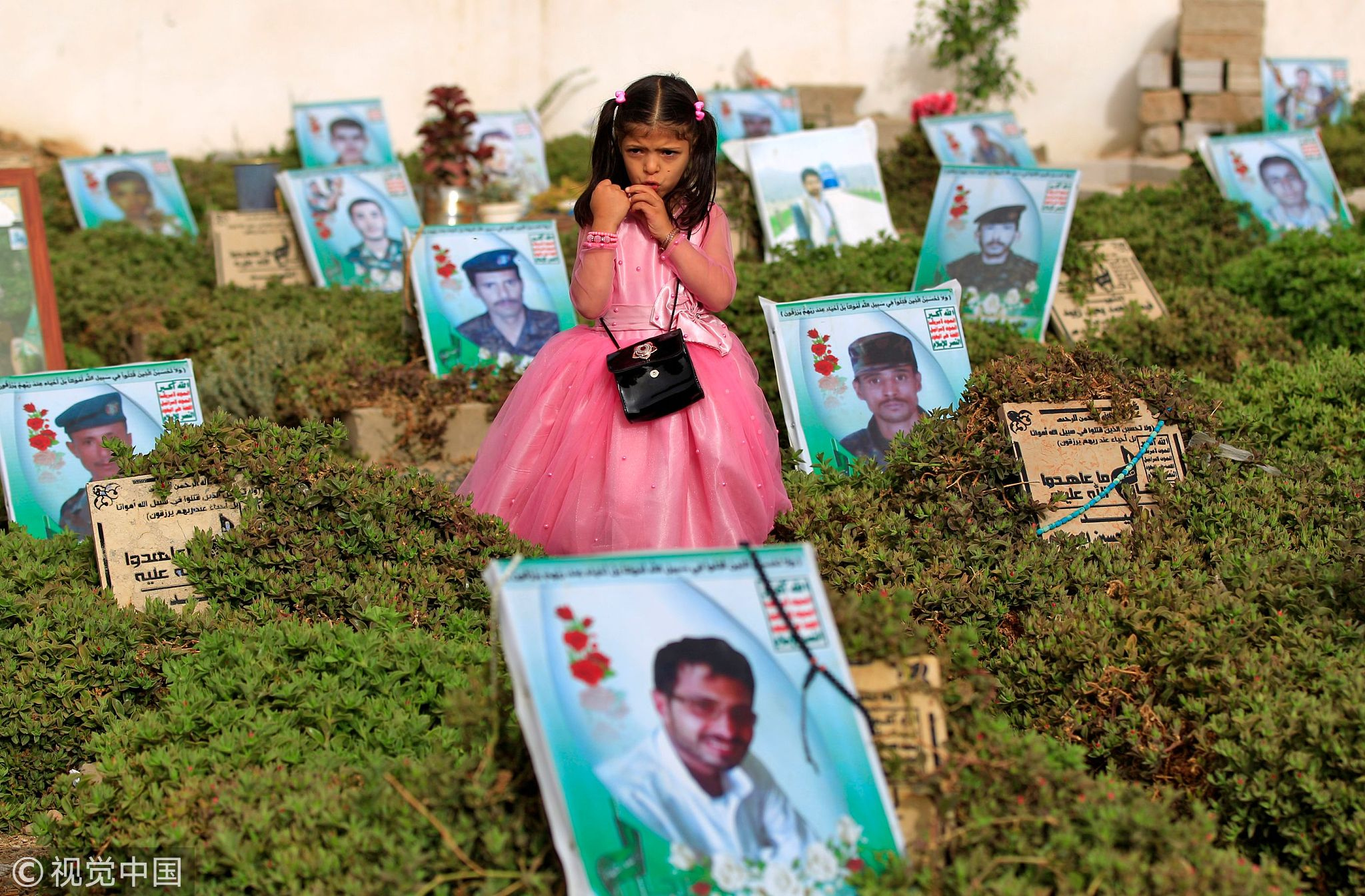 A Yemeni girl stands near the grave of a relative in a cemetery in the capital Sana’a, June 15, 2018. /VCG Photo

“We didn’t have any food, or drink or anything, not even water,” Omar said, standing in a hospital on Friday night beside his son, who was wounded by an air strike.

“I treated him on a bus after he was injured in an air strike, which is unacceptable. I call on the United Nations and the Red Cross to open a way for us to get out of the situation we’re in. Our kids, women and elderly are stuck …”

“We’re still treating people on the scene and transporting them to the hospital,” he said

If the Hodeidah fighting drags on, causing big coalition casualties and an outcry over a humanitarian catastrophe, it may work in the Houthis’ favor. If the Houthis are pushed out, the coalition could get the upper hand in the war.

The United Nations, which failed to find a diplomatic solution to head off the assault, fears the fighting will cut off the only lifeline for most Yemenis.

Houthis rule the most populous areas of Yemen, a poor nation of about 30 million people that had been destabilized by internal splits and al-Qaeda before the war erupted. The war pits the resilient Houthis, highly experienced in mountain warfare, against the Saudi-led coalition with its superior weaponry, including fighter planes.

The Shi’ite Houthi fighters have advanced on sandal-shod feet and by pick-up truck in battles across Yemen.

The offensive in Hodeidah could trigger a famine imperiling millions of lives, the UN has warned. Around 22 million people in Yemen depend on the humanitarian aid efforts, with 8.4 million at risk of starvation.

Air strikes, blockades and fighting have killed more than 10,000 people since the war started. The Saudi-led alliance intervened in 2015 to restore Yemeni government in exile and thwart what Riyadh and Abu Dhabi see as efforts by their archfoe, Iran, to dominate the region.