Chancellor Angela Merkel has received Russian President Vladimir Putin on his first bilateral visit to Germany since 2014. Their agenda listed Ukraine, Syria and piped gas for Europe but she dampened expectations.

“Controversy” was likely, Merkel said, adding her main goal was to maintain a “permanent dialogue” with Russia, despite “very serious conflicts worldwide.”

The two leaders had last met in Sochi in southern Russia in May.

Putin on arrival in Meseberg called on Europe to assist with refugee returns and reconstruction in war-scarred Syria, where Russia backs President Bashar Assad.

The German chancellor said she favored the stationing of UN peacekeepers to oversee ceasefire bids in eastern Ukraine under German and French mediation.

But, according to Putin, there had been “absolutely no progress” for the region where Russia backs Ukrainian separatists, and in 2014 annexed Crimea. 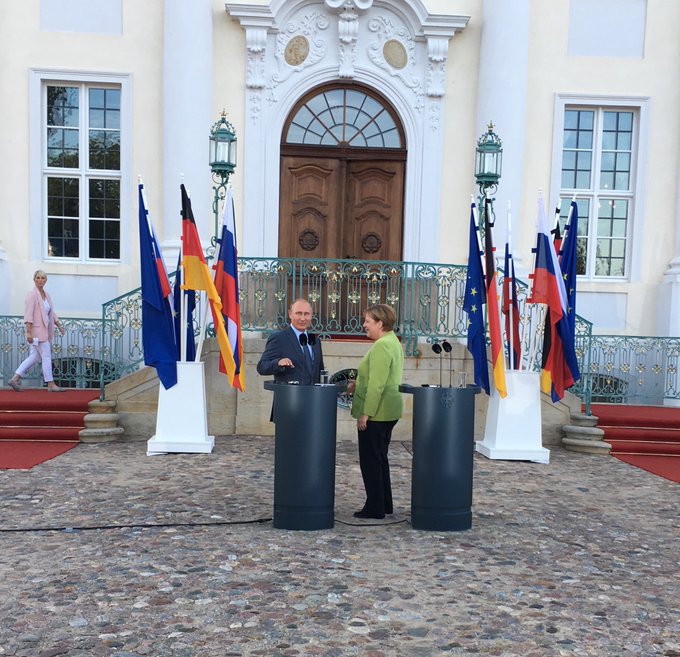 SHE SAYS GLOBAL „RESPONSIBILITY” AND MEANS RETURN OF MIGRANTS TO MORE STABLE #SYRIA – HE SAYS “ECONOMIC CO-OPERATION” AND MEANS HE WON’T GUARANTEE #UKRAINE’S ROLE ALS GAS TRANSIT COUNTRY IN TIMES OF #NORTHSTREAM. #MERKEL AND #PUTIN HAVE THAT AND A LOT MORE TO TALK ABOUT TONIGHT.

On Russian natural gas deliveries to Europe, Putin said he did not exclude the possibility that Ukraine could still earn from existing transit pipes once a new Baltic Sea project was completed next year.

“The main thing is that this transit through Ukraine, which has tradition, meets economic requirements,” Putin said.

Nordstream 2 will carry gas from Russia along the seabed directly to Germany, but Washington has warned that Europe will be too dependent on Russia.

Merkel said, from her point of view, Ukraine must still play a role in gas transits to Europe “even when Nordstream 2 exists.”

Putin, without referring to EU sanctions — like similar American clamps — on Russia, said Germany remained a “leading” trade partner and had some 5,000 firms, providing 270,000 jobs in Russia.

He claimed bilateral Russian-German trade volume had grown by 22 percent over the past year, with German investments in Russia amounting to $18 billion (€16 billion).

North Korea turns down US offer for official meeting

Masks to return on Tuesday but families told to plan for...

As COVID surges in Europe, officials warn of ‘twindemic’ with flu