China unexpectedly posted its first trade gap in three years in February as a construction boom pushed imports much higher than expected and as increasing U.S. protectionist rhetoric casts a spotlight on the export giant’s trade position.

The upbeat import reading reinforced the growing view that economic activity in China picked up in the first two months of the year, adding to a global manufacturing revival.

That could give China’s policymakers more confidence to press ahead this year with oft-delayed and painful structural reforms such as tackling a rapid build-up in debt.

“We suspect that this largely reflects the boost to import values from the recent jump in commodity price inflation, but it also suggests that domestic demand remains resilient,” Julian Evans-Pritchard at Capital Economics said in a note.

That left the country with a trade deficit of $9.15 billion for the month, the General Administration of Customs said. 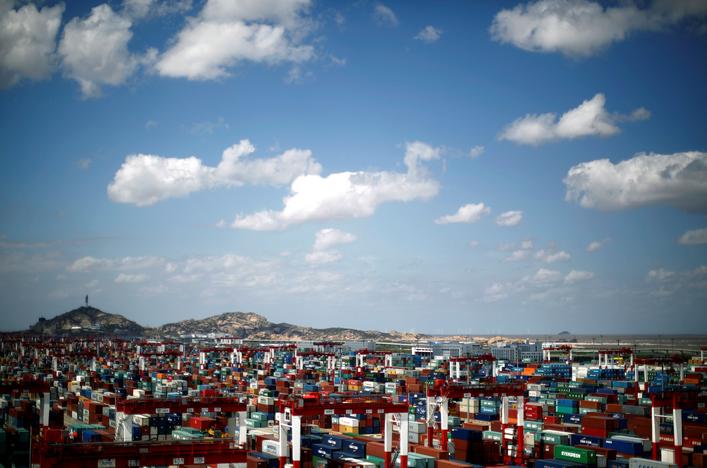 Most analysts, however, attributed the rare trade gap to distortions caused by the long Lunar New Year celebrations, which began in late January this year but fell in February in 2016. Many businesses shut for a week or more and factory production and port operations can be significantly affected.

“Like those earlier ones, we expect February’s to be a one-off and the full-year trade surplus will be close to 2016’s 3.4 trillion yuan.”

That also jives with strong China factory activity surveys which showed growth in both output and orders is accelerating.

“Looking ahead, we expect external demand to remain fairly strong during the coming quarters which should continue to support exports,” Evans-Pritchard said.

But he added that it was unlikely the current pace of import growth can be sustained as the impact of higher commodity prices will start to drop out of the calculations in coming months.

Analysts polled by Reuters had expected February shipments from the world’s largest exporter to have risen 12.3 percent in dollar-terms, an improvement from a 7.9 percent rise in January.

Imports had been expected to rise 20 percent, after rising 16.7 percent in January.

That would have produced a trade surplus of $25.75 billion in February, roughly half that recorded in January.

China’s February trade surplus with the United States fell to $10.42 billion, the smallest since February 2014. China exports to the U.S. fell 4.2 percent, while its imports from the U.S. rose 38 percent.

China’s first-quarter economic growth could accelerate to 7 percent year-on-year, from 6.8 percent in the last quarter, economists at OCBC wrote in a note on Monday, while adding that the pace may start softening in spring.

With the economy on much steadier footing than a year ago, the government has trimmed its economic growth target to around 6.5 percent this year, Premier Li Keqiang said in his work report at the opening of parliament on Sunday. The economy grew 6.7 percent last year, the slowest pace in 26 years.

As with last year, China has not set a target for exports in 2017, underlining the uncertain global outlook and fears of rising U.S. trade protectionism, but Li said China will take steps to steady exports this year.

Trump hasn’t made good yet on his campaign pledges of greater protectionist measures in the early days of his presidency, but analysts say the spectre of deteriorating U.S.-China trade and political ties is likely to weigh on confidence of exporters and investors worldwide.

The U.S. trade deficit jumped to a near five-year high in January, pointing to slower economic growth and posing a challenge for the Trump administration.

The U.S. reported its trade gap with China rose 12.8 percent to $31.3 billion in January, with China-bound exports dropping 13.4 percent.

Elsewhere, Trump administration trade adviser Peter Navarro said on Monday that the $65 billion U.S. trade deficit with Germany was “one of the most difficult” trade issues.

Meanwhile, the world’s financial leaders are preparing to meet next week for the G20 finance ministers in Germany, the first gathering attended by representatives of the Trump administration.

US youth suicides rise 29% after Netflix debut of ’13 Reasons...

Mafias taken over Law – Pakistani court announced bail for all...